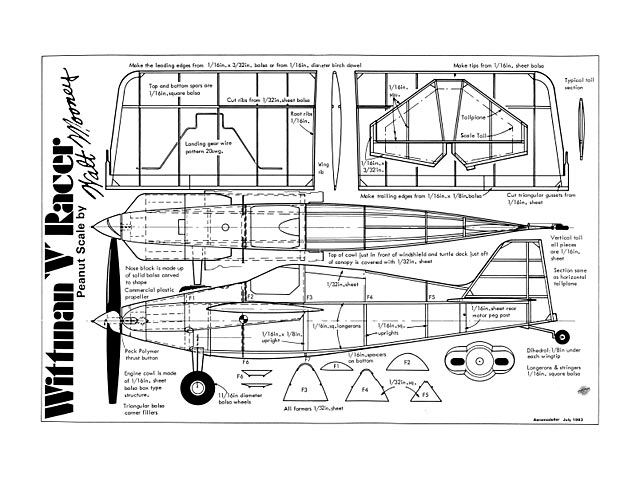 Note this here is the plan as printed in Aeromodeller, July 1983. The same design appeared in MB, July 1974.

Racing pilot/designer/builder Steve Wittman must have had modelers in mind whenever he dreamed up one of his famous racers. The lines are always clean, simple, and easy to reproduce.

To anyone who has even the slightest interest in aviation, Steve Wittman needs no introduction. This racing pilot from Oshkosh, Wisconsin, has been building winning racers for more than forty years, and is still piloting them in races wherever a race is promoted. His designs are famous for being light, simple, and fast. They are also famous because they have not followed the 'French curve' smoothness approach to aerodynamic efficiency. Thus, his airplanes have not always looked fast, but they have always been fast.

This VW powered racer is in the best tradition. It is a boxy, angular airplane. Nevertheless, looked at carefully it is streamlined in all the right places, has been simply built, and is obviously light in weight. One design approach Steve has used for years is the wire-braced wing. By using wire bracing, the wing can be made much lighter and thinner. Keeping a racer as light as possible is important, because a considerable portion of the drag of any airplane is induced by the amount of lift developed to hold the airplane up and the lower the weight the more quickly the airplane will accelerate, both on the initial takeoff, and after each pylon turn.

There are two intentional deviations from scale in the model; the area of the horizontal tail has been increased slightly, and the dihedral has been increased from nothing to an eighth of an inch. The wing has been designed to use wire bracing just like the real thing. Note that the top longerons are spread wider apart than the bottom longerons..." 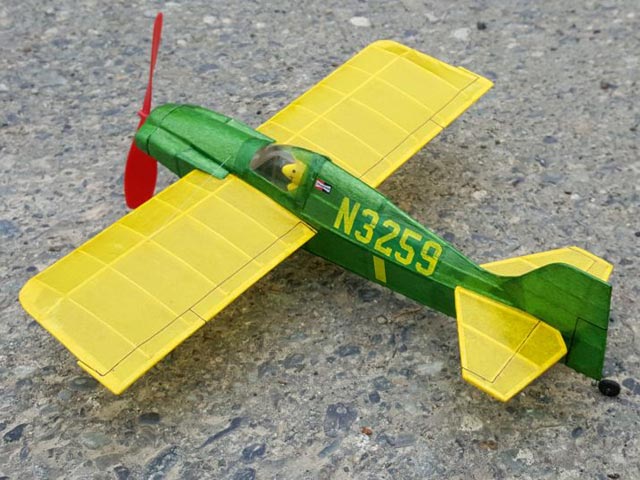