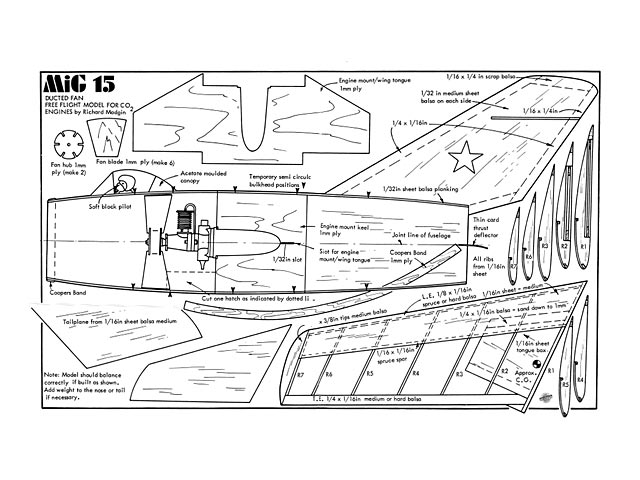 Fuselage Construction: The fuselage is circular in cross-section throughout. Start by cutting half-discs of medium/hard balsa with the grain perpendicular to the straight edge, and strengthen these with strips of scrap balsa cemented on either side. The edges of the formers should be either waxed or smeared with vaseline so that they do not become part of the ultimate structure.

The formers should then be pinned upright over the plan in their respective positions. Narrow strips (tapering from perhaps 1/4 in at their widest to about 3/16 at each end) of 1/32 medium balsa are then planked over the formers, pinning and gluing as you go. I used 'white wood glue'. Two such half-shells should be constructed identically. Don't worry that they do not retain their ultimate shape when removed from the formers. Before assembly of the fuselage halves, the complete wing/engine mount structure must be constructed, together with the fan etc.

Wing tongue/engine mount assembly: This is cut from 1 mm ply, slotted and glued together. Check that your engine's tank will fit the recess. The 1 mm ply engine mount ring is then added together with the ply gussets.

Screwing the engine to the mount is probably useless as it will more than likely be torn out on the slightest crash. We therefore have to resort to more crude methods and I tied mine in with terylene string. This should be tied round the engine just in front of the square mount-plate, and looped back round the ply mount, pulled tight and retained with epoxy. This is repeated on the other side. NB - The string must go right back to the back of the complete assembly, not round the mount ring.

Fan Construction: I was stuck here, so I looked all through the kiddies' toys, the old hair-dryer, etc, but to no avail, so I made my own. I'm sure my fan is not the most efficient, and it probably isn't the optimum size but it works well enough.

Cut two identical slotted discs from 1 mm ply as shown and mount them on a bolt, separated by a bush or a nut and clamp them to this spacer with two more nuts. Offer up one of the blades so that it slots into the discs at an angle.(mine are set at 45 degrees for want of a better guess!).

Rotate one of the discs slightly until the required angle is obtained. You will find that at least one of the discs needs its slots trimming due to the fact that the blades are flat and do not follow the spiral/helical shape that the slots invite.

When satisfied with the discs' respective positions, epoxy them to the separating spacer, without undoing the retaining nuts on either side until set.

Now carefully add the blades so that they are equi-spaced and equi-angled trimming the disc hub as necessary. Spot glue with balsa cement and lay the assembly flat and adjust while the cement sets.

I don't think it matters whether the blades point slightly forwards or backwards or not, as long as they all do the same. When satisfied with the blade positions, copiously fill the area between the blades at the hub with epoxy and leave to set. When set, the fan may be attached to the engine with a wide washer to protect the ply disc from the screw-head..." 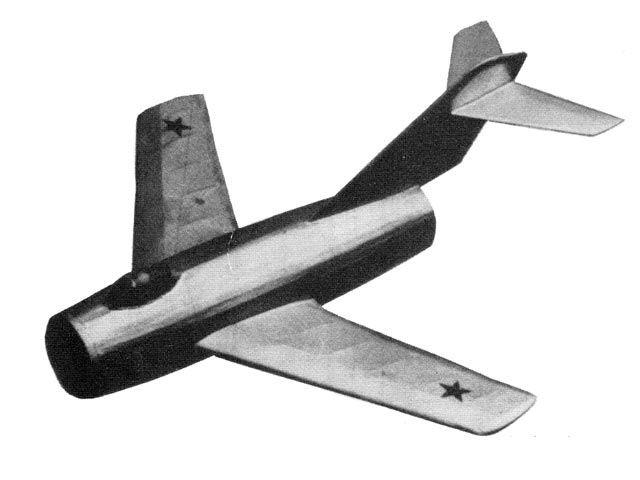