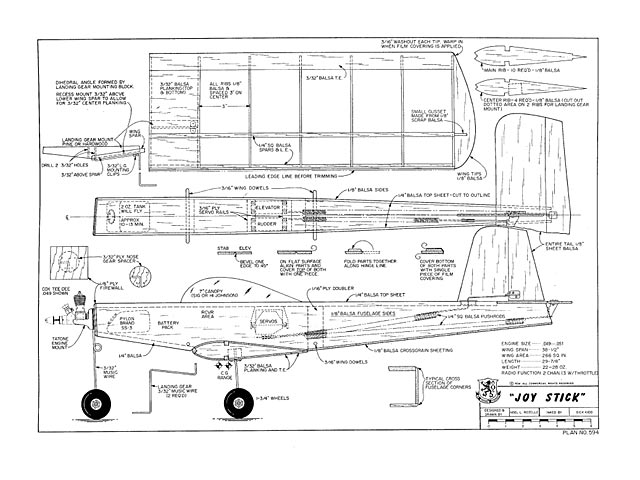 Quote: "The Joy Stick is the first of an entirely new breed of Half-A airplanes. Many months have been spent on the part of a number of individuals testing the basic desin, modifications to the basic configuration, as well as improving its building and flying characteristics. A great many prototypes have been built and virtually hundreds of flights logged on each before submitting the design for publication in R/C Modeler Magazine. In addition, RCM's Editor, Don Dewey, Technical Art Editor, Dick Kidd, and racing columnist, Don Dombrowski, flew one of the prototypes shown in the photographs as well as building another from scratch in order to check the ease of construction, building time, and parts fit. The Half-A Joy Stick, as I have christened it, also fits all AMA Sport Pylon Rules and comes complete with a good tricycle gear set-up which makes it ground handle and land very easily even for the novice.

However, the prototypes shown in the photographs utilize a Cox Tee Dee .049 and .051 with the control surfaces set for a tremendous amount of throw. With this particular set-up, the Joy Stick is definitely not recommended for the novice flyer. Here in Albuquerque, at an altitude of approximately 6,000 feet the .049 powered Joy Stick can easily keep up with a .60 powered Senior Falcon (oz6137) in speed and, at the 1,000 foot level at RCM's fying field, the aircraft flies at approximately 65 mph and can leave many higher powered models in its exhaust trail. Yet, its size is somewhat deceptive with a 38-1/2" wing span, fully symmetrical airfoil, and all-up wing area of 266 square inches. You might he tempted to power it with a .09 or 10 engine - don't! The added weight of the engine decreases from the flight capabilities of the Joy Stick and the .049 or .051 engine gives the Joy Stick power to spare. In fact, with a good T.D. .051 it can rank with the best Half-A pylon racers.

With a more docile engine, such as a Cox QZ and minimum throws on the rudder and elevator, the Joy Stick can be handled by the novice. The aircraft has been designed. however, to withstand any G-forces that you can put upon it. As an example, at a flight speed of approximately 60 to 65 mph the plane can be dived under full power from an altitude of 1,000 feet or more and then pulled straight up into vertical snap rolls without any undue stress on the airframe. With a one or two ounce tank installed, giving a Tee Dee engine a flight time of 8 to 13 minutes, you will find that this model will perform consecutive vertical eights, or outside loops as long as you are inclined to do them; do consecutive loops from inverted flight; roll; and fly inverted as long as you care to keep it that way..."

The Joy Stick is a Half-A sport model that was first presented as a construction article in RCM and subsequently kitted by Mile High Models, 4805 Baja Court NE, Albuquerque, New Mexico 87111.

With a wingspan of 38-1/2 in and a wing chord of 7 in, this low wing aircraft has a total wing area of 266 square inches. The all-up weight ready to fly was 25 ounces for a wing loading of 13.5 ounces per square foot. Our entire kit prototype was covered with orange Flight Kote and trimmed with yellow Flight Kote and DJ's trim tape. A Cox TD .049 with Cox's QZ muffler was used. A Cox 6/3 prop was used for all flight tests. The radio used for guidance was a Kraft 'Brick' with 225 mah battery pack. A 2 ounce pylon SS3 tank was utilized.

Upon opening the kit you are immediately made aware of the quality of the material used. All wood is first class as are all of the accessories. All parts were neatly separated and bundled in their respective groups. This is, without a doubt, one of the easiest kits to build we have seen to date. Every part in our kit fit perfectly and building time was approximately six hours including sanding. Covering the airplane and installing the radio took an extra 3 to 4 hours.

With regards to flight performance, with the controls set on minimum throws, the airplane is quite easy to fly and it can be flown by nearly any novice. However, with the control movements set for maximum throws, you will have one of the most exciting airplanes around. By the end of the third flight it is obvious that the TD .049 was plenty of engine and the QZ muffler didn't seem to cut the performance at all. Perhaps the flight performance of this little aircraft could best be summed up in one word: 'great'. Priced at $18.95 at your local hobby shop. "

Article, thanks to SimonPlatt.
Review. 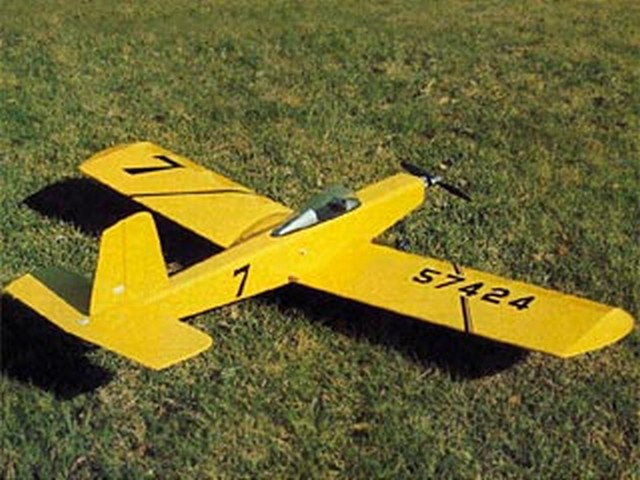 I built one of these a few days after the original article was published in RCM. I should have known not to believe the hype they gushed about in the magazine. You'll notice one of the models pictured has ailerons, that's the only way it will fly. After mine failed to turn on the first flight, I added ailerons and everything was fine. The bottom line: A low wing model without ailerons is a dog, build it with ailerons and it's a sweetheart.
DougSmith - 12/07/2015
Add a comment