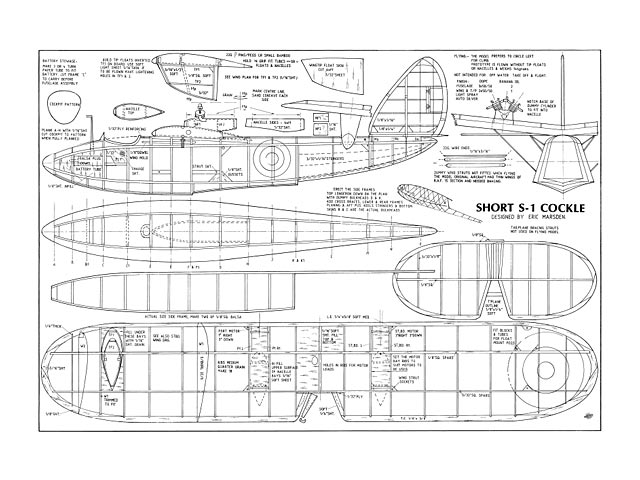 As some of you will know, my approach to 'scale' is a little cavalier. As long as the outlines are correct and to scale, the object of my effort is to produce a practical flying model, which I can fly for fun. If I can build a WWI type biplane without interplane struts, my model doesn't have them - they can only be seen at close quarters anyway, especially if one has bifocals, and a touch of glaucoma.

I fly for my own amazement, a credo I learned from my earliest aeromodelling tutors, and intend to do it for many years to come. Cockle is true scale, and is probably capable of being a scale competitor - not under my hand, I know my limitations as to decorative finish - but she flies like crazy. The first powered flight, after a couple or three test glides, made around eight and a half minutes, and caused me no little anxiety. Four years or so later, grubby and battered, she still put up some very creditable efforts at the '95 Middle Wallop meets.

She was only ever intended for fun flying, hand-launched over grass, but has made several nice landings on flood pools in our field. However, Clive Bunyan's enlarged version, with more power, comes off the water very nicely, he tells me.

References are easily found: Richard Riding's 'Ultralights', p.125, has a couple of pages of notes and photos, and the Putnam 'Short's Aircraft' has the history, pictures, and the usual small 3-view, from which I worked.

For those out in the bush, Cockle was launched on September 18th 1924, and after a series of test runs for adjustment of the wing and tail incidence, first flew on November 7th of that year, with test pilot John Lankester Parker at the controls. It was clearly very underpowered - Parker had to dress down to plimsolls and light clothing, in order to achieve take-off!

Lebbaeus Hordern, the Australian customer, not surprisingly, declined to accept delivery, the kite was returned to its shed for mods, and as N193, was evaluated by the Air Ministry test pilots at the Marine Aircraft Experimental Establishment at Felixstowe. The inadequate Blackburn 697cc vee-twins were exchanged for Bristol Cherub H's, fitted with reduction gears, and the aircraft was sold to the Air Ministry.

The thin RAF 15 wing still suffered excessive vibration at anything approaching full power, so the limitation on revs resulted in an inadequate performance, especially on take-off, and the aircraft became the object of experiments into corrosion in dural hulls.

THE MODEL: Study of the photographs in the reference books will reveal that both wing and tail are mounted on short, tubular struts. This is shown in the drawings for those of you with ultra-scale inclinations, and more skill and patience than I. My version has the wing and tail sitting on the fuselage, and produces a very practical, easily trimmed, stable, flying twin. As drawn, the thrust off-sets refer to the use of KP 01's unmodified, ie running in the same direction, because Derek Knight had not at that time made his left and right handed props.

Today, I would reverse the rotation in one unit, and use a pair of Derek's handed props trimmed to clear the hull, since they are of slightly larger diameter than his earlier props. Flown without dummy motors and wing floats, this is definitely a 'name and address' model, especially if built to 154 grams, the original weight of my version. At this AUW, in best trim, the climb is such that I'm sure that another ten or fifteen grams would not be a complete disaster for fun flying, so I think that the pukka scale job would readily carry the tree entangling excrescences of engines and floats.

Building is pretty straightforward, the usual fuselage sides laid out on the board, except in this case the upper longeron extends beyond the initial box frame, to carry the rear formers when the box girder is assembled..." 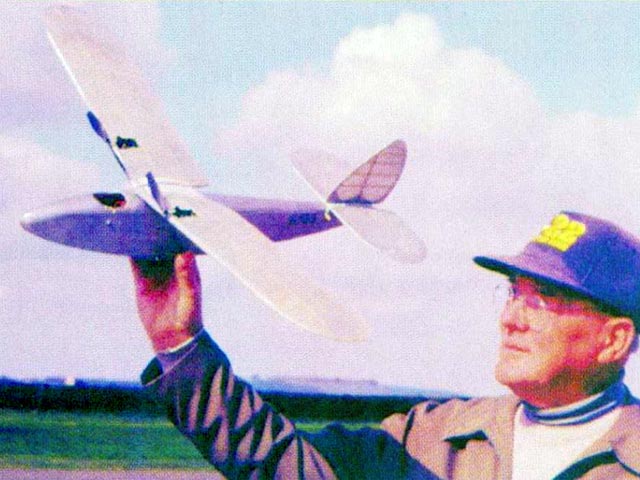 Being S.1 may mean this was the first of Short failures :-))* Paragon of obscurity, it rates AA+ in Miguel's Index of Cuteness, do a Google Image Search on this Cockle to see why. Eric Marsden must have agreed a quarter of a century ago, as he did a pretty scale model of this. It would probably have a better flying life than its unfortunate original ever had a chance to have.
* Ok, Shorts did have a few successes later, a certain Porcupine comes to mind.
Miguel - 05/11/2021
Add a comment