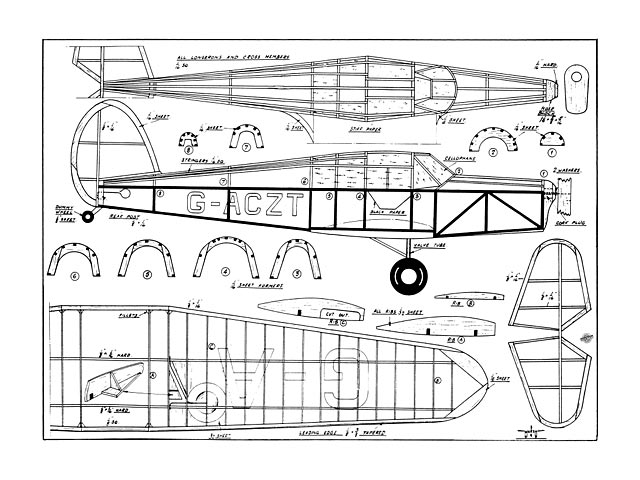 Quote: "The BA Eagle, by A Cruickshank. This model makes a very fine exhibition or flying model, flights of 200 yards easily being obtained. Follow the instructions carefully.

Fuselage: Build two sides over the drawing of 1/16 square balsa, using pins to hold the longerons and compression members in position. Be very careful with the cut-out parts of fuselage when the wing is mounted. Insert a hook of 24 swg wire in the rudder-post as shown, and cement fuselage sides to the rudder-post as shown. When set, cement former No.1 in position and leave to set.

The remaining formers can now be cemented into position, at the same time placing spacers of 1/16 square balsa between the longerons in the corresponding positions at the bottom of the fuselage. These spacers should be the same length as the space between the longerons caused by the formers. This is to give the fuselage a true rectangular section. All formers are cut from 1/16 sheet balsa.

Wing: A jig is used for the making of the wing ribs. The construction of this is simple. Cut the templates A and B out of 1/32 plywood and place A flat on a board. Now take 16 strips of 3/12 sheet balsa, slightly larger than A, and place them on top of A. Now place B on top of the 1/32 strips and try to get it to coincide as near as possible to the centre of A.

Push pins through B to A and clamp the whole together. Then sandpaper off the surplus balsa until you have what looks like a wide tapered wing rib with A the larger and B the lesser rib. Cut out the notches for the spars etc, using a hacksaw blade or fretsaw.

Cut the wing-tips from 1/16 sheet balsa. Pin spars of 1/8 x 1/16 down on the drawing and cement the ribs in their proper position.

Some of the wing ribs may be omitted if extra good flying performance is required. Then attach the trailing edge of 1/8 x 1/16 balsa, which is sandpapered to a tapered section. Add leading edge of 1/8 x 3/8 tapered to 1/8 x 1/16 and then cement in wing-tips. When set, crack wing where shown and cement, placing blocks of in. under each wing-tip to give dihedral angle and leave to set.

Tail Assembly: This is built over the plan in the usual way. Ribs are of 1/8 x 1/16 balsa and should be sandpapered to a streamline section after the cement has set.

Undercarriage: Use a pair of 1 in diameter hardwood balloon wheels. The undercarriage legs are constructed of 22 swg wire and bamboo, built up as shown in the drawing. Bind the joints with thread and cement.

The undercarriage legs may be covered with valve tubing to give a better finish, and it may be made to retract if desired. This is shown quite clearly in the drawing. The portion of the wing round the wells is covered with stiff paper. Push the legs of the undercarriage through the spars as shown and add the other strut of 1/16 bamboo rounded as shown in drawing. A hinge of soft iron wire is used if the undercarriage is to be made retractable, but this is shown quite clearly in the drawing.

Covering: Cover the model with Japanese tissue, using Gripfix as an adhesive. The grain of the tissue should run the length of the fuselage and along the chord of the wing. Cover the cabin where shown with cellophane. The domed top of the fuselage should be covered with strips of tissue between stringers. The engine cowl, ie portion between formers 1 and 2, should be covered with stiff paper.

Spray the whole with water from a scent spray and leave to dry. This will shrink the tissue. Coloured dope should not be used unless the model is intended for exhibition purposes, but use coloured tissue instead.

A good colour scheme is black fuselage and fin, silver wing and tail-plane, with the registration letters G-ACZT in reversed colours.

Assembly: Place wing on a board with the 3/4 in blocks under the wing-tips and cement the fuselage to the centre section in the proper position as shown in the drawing. If the model has been correctly built the wing will fit correctly into the cut-out part of the fuselage. Make sure you have the wing square with the fuselage. Leave for about 1-1/2 hours to set, then add the wing fillets.

The front and rear fillets are cut from 1/4 and 1/16 balsa, and the rest of the fillet is made of stiff paper. The assembly of the fin and tail-plane and under-carriage is quite clearly shown in the drawing.

Flying: The model is powered with four strands of 1/8 x 1/30 rubber. Give the motor about fifty turns and glide into long grass, and watch the behaviour of the model carefully. If the model stalls, add weight to the nose; continue doing this until you have a perfect glide.

Give the model about 500 turns; this is easily obtained when the motor has been lubricated and stretched, and fly the model."

Update 6/6/2022: Replaced the article with a more complete version, thanks to Pit. Note this includes a further drawing showing wing construction and UC gear assembly. 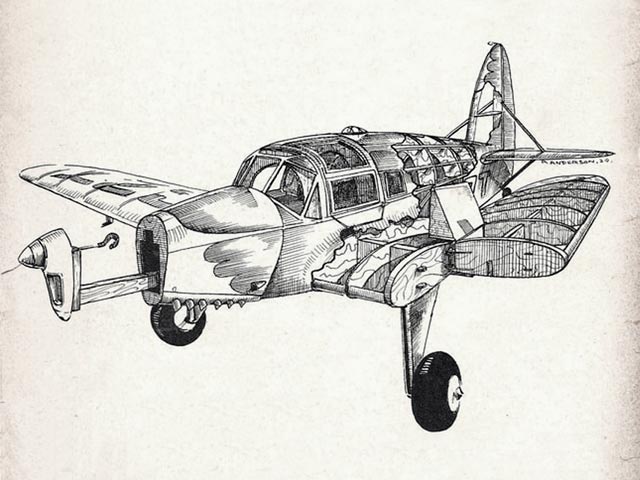 A very elegant example from the Golden Age. The plan is over 80 years old and the same principles still apply. The only thing I would change would be the sudden break by the cabin as seen in the plan view instead of a gradual curve as seen on 3-views. The source material Mr Cruikshank had available would be rather limited, to be on the optimistic side, so I can't blame him :-)
Miguel - 04/11/2021
Apparently this was one of the plans included with the book "Scale model aircraft that fly" by Towner and Boys, first published in about 1940.
Mike Hollamby - 04/11/2021
Add a comment