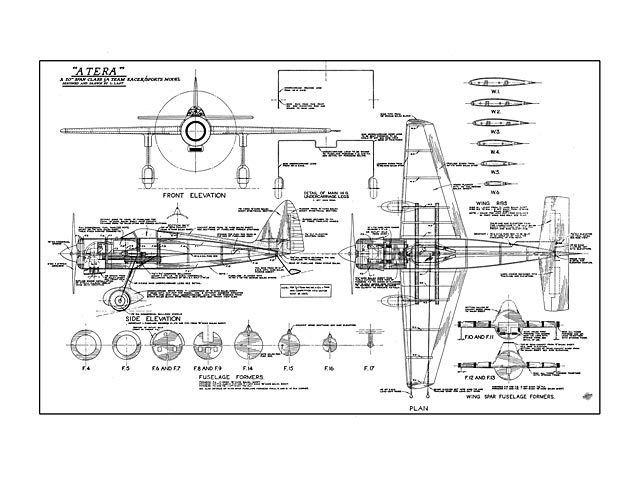 THE fully detailed plan really needs very little additional information to enable anyone who has previously built a C/L model to successfully complete Atera. The following notes do, however, suggest the best building sequence to simplify the construction, of this attractive little machine.

As you will see from the photographs Atera has been the result of a study of pre-war Japanese fighter design, notably the type 95 which it closely resembles. It would look very effective finished in Japanese colours with the Rising Sun insignia.

1.Construct bell-crank assembly complete with push-rod and lead-out wires. Note loops on LE wires and on push-rod for control horn to be formed only after all construction of model is completed.

6. Mark off engine bearer positions on formers F.6, 7 ,8 and 9, to suit type of engine to be installed and cut openings to suit.

9. Add formers F.4 and F.5 keels to F.3, and then sheet fuselage, allowing approx 1/8 in clear around cylinder head. 10. Add tail-skid, cockpit spine and framing, fin, rudder, tailplane and elevator assembly, centre the control bell-crank, add elevator horn to push-rod, and then cement it in position on the starboard elevator.

12. Add leading and trailing edges to ribs 1, 2 and 3. Cement ribs W.4, 5 and 6 into position, and when dry sheet wings. Add wing tips and form loops on lead-out wires.

The original model was powered by a Frog 150 Mk II. The colour scheme was black fuselage spine, fin and rudder and u/c spats, yellow fuselage, wings and tailplane, black and yellow checkerboard as shown in/the photos.

As the engine is enclosed and cannot be choked in the normal manner, open jet-needle approx. four turns, block one tank vent with finger and use fuel can to force fuel through to engine. This is usually sufficient priming to allow starting." 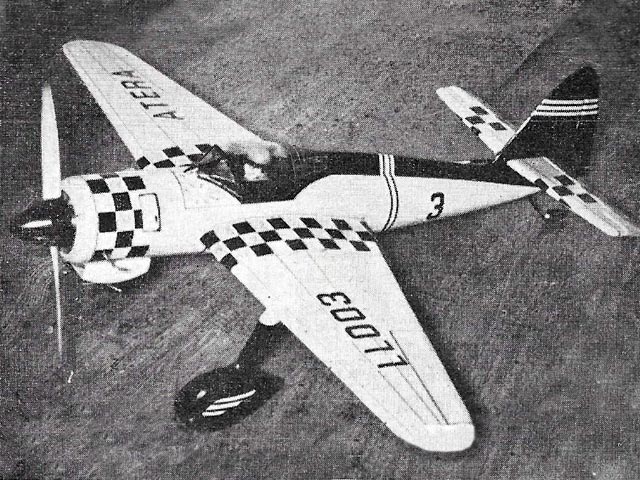 Great aggressive looks, the Japanese inspiration did occur to me even before I read the text :-) And the author went on to do a transparent perspective of his design, something one hasn't seen for many a year.
In our airmodelling world perspectives are pretty useless but they may have an artistic value much of their own, see for instance Hank Clarks's work at oz8044 or Doug Rolfe's at oz1926 and tell me I'm wrong :-)
Miguel - 02/11/2021
Add a comment