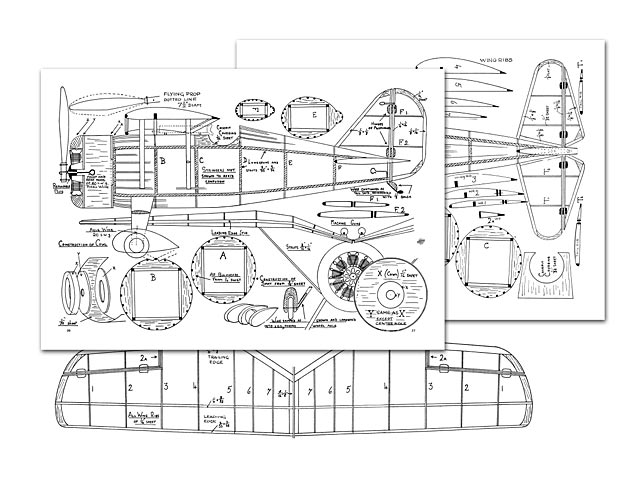 Quote: "How to Build a 1 inch Scale Flying Model of the POLISH FIGHTER. Here's a really snappy little job - and a real flyer, too. Easy to build, and cheap to make. Follow the plans. Our cover shows you the real thing.

How to Build The Polish Fighter. The Polish fighter, in its modified form, gives us a really good plane to scale down into a flying model without the usual modifications to tailplane areas and propeller diameters, etc. Needless to say, the model described here is of the all balsa variety, the methods of construction being familiar to most model builders today.

The parts can be pinned down on the actual drawings or on a tracing of them if they are required unsoiled. Parts such as wing ribs are traced in any case and printed on to the balsa by the usual method of covering the opposite side of the tracing paper with pencil scribble and using it like carbon paper.

The Fuselage: First build up one side of the main frame (shown with diagonal shading) from 3/32 x 3/32 balsa, the longerons and cross-struts being butt jointed to each other. When dry, remove this side, and make another exactly the same. These two sides are then joined by the cross-struts shown the top view of the body.

To each set of cross-struts the four sections of bulkhead are cemented, the slots having been ready cut with a nail file to take the stringers. The cowl is made as a separate unit later.

Cement all stringers of 1/16 x 1/16 position, noting that the cockpit section is made from 1/32 sheet completely with no stringers.

The Undercarriage: The legs are made from hard 1/8 flat balsa and sandpapered to a streamlined section. The wide end is cemented to the lower longerons of the main frame, not a stringer, and reinforced with 1/16 flat balsa fillets.

The spats are built up from three sections of 3/16 flat balsa, the centre one of which has its centre cut away to take the wheel. A small section about 1/16 deep must also be taken from the inside wall of the two outer sections so that the recess is 5/16 wide. When assembled, the spat is shaped to the usual streamlined section..." 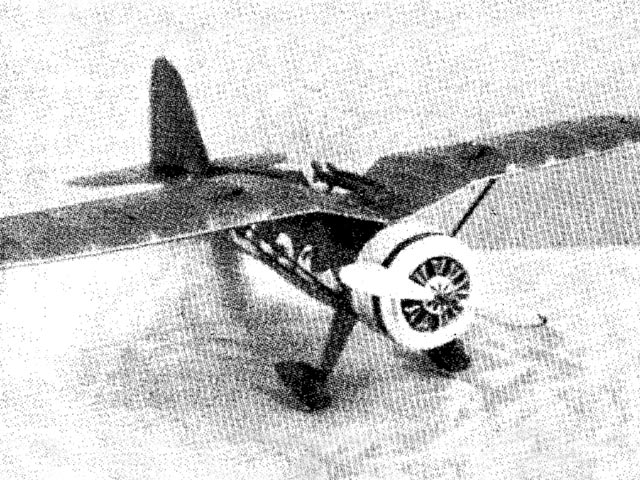 Another 'unidentified' aircraft from the 1930s, but this one is easy
It's a PZL P7.
Daithi - 01/11/2021
Got it, thanks. Have set ScaleType now.
SteveWMD - 01/11/2021
Sorry, but I disagree. Model looks much more like a PZL P.24. Compare shape of fuselage, compare cowling and take in to account, modelplan was published in 1936. Same year when the P.24 went into service in Poland.
Want to see the last surviving P.24? Come to Turkey, go to: https://www.youtube.com/watch?v=sFAZzQqyVMI
Robert Schlickewitz - 02/11/2021
Me, I have no idea. But wasn't the P.24 the export-only version? With the closed cockpit?
SteveWMD - 02/11/2021
Sir, you're a connoisseur as we use to say in France!
You're right, and you aren't right - both at the same time. You're right concerning the series P.24, closed cockpits. But look at the prototypes and early models: open cockpits.
But, I appreciate you too much, Sir, I don't intend to argue. Thanks for the great work you've done and best wishes to you and your charming wife.
Robert Schlickewitz - 02/11/2021
Actually, I believe this model depicts the PZL P.11 variant. The P.7 had a slightly shorter nose with individual cylinder fairings, a townend ring, or a short-chord cowling.
The P.11 had a few design changes over the P.7, most notably, the use of a long-chord cowling, as shown in this model. The P.24 variant, like Steve mentioned, was an export version with an enclosed cockpit.
RC Yeager - 02/11/2021
Greetings, First of all, let me say I am in favor of healthy discussion and debate. However, I’ve got to wonder if this particular subject is a little out of control. I don’t think this argument can ever be settled.
I used to have a large collection of old aircraft magazines, including many pre-WWII issues. Air Trails, Model Airplane News, Flying Aces, plus a few random titles. I remember the articles about new aircraft announcements. A small, grainy photograph, the size of a business card. If you were lucky, there might be a paragraph of text, or maybe a small three-view of the aircraft in question. I think that’s the basis of this “Polish Fighter” design.
To my eye, this design barely resembles a PZL design. Sure, the engine is round, and the gull wing is OK, but look at the fuselage: it’s a porker. It looks more like a Grumman biplane fighter than it does a PZL design.
I think this design is a nice looking model based on the scant information available at the time. I don’t think you can nail it down as a PZL P.XX, let’s just call it a “Polish Fighter”, and leave it at that.
It’s time to get on to the really serious question: whether the Mitsubishi Zero is a copy of the Hughes H-1, the P-36, or the Polikarpov I-16.
Let’s be careful out there.
James Hickman - 03/11/2021
Add a comment