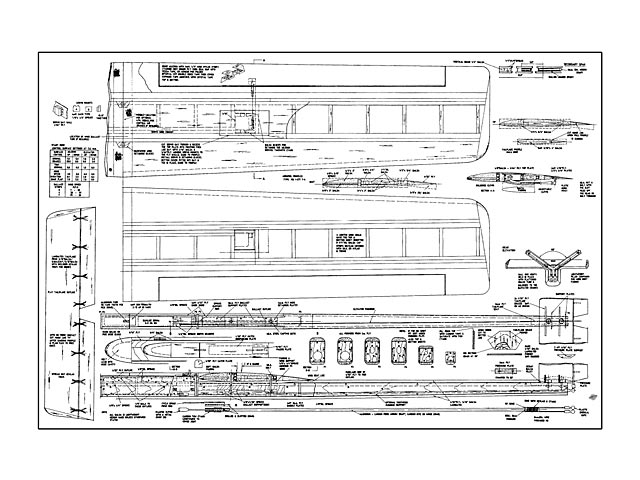 Quote: "Where there's a will, there's a way. John Cooper decimates the price of a good, all round, 60 inch pylon glider.

The Sheffield Society of Aeromodellers have been running competitions for some years now and within this membership are some very expert and competitive pilots indeed, with a wealth of design and building expertise and experience. So it is with some trepidation that I write this article.

Having only flown in one pylon event to date with a non-competitive 40 in 'batabout' model, one soon realises ones own - and ones model's - limitations when competing against this sort of opposition. When four gliders are in the air at once, all trying to fit into the same piece of sky, sometimes on different laps and hopefully with no mid-airs, one can imagine the adrenalin really gets going. I must say that, despite my non-competitiveness, I can't remember having quite so much nerve-racking fun in a long while. After all, it's not the winning but the taking part that counts, they say!

After this experience, I wanted - nay needed - a competitive racer. It is to this end that I have designed the latest 'Mistress' in my life. To date she hasn't had her timber tested in a race but by the time you read this she will have. I can say at this time in all honesty that she has a speed range that iS'very exciting indeed.

In thermal mode, in very light lift and wind speeds of 5-8mph, she will soar alongside much lighter loaded models, as long as speed is maintained.

When the lead goes in because the wind is making you stand with one foot firmly planted behind you and you still get pushed backwards, she really moves with only a hint of weathercocking if you bleed the speed off. Tell me if I'm wrong! The majority of models of this type are of glass fibre these days with a price tag in excess of £120. The real woman in my life wasn't too pleased with the idea of me spending that amount of pennies, so here we go again! Only this mistress is called 'Timberleena', mostly organic and slim with it!

Options: Whilst this model was designed specifically with the use of a computer transmitter in mind, requiring a receiver with a minimum of five channels, it could be flown, I am sure, on two channels only. Quite how you get it to land is another matter, because the air brakes are a must for this slippery fish.

You could do it on three channels though, by splitting each aileron and operating the inner sections via a torque rod driven by a fourth mini servo in the wing centre section, controlled by the transmitter throttle lever channel. If your receiver won't go in the space available, just widen formers F1-F5, to allow more space inside. The extra frontal area is not going to slow the model down that much anyway and you will be able to put more lead in, for those days when the wind is 40+mph and you want to prove to yourself that you're a man/person (sorry, ladies!), not a mouse and fly IN THAT WIND?!

General Notes: WARNING - good ventilation is needed to avoid the inhalation of cyano vapours and please use a face mask/filter to avoid the inhalation of graphite dust. The use of such a thin aerofoil section, less than 3/4 in thick, makes a main spar essential for those high-G pylon type turns and carbon is the name of the game these days. I purchased some damaged (ends split) arrow shafts from the local archery club - 5 off for this model.

An alternative is the local kite suppliers who stock 1-1.5mm wall thickness 6mm diameter graphite tube. You DON'T want the black GRP - it's too weak and too flexible. M6 plastic wing bolts could be used but don't forget the amount of load that they have to support. Because the final fuselage, including 13 oz maximum ballast, weighs 2.25 lbs, (giving 16 oz/sq ft wing loading), a 10G snap turn loads the wing bolts with a 22.4 lbs pulse load. Powered pylon models have claimed 40G turns and that is 90 lbs pulse load but they are usually low wing aircraft so there is no tensile load on their wing bolts. Since Timberleena is a high wing model for ease of launching, I personally prefer steel retainer bolts so it is up to you - but be safe!

Timberleena: The main criteria was that she had a small frontal area, low aspect ratio and a V-tail. The main materials used had to be what I had available at that time to keep the cost down. I had an excess of balsa and arrow shafts in my store that were crying out to be used up. The initial design was started on the scales and the drawing board with one or two problems emerging quite quickly. The wing area had to be large as the weight was rising rapidly! I estimated at least 40ozs. It was at this point that I chose to ignore the aerodynamic wetted surface area (most people do, you know!).

The aerofoil and fuselage sections were to determine the size of the servos used. Small is a word that takes on enormous proportions when it comes to fitting all the necessary bits in their place. The expensive servos were acquired at the rate of one a month. Oh yes! That's another reason why I don't generally use cyano.

The receiver, however, was another problem altogether. How could I get a 5 channel Rx to fit the space available at minimum cost? I finally resolved that by using a single conversion mini-receiver - more on this later.

The batteries needed to cope with the possibility of near stalled servos during the snap turn and be small to boot, so I had to use four off 2/3 sized 500mAh but would recommend at least 600mAh as 700-800mAh is easily drawn if you press on the control surfaces to simulate air pressure.

The wing had to be removable to load the ballast which is held in place by the steel wing bolts. Extra ballast will have to be installed in tubes set in the wing just behind the main spar if greater than 16 oz/sq ft is required. This position does not load the wing bolts but does slow the roll. These ships get really ballistic when the lead goes in, so be warned! I know! I am that novice 'cos she really put a smile on my face! I didn't want to put the elevator servo in the wing as any wing to fuselage movement could upset the trim. That meant the servo had to fit in the fuselage. Upside down was the only way I could see it working in such a small space with the pushrod just sliding along the floor of the fuselage, which would support it nicely in a high-G snap turn. Friction of the graphite pushrod just on the floor of the fuselage isn't a problem.

Fuselage Assembly: Cut the strips of 1/32 ply for the sides and inner skins; also include the separate raised section in front of the wing. Use a good straight edge and clamp the ply at three points along its length to the bench to avoid cutting a bent strip. Glue the spruce longerons balsa infill and inner skins, again clamping whilst curing. During this curing time fret out all the parts required, label and store. Assemble the sides and formers F1-F6 including the tailplane seat complete with its captive nuts. I used cut down plastic wing retainer assemblies..." 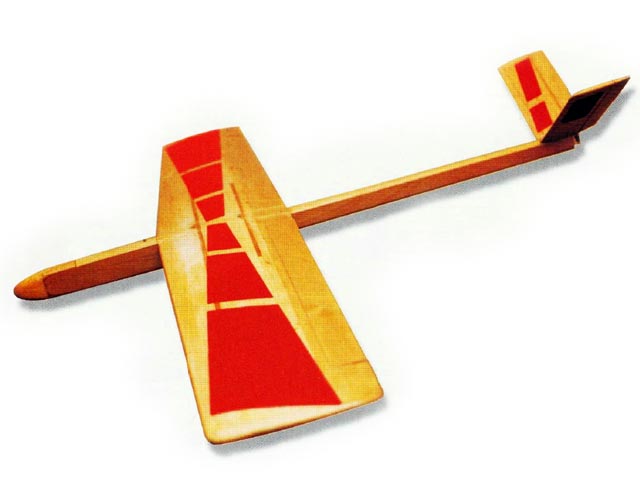