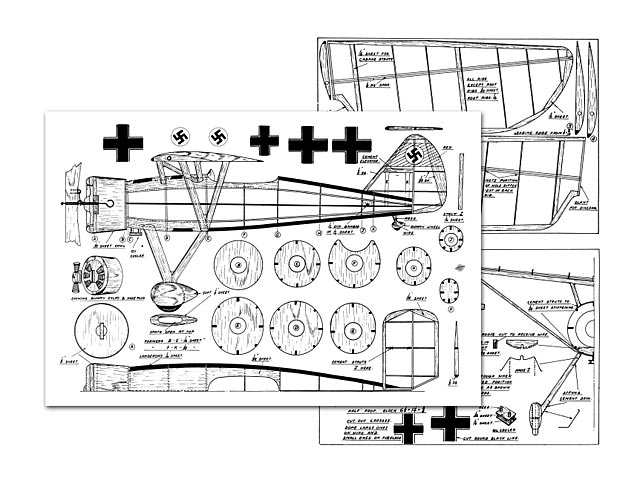 THE new German Air Force is composed of some of the finest planes in the world. Right from the four-motor bombers down to the light trainers, Teutonic thoroughness is depicted.

The Henschel Short Reconnaissance plane is used extensively by the Luftwaffe, as the German Air Force is called. It is built by the Henschel Company at their new plant, situated in a little village called Schonfeld, on the outskirts of Berlin, and is typical of the observation class, as we should term it, the high-wing arrangement offering excellent visibility.

The ship is powered by a BMW Hornet and carries amongst its very complete equipment a two-way radio. It is a two-place job, having a gunner-observer in the back pit.

The German war-time ships have been great favourites with modellers, and if you have been keen on Fokker and Albatross ships, then here is what you have been looking for - a combination of the Black Cross and a modern 'plane, as well as a worthy addition to your collection, so let's get on with the model.

Next comes the 1/32 sheet stiffening for the cabane struts and the landing gear; this will have to be put on in two sections, owing to the curvature of the fuselage; make the joint of the two sections on former D. A better finish can be obtained if the two-place cockpit is cut out after the sheet is cemented in place..." 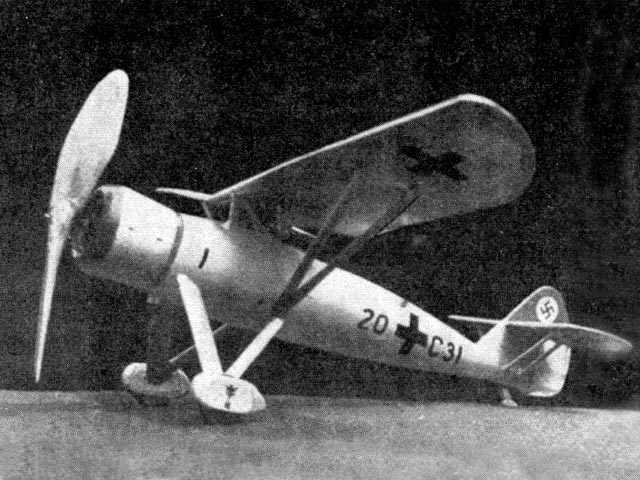 In fact, the real thing was called Henschel Hs 122. Not too many were built, but it lead to the far more successful and larger Hs 126 which had a significant military career. And the Hs 122 definitely was a pretty aircraft.
Martin - 31/10/2021
I did scratch my head as to why the RLM would use 'SR' (Short Reconnaissance) and not 'KA' (Kurze Aufklärung) which means the same thing), so I did a bit of digging around. It's a Hs 122B-o (pre-production deignation) which was only the second aircraft that was made by Henschel) and only served in limited numbers
Daithi - 31/10/2021
What incredible timing that the article admiring the technical prowess of the Luftwaffe would be published in the same month as the start of the Battle of Britain!
TimE - 31/10/2021
Daithi, give the author a break, that was 1940, this was a rare bird (seltener Vogel), Bill Gunston would be 13 at the time so a bit early to accurately label the thing! Count yourself lucky Stan March was able to name this as a Henschel product, as this firm was known for their locomotives, trucks, road building equipment, tanks, pianos both grand and unimposing too, oh, and airplanes as well.
I remember seeing a grader of theirs recently, beautifully preserved, but couldn't stop for photos :-(
Miguel - 31/10/2021
Aha, have changed the scaletype now to Hs 122.
SteveWMD - 01/11/2021
Always remember that air intelligence still had a long way to go in these days. AFAIK the UK was completely caught off guard when the first Focke-Wulf 190 entered service.- In spite of having been test flown in the last months before the outbreak off WW.2 quite visibly and thoroughly from Hamburg-Finkenwerder airport.
Martin - 02/11/2021
Add a comment