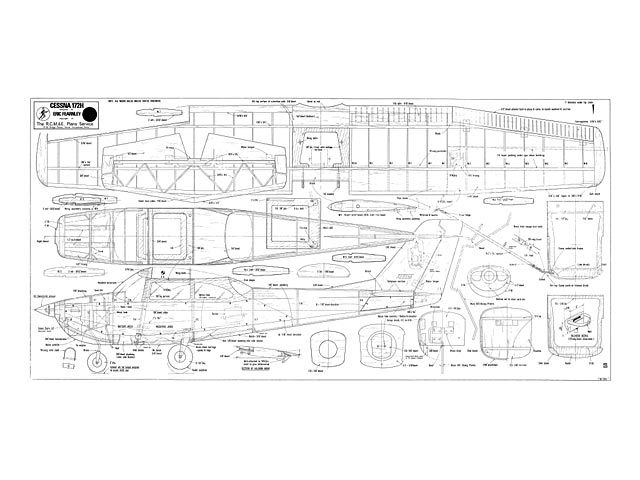 Note this plan is derived from the raw scan as posted on the AF site by aeroastro (see datafile). This version here has been cleaned up a great deal, but there are limits. Not perfect by any means, this may be useful until a really good clear scan comes along.

ONE of the more pleasant tasks I have to perform as a free lance TV news cameraman is to meet the Air Anglia plane on contract to Anglia Television which ferries the urgent news film down to the studios at Norwich. Frequently news items filmed in early afternoon are flown 130 miles down to the studio, processed in colour, and transmitted on the tea time newscast. Few who watch TV realise the terrific effort put into this, particularly by the pilots who have a touch of the early American mail pilots' approach - the film must get through, whatever the weather.

When the weather is really bad, it's a Twin Commanche or Aztec, but more often than not over the last few years it has been 'Victor Zulu', the hard worked Cessna 172H in orange and white livery that lands on a lonely air-strip. I never cease to marvel at the professional pilots who put the plane down almost anywhere. As the soldier said at Kirton Lindsey barracks: he's not going to land HERE is he? But he did.

Of course having such an intimate connection with VVZ, when lucky an air filming job in her as well, I had to get the drawing board out about two years ago and build a model.

Sufficient to say it is still flying, in fact I am right now testing a set of Blue Max radio in her.

One of the most difficult problems to overcome with high wing cabin models is getting enough strength in the cabin structure to carry the wing and suffer the shock of the occasional bad landing. The modern approach is steel tube brazed together. I did not want to use this, preferring a simple structure anyone can manage on the kitchen table. I therefore hit a compromise using plywood parts profusely to form a tee section at the cabin windows. This still allows a reasonably clear cabin interior to be shown, but it is not 'Class of course. Even with plywood, the cabin will break in a bad crash, such as when trying to take off very wet grass at full throttle, and hauling the stick back too far, causing a classic stall, wobble and snap roll, with obvious results. The only satisfaction is that if or when you do this, it all sticks beck again with epoxy glue. After all, something has to go, and like modern car design thinking, it is better to let some part fail, to save the rest.

Two models were built by my son Brian and I as we wanted to operate almost anywhere in any wind strength. we opted for .40 power. I used the Super Tigre, and Stavely Analogue gear initially, now the Blue Max IC. which I find excellent for the fine control which makes a good scale flight, while Brian fitted OS .40 and Gem radio. Many times we attempted formation flights, but the throttle response of the two different engines made it hard work. The Cessnas are extremely clean and with their scale wing section, starting with moderate lift at the centre section, and progressing to fully symmetrical at the tips, accelerate away at a touch of the throttle which makes them ideal for windy conditions.

On one occasion I paced mine against Brian's racer with the same S.T.40 and it was found that the two were not all that different, so obviously Cessnas have done their homework, and the fat fuselage is also very clean. Most aircraft drag comes from the frontal area of the wing depth, it seems, and as the Cessna has a thin wing, tapering to a knife edge at the tips. it is very efficient. In the light of experience I would say that a not too heavy model would fly very scale like on as little as .25 power. One of the difficulties is in fact getting it down with the .40, as the plane continues to fly down to almost idle throttle setting, and the throttle has to be set up very tight on idle to get a power-on landing without float. We often fly on a small grass air-strip 40 feet wide, and landing is none too easy, it being necessary to run the fuel out, or as I do, have the throttle to stop the engine at bottom setting, and kill the power at the last few feet of altitude.

I am now considering whether to carve into the wing to fit flaps, which would have to be fully drooped to produce an air brake effect, rather than increase lift, which we do not want.

Building the Wing: The thin section at the tips demands the use of spruce mainspars. But when covered in nylon the wings are very strong and retain the flexibility to resist damage. Purists will want to sheet up the wings for scale effect. This is fine, but they will then split on a rough landing.

Cut out a full set of ribs from a metal or ply template, including enough to later cut down for the tapered tips. Now count out enough for one outer tapered panel, and sandwich them together with the standard rib at one end, and the tip rib template at the other. Use a razor plane to get them to shape. Repeat for the other side, and mark the tops of each rib. It's easy to get a rib upside down if you do not.

Fasten the mainspar down to the plan as far as the taper point, then block up the tips enough to allow for the taper towards the tips. Ensure that there is no bow in the outer spar which is raised off the plan at the outer panel. Fit the ribs in order, then the top spars, bending the tips down very slightly to meet at the outer ribs. Use white glue, which gives time to manoeuvre the whole structure with tapered strips. blocks and weights until the tips are showing a sort of washout at the tailing edge, caused by the change in section. This all sounds difficult but is not really.

The trailing edge is fitted as far as the ailerons these being shaped from lightweight 1/2 in sheet balsa. If you want perfection, the tailing edge of the ailerons can be cut away and very hard stock glued on to prevent the sharp edge being damaged. The ribs are cut away to allow for the ailerons, and hard 1/4 in sheet added full depth, to take the mylar hinges. Remove from plans when the structure is set, and add tip blocks, and sub spars where the flaps normally go. Hardwood blocks are needed to take the strut fastening.

You will see that the struts are fitted to the wings with double pieces of Mylar hinge material, with a small 1/2 in wood screw and washer. The struts, which are streamlined and fastened to the fuselage by brass slotted plates feeding into a brass socket on the fuselage sides. Thus the struts are semi-working in that they take extra loads imposed on the wings in high G manoeuvres, and yet in a crash will come away with the wing, without tearing anything more than the hinge material, which is easily replaced.

The leading edge of the wing is sheeted up with 1/16 or if you prefer it, 3/32 sanded after fitting, but before this is done it is best to finish the centre section, where the two wings are joined together with a ply plate, and there is also a ply base to take the hold-down nylon bolts at the rear. The aileron rods must now be fitted, with bell-cranks. Cut-outs in the ribs can be made with a sharpened piece of brass tube.

The ailerons must work very freely, but without slop. The aircraft is very sensitive to aileron control, but it has been found dangerous to reduce the amount of control, as near the stall you may need a lot of response. In fact, the ailerons are very outstanding for their smoothness in flight, a point which shows the advantage of the thin tips. Many thick winged 'plank' models are very bad in lateral control, getting all or nothing..." 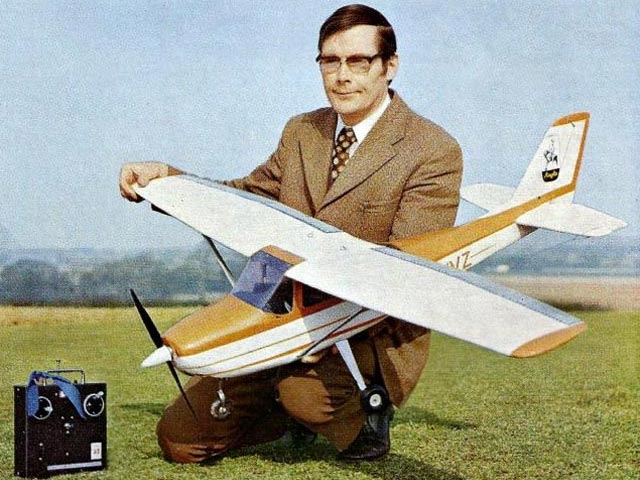