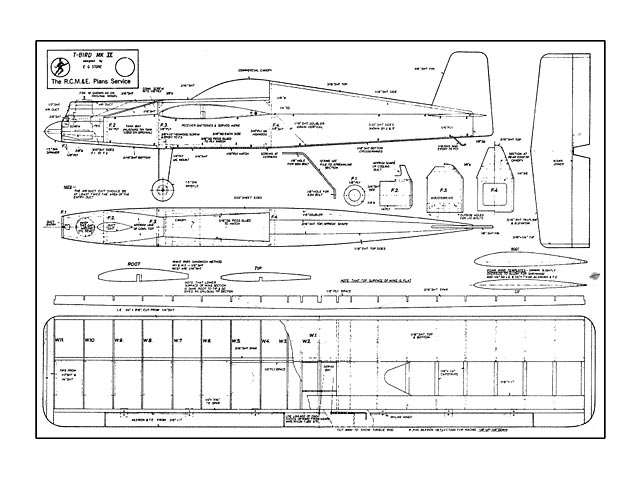 Quote: "A simple Club 20 racer with a proven performance, for the new season. T-Bird, by Cliff Stone.

T-Bird was first drawn up in its Mk 1 form, four weeks before the first Club 20 meeting. Construction therefore had to be simple. The model was completed one week before this first meeting, test flown but found to be full of minor faults, not to mention a very green pilot, with equally as many faults. T-Bird was not therefore flown at this meeting, held at the Nene Valley site, but I attended anyway and got rather wet. Nevertheless, I had a very enjoyable day and learnt a lot from watching and chatting to other pilots, some equally as 'green' as myself.

During the next few months, T-Bird made many flights, both test and racing. In this period it became evident that the model could be fast and had winner potential if consistency could be maintained, but very much depended on pilot, prop, plug and model match. (The typical pylon racing situation in fact). Various combinations were tried on the Fox-19 motor and we eventually arrived at Taylor plugs and a cut down Tornado 8 x 6 prop. (The right prop took a long time to find, so be patient.)

All along, the engine had been mounted in the inverted position, which looks nice, but as most races this year did not require an undercarriage, the engine took rather a hammering on landing. (Created starting problems too). One day the inevitable happened - the engine complete with wood bearers parted company with the rest of the model. This gave me the opportunity to carry out modifications which I had been considering - hence 'T-Bird Two' which is presented here.

After a few more test flights our green pilot (not now quite so green) managed an encouraging third at Avon Cosmetics (amazing how a place in the frame gets your tail up), second at Cranfield, and first at North Berks. and finally a fourth place at Sutton Coldfield due to dirt in the fuel line (there's a moral there somewhere).

You may be wondering what all the foregoing waffle is for. Well, I thought for the new Club 20 pilot, as I was, it would be an encouragement and for anyone contemplating building T-Bird it would give them a little confidence that the model had some development and effort behind it.

Now for the technical details? Since I'm a simple soul, technical may not be the right word, but here's a brief description of why T-Bird looks like it does.

In the original proposal for this class, economy was of major importance. This model fits the bill using two function radio and plain stunt motor which is £2 to £3 less expensive than its R/C version. (I believe I'm right in saying that the Fox 19 is the cheapest motor in its class). The amount of wood in the construction is also relatively small, particularly if a foam wing is used as on the original.

The shape originated around the full size Cassutt racer. This aircraft being rather chunky, I slimmed it down a little don't you think? The wing section at the root has its origin in the Eppler 374 and at the tip, the top part of this section was thinned. These sections were chosen, as I have used this type of section to good effect on slope soarers, where low drag and high speed were required.

The fin has been kept large for accurate and straight flying. Tail surface, well - it does its job after all! An engine cowl is used with cooling and drag in mind, although if you prefer, with minor modifications when constructing the fuselage, the cylinder may be dangled in the air stream. Regarding the cowl, no overheating problems have been experienced to date, although with the weather we have had this summer, liquid cooling for yours truly has been welcome.

Construction: I do not intend to give copious construction notes, as this model is no trainer, though I hasten to add, not difficult to fly,but moreof that anon. Design is very basic, so the wing is of conventional construction. The one point I would emphasise is that no dihedral is used, but when the wing is joined, do it upside down on a flat surface..." 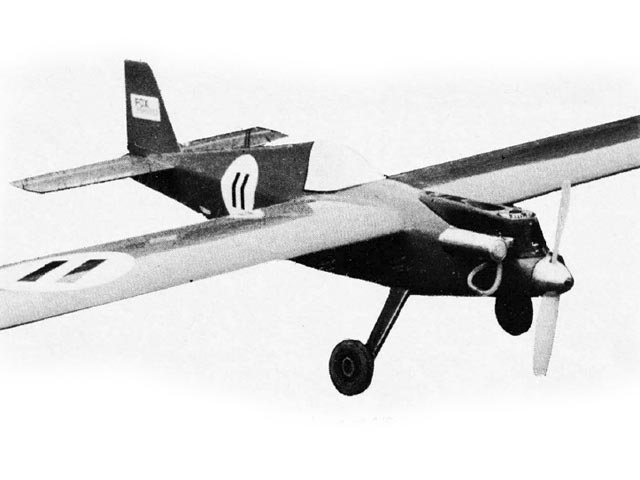