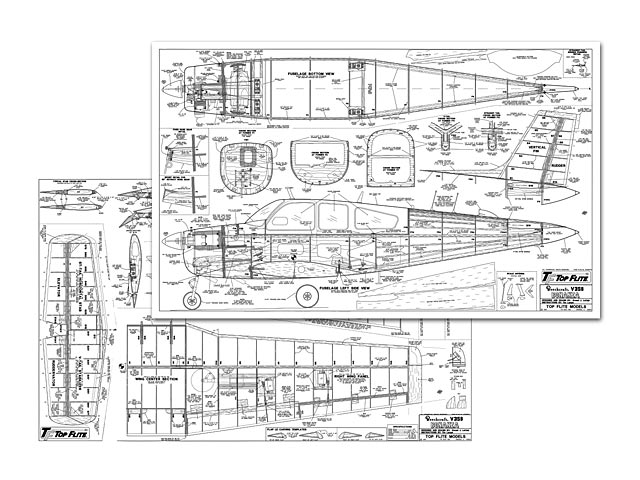 Since this is a scale model with lots of detail, you’ll find it takes a little longer to complete than the sport models you’ve built before. But since this is a Top Flite Gold Edition kit, it isn’t more difficult to build than those sport models. The Top Flite Bonanza uses the same materials and standard construction techniques you’ve already become accustomed to. You won’t have to learn anything new to end up with a first class scale model! Not only that, nearly all of the trim schemes you’ll find on full size Bonanzas are quite simple and should be easy to duplicate with Top Flite MonoKote film!

The Top Flite Beechcraft Bonanza is an excellent Sportsman or Expert Scale subject. Its large size and accurate scale outline afford you the opportunity to go all out with as many extra details as you like. And with the abundance of Bonanzas at airports around the country, finding a full scale plane to model shouldn’t be a problem. The option of building either a V-tail or conventional tail opens up the possibilities even more!

Anyone who has mastered a low wing sport model should be able to fly the Bonanza without difficulty. It handles very much like a full size Bonanza - smooth and predictable.

Because of its 81 in wingspan, the Top Flite Beechcraft Bonanza is eligible for IMAA events. In order to be IMAA legal some of the control components and hardware may need to be replaced to conform to Giant Scale rules even though this model does not require heavy duty hookups.

DECISIONS YOU MUST MAKE

TAIL CONFIGURATION: You may build your Bonanza as a straight tail or a V-tail. Complete instructions are provided for both. The main differences in construction are building the tail surfaces themselves, the way they mount to the fuse, and the turtle deck sheeting. If you wish to utilize the elevators as ruddewators (elevators and rudder) on the V-tail, you will need a computer radio with V-tail mixing or a servo mixer such as the Ace MixMaster (ACEM2510). However, the Bonanza will fly just fine with elevators only and no rudder input. Do not be intimidated by the V-Tail configuration. It flies beautifully and is as easy to handle as the straight tail.

The Bonanza will fly well with any of the recommended engines. The 4-stroke engines and most .75 2-stroke engines will turn a larger prop at lower RPM’s. This is often desirable for scale realism. Many .60 2-stroke engines produce about as much horsepower as the popular .75 or .90 2-stroke engines and will fly the Bonanza well. If you use a .60 2-stroke, a ball bearing, Schnuerle-ported engine is highly recommended. Our prototype Bonanza weighed 13 pounds with all of the options, including flaps, scale cockpit interior and operational lighting, and was flown with a SuperTigre G-75. It turned a Top Flite Power Point 12x8 prop at 9,600 RPM. This engine provided excellent performance and more than enough power, even in gusty winds. Although larger engines can be used to power this model, the extra horsepower is not needed.

The included adjustable engine mount will hold a range of engines from .60 2-stroke through 1.20 4-stroke.

EXHAUST SYSTEM: A Top Flite header and muffler are available that will fit inside your cowl. They are designed for 2-stroke engines mounted horizontally, as used on the model and shown in the instructions. For part numbers see the accessory list on page 6.

RETRACTABLE LANDING GEAR: You may build the Bonanza either with fixed or retractable landing gear. Of course, fixed gear will be much easier to install than retracts; but we provide detailed instructions on retract installation so you should have no trouble. We chose the Robart #BZA80 retracts because they are specially designed for this model. This landing gear is a special adaptation of the Robart #640 mains and the #631 nose gear. Other systems may work as well but it is up to you to make modifications to fit them into the model.

FLAPS: This model was designed to incorporate scale flaps; however,flaps are optional are not necessary for an excellent flying experience. Without flaps, the takeoff roll is longer and the landing speed is faster.

The flaps are not difficult to build, but they do require good craftsmanship to fit well. Flaps add nicely to the model’s flight characteristics and scale appearance while causing no bad effects. Only slight trim correction is needed when they are used with the recommended throws. They are a highly recommended fun option for those who wish to install them..." 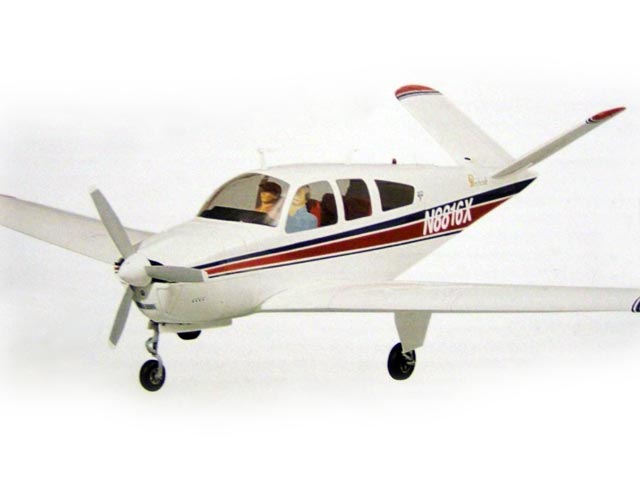