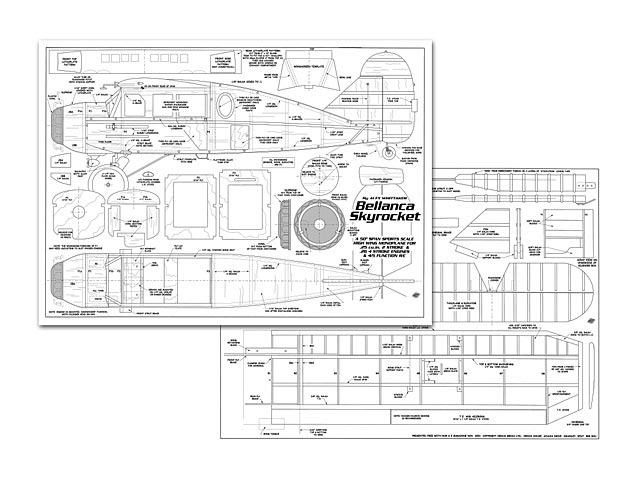 Quote: "Bellanca Skyrocket. Alex Whittaker takes us through the process of designing, building and flying a scratch-built sport-scale model.

Wecome to our sport-scale seminar, a virtual night school course for those who want an easy entry into sport-scale modelling. Over the winter months we'll be following, step-by-step, the process of designing and building a simple but attractive scale model. We'll also discuss a hangarful of tips and wrinkles to illustrate major constructional points on the way, and we'll look at nifty ways of adding scale details with raw material taken from your scrap box and around the home. There'll also be practical ideas on how to conduct research for scale model data using new technology.

Start here and now and you'll have your own sports scale aircraft ready to fly well before the spring. The forthcoming ideas and techniques will be useful for your modelling even if you don't build our featured design.

Our chosen subject is the Bellanca Skyrocket, a rugged Golden Age bush-plane for .25 two-stroke or .26 four-stroke power that's full of character and may be built in a choice of attractive scale variants.

Modern modellers who lead busy lives may not have the time for traditional 'thousand hour' scale models but still want distinctive aircraft. The basic airframe of our Bellanca can be built in a week of evenings (we've timed it!), getting you quickly to the fascinating bit of adding scale detail. The apparently complex engine cowl is extremely simple and costs just 69p, and the wood for the airframe costs less than £15. We'll use basic, readily available commercial tanks and wheels, and all the other scale details will be made using simple 'kitchen-table' techniques.

Sport-Scale definition: In the noble tradition of Gordon Whitehead and David Boddington, sport-scale models are scale models that are optimised for normal club fields and everyday club pilots. They aren't top competition hangar queens, but eminently practical flying models that capture the spirit of the prototype.

The detail incorporated in sport-scale is carefully designed to take the rough and tumble of normal everyday flying. The clever bit is choosing just enough detail to give the impression of the real aircraft without turning the model into the 'thousand hour' masterpiece that you may be too intimidated to fly. So, choosing which details to add, or miss out, and which details to modify for practical flyability becomes most important when choosing a prototype.

Choosing the Prototype: As a bog-standard sports modeller myself, I reckon most beginners to sport-scale want a model that's easy to put together, doesn't take too long to build, and takes normal mass-market modelling gear. Since scale detail will inevitably add some extra weight to the airframe we need a basic design that isn't vicious to fly. Bearing these thoughts in mind our choice for a beginner wouldn't include biplanes, mainly because two wings take longer to build than one, and many modellers don't like fussing with rigging.

Similarly, low wing monoplanes are lovely but probably not for the scale beginner. So, our chosen model for this column is a stable, high wing monoplane with a simple fuselage and cantilever wing; this means that the scale struts, although working, don't need to be!

Research: Most of us choose a prototype because we've seen one at a flying field and like it, or we've seen a picture in a book and it appealed to us. Sometimes we've spotted someone else's in a magazine and must have one. The problem then is scale research. As a minimum we'll need three sorts of data:

1. A reasonably accurate three-view drawing of the prototype.
2. As many photos as we can get our hands on.
3. Information on colour schemes.

For many of the tried and tested prototypes that get modelled over and over again there are museums to visit, books to buy and commercial plans to seek out. We can even buy dedicated publications that deal with a single aircraft, say, the Fokker Eindekker or Spitfire. In the past I've also used David Boddington's photo packs with great success, most notably with my Blackburn 1912 monoplane. However, in our case with the seldom-modelled Bellanca, there were no such sources readily available. In fact, I could only find a few scraps here and there in my own scale library.

Luckily I have friends who don't mind me cadging their aircraft books. Thanks particularly to John (Jack) Cooper for the superb Robertson book (see Bibliography) and Eddie Jones for searching me out a copy of Flypast Magazine (August 1983) with a Canadian National Museum Bellanca on the cover. Even so, I had to try a novel route to expand my scale information - the Internet!

Now, dear reader, if you don't have access yourself, it's time to snuggle up to a mate with an internet-equipped computer.

Internet Info: Looking for some Bellanca data all I did was log onto the internet using the Microsoft Internet Explorer browser program, and from there went directly to: www.google.com. Google is a 'search engine'. You type in what you are looking for ('Bellanca Skyrocket') and it searches all the hedgerows and ditches of the internet until it finds what you've told it.

In this case it listed pages of websites that had the magic words 'Bellanca Skyrocket' contained in them. Many of these also had very useful black and white photographs, and a few museum websites had modern colour pictures. You can save these pictures on your hard disk, or you can print them out there and then.

In all I was able to print about twenty pictures of various marques of Bellanca, so I could see which 'extras' the bush pilots had fitted over the years. I could check such things as landing lights, doors and windows, airline markings, and skids. For example, I found that the Canadian Royal Mail used pillar-box red Bellancas, complete with the Royal Device, for mail routes in Alaska. I even found a variant of the Bellanca with no side windows that was built for hauling freight, flew the Pacific Ocean(!) and was fitted with a Packard diesel engine..." 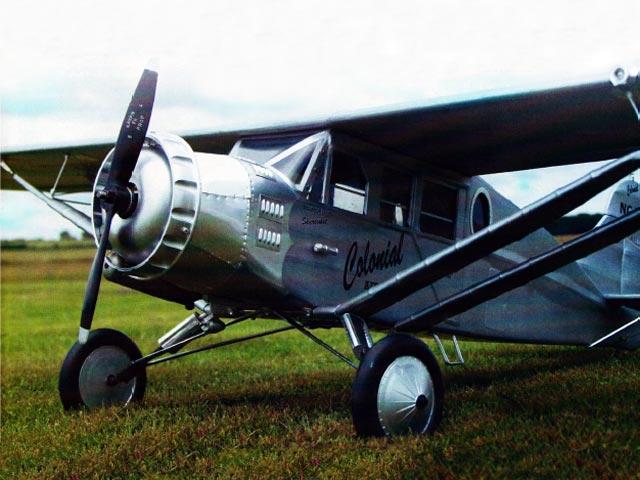