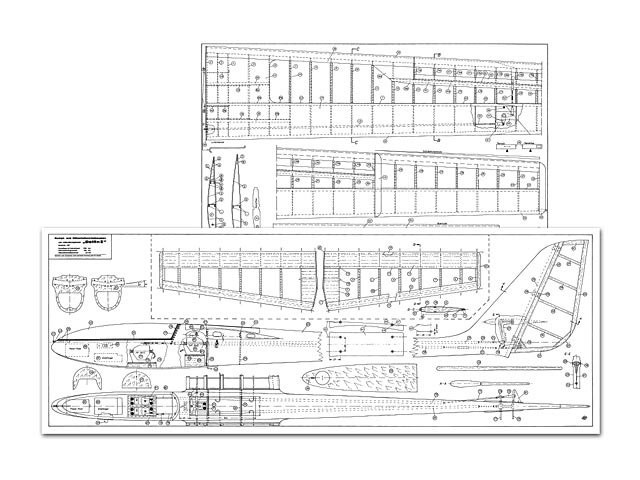 Quote: "The original Robbe Delfin (oz13375) glider was first released in 1970. In 1976 the fuselage was revised, this was called Delfin II. The numbering has nothing to do with the full-size original's numbering! The wing plan fits both of them. Building instructions and catalogue pictures are German only."

Quote (using Google translate, from instructions): "General description: The Robbe-Delfin II is a fully aerobatic RC glider model with pendulum rudder. It is very elegant and has been faithfully recreated the well-known Yugoslav high-performance glider of the same name. The model is not only characterized by its excellent flight characteristics, it also shows an elegant flight pattern. This is not least due to the pleasing lines of the finished polyester fuselage with molded rudder unit.

The Robbe-Delfin II can be used universally. Even less experienced model pilots will be able to use it successfully as an introduction to model gliding.

In thermals and on slopes, the Delf in II will inspire you with its performance and appearance.

Please read the entire assembly instructions carefully before starting construction. In connection with the parts and materials list as well as the construction plan, get a precise overview of the type and purpose of the various components and of the construction process itself before you start work.

The construction plan for the fuselage, rudder and horizontal stabilizer with side and top view as well as cross-sections should be used for assembly. To protect the plan from being damaged by glue, an overlay made of thin, transparent polyethylene film must be used. If this is not available as a larger section, already separated packaging bags are sufficient.

There is a photo sheet in the middle of this brochure. With the individual illustrations, we give you further visual information about the respective status of the assembly.

The construction plan enclosed with the assembly box is drawn on a 1:1 scale and is used as a construction base for the elevator and vertical stabilizer. The numbering of the components corresponds to the order of assembly.

The material list is worked out as a table. It specifies the parts list number for which the boards, strips and cuts, etc. contained in the kit are used.

Note the photo [main pic] here, with thanks to pikpak, shows a MkII version with additional engine power pod.

Quote: "It is a MK II, according to the canopy. The external difference is not so great. The MK I (just 'Delfin' w/o anything else) had the canopy cut-out almost to the TE, which obviously weakened the fuselage too much. Instead there was a hole with (quite flimsy) ABS cover so that the aileron clevises could be fitted. Otherwise there are only small differences, the wings are unchanged AFAIK." 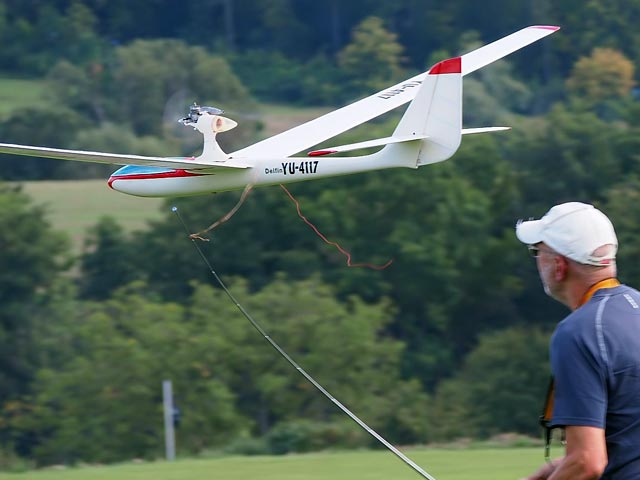