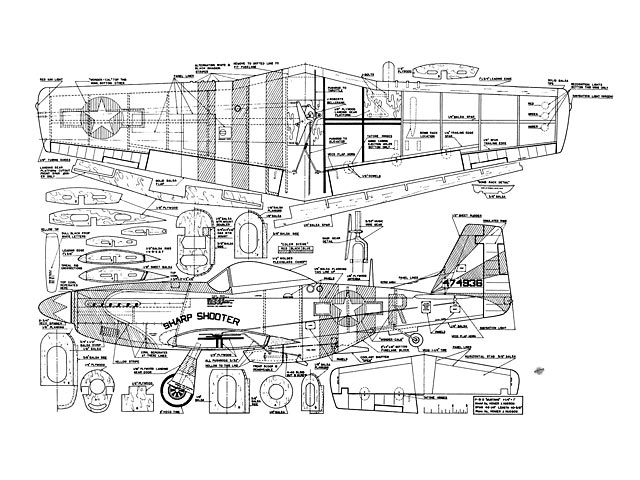 Quote: "Control line scale's most exciting machine duplicates the excitement and beauty of the full scale aircraft. Best fighter plane of World War II, it has been developed in model form many times but never with such complete attention to details, finish and flight capabilities. P-51D Sharp Shooter, By Homer Hudson.

The United States' principal strategic fighter during the Second World War, the Mustang, has been called by many the greatest prop driven airplane ever built. The prototype was pushed out of the assembly shed in 117 days. Spanning 37 feet and weighing a. maximum of 11,600 pounds, the Mustang flew at speeds of 425 miles per hour and at altitudes of over 40,000 feet.

One of the greatest honors accorded the Mustang was its rating in 1944 by the Truman Senate War Investigating Committee as the most aerodynamically perfect pursuit plane in existence. In Korea, P-51's, brought out of the mothballs, provided air support for ground troops. A tribute to the ageless spirited Mustang are its victories in damaging and dispersing enemy jets. Its was the only prop driven fighter from the Second World War to do battle with the Russian-built Mig-15 over Korea. The P-51D, the most widely produced of the series, is the basis of the model.

In view of the rapidly approaching 1965 Nationals, another new model was in order. After a preview of some of my buddies' expected entries, namely Ted Prasol's Lil Tonie, Florian Piorkowski's Comanche, and Eddie Tepper's Ryan, (see July, 1966 edition of MAN), I had little doubt that this competition, along with the best from the rest of the country, needed something not less than spectacular.

Since this was my first Nationals, I needed a plane that was familiar to me, whose scale information could easily be obtained. After a couple of letters to North Americal Aviation and the Air Force Museum, I decided upon the P-51D Mustang, the 'Sharp Shooter' which is on permanent display at the Air Force Museum.

After several lengthy telephone calls to the home of Teddy Prasol, I was able to convince myself that the model plane should be finished in natural aluminum as the prototype. With added goodies such as machine guns with ammo, removable panels, lights, flaps, operating joystick, throttle control, and operating oil cooler and radiator shutter doors, quite a few additional points were to be realized. I felt that here was a model that almost anyone would be proud to own. Later, I realized that I had made the right choice since I came in third in the 1965 Nationals.

If you choose to finish your model in natural aluminum, keep it as light as possible. My model took almost three pounds of lead to get the nose down, bringing the all-up weight to 8-1/2 pounds which gave the plane a tremendous wing load. My ship has flown well at this weight but I'm sure that its performance would be increased if it weighed several pounds less. However, I am equally as sure that a painted finish cannot equal the real thing, so I leave the choice to you.

Construction, to me, always starts with a detailed study of the subject and plans. Review all the information you can get about the plane. Invest in a good plastic model of it. Although this is not necessary, it will help to give you a clearer idea of what you are trying to reproduce. Selection of wood is important. I used Sig Contest Balsa.

The fuselage sides are cut from 3/8 balsa. Glue the motor mounts doublers to the motor mounts. While they are drying, cut all the fuselage formers and glue A to A-1. Assemble formers A through C and glue these in place holding them together with rubber bands or masking take. Then glue and join the rear of the fuselage together in the same manner. Glue the 3/4 x 1/2 balsa strips to the inside directly behind the A-1 and running along the cowl to the separation line to former B. This will allow you to later carve the fuselage to the proper nose shape. Now glue the remaining fuselage formers in place.

Cut and notch the wing main spar, ribs, trailing edge spars and remaining wing parts, along with the landing edge. Wing spar plywood doublers are glued to the main wing spar using a white glue. C-Clamp together and allow to dry. All ribs are slipped into place and glued with white glue. This glue is used because it takes longer to dry and you will need the time to assemble the leading and trailing edge parts before the glue settles. Leading edge and trailing edges are now glued and after carefully aligning these, pin and set aside to dry.

Bellcrank platform and landing gear platforms are now made ready by bolting gear and bellcrank to them..." 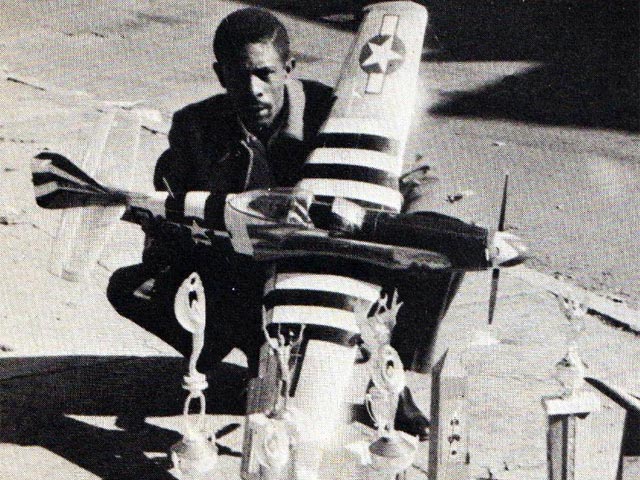