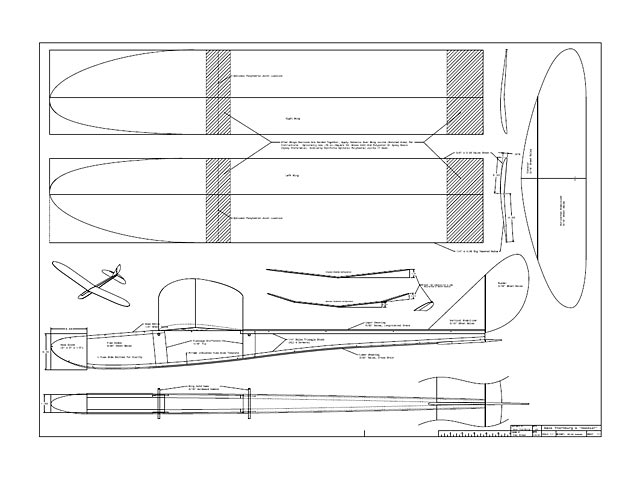 Note the original Doodler kit was released in 1972, and did not include a plan, at all. This here is a modern redrawn plan in vector format, that re-creates the design as closely as possible.

Quote: "At the insistence of a friend on RCGroups, I am submitting plans for this somewhat obscure glider that Dave Thornburg (Bird Of Time, Honker, etc.) kitted in 1972 as part of his Southwestern Sailplanes product line, at the whopping sales price of $10. It was unique, as it did not include any plans, only a box of (very good) sheet balsa (4 of which were pre-bonded as the beginnings of a left and right hand Jedelsky wing, again like the Honker), that had shapes pre-drawn from templates on them - NO die-cutting. An instruction manual of 7 xeroxed pages with all the pertinent instructions for building the model, along with many suggestions for modification rounded out the package. The intent of this style of kit was to encourage experimentation and design with the raw materials supplied to put your mark on the finished product. I believe it was kitted from 1972 to 1976, which may explain why there are not many around.

It seemed a shame that this interesting footnote in R/C Soaring history would likely disappear without a trace, especially when so many people fondly remembered the model. It took a lot of digging, re-connecting with Dave for the instructions (we hadn't spoken in 40 years), and the fortuitous discovery of a fellow who had a partially completed kit in his attic, which he was willing to dig out and photograph with a machinist's scale to bring this model back to life in a reasonably accurate fashion. Attached is a plan I created, and a copy of Dave's instruction manual. In the research phase I collected copies of ads from magazines, an RCM kit review, and many RCM, and Model Builder articles that documented the basic development of the design; I have attached these also. Kind regards,"

Note for more details and background on Stan's work on this research project, see his RCGroups thread at: https://www.rcgroups.com/forums/showthread.php?3987363

Quote: "RCM Test Report: Southwestern Sailplane's Doodler. A $10 Sailplane Kit That Can Be Ready To Fly In Three Hours?

What do you do with a Doodler? As a matter of fact, how do you describe a sailplane kit that contains virtually no prefabrication (as we are accustomed to it) yet can be built in approximately 3 hours, ready to fly? Also, how can you retain any degree of credibility In explaining a $10.00 sailplane kit where the retail price of the balsa wood is more than the total price of the kit?

By the same token, how can you explain or describe an "ugly" sailplane that is beautiful in concept and, from the same kit can retain either its basic configuration or can look like a Schweizer, can have a swept back wing, a double tapered wing or a Thermic 100, instant nostalgia 1930 style wing, a high-aspect ratio wing; can be modified to have a pod and boom fuselage to make a semi-scale Baby Albatross, can be modified to take a T-tail, or can be flown on single channel with a V-tail, can be made into a low wing sport sailplane or can have a turtle deck added to make it look like a semi-scale Fournier, or can be completely changed around to make a flight-tested Canard? Or, if you prefer, and if its too cold for thermals, you can simply saw the nose off and screw on a .049 engine for power assisted soaring. All of these modifications are included in the 7 page instruction manual that accompanies the Doodler kit from Southwestern Sailplanes, 917 Princeton, SE Albuquerque, New Mexico 87106.

If we have thoroughly confused you by this time, we'll try to explain the Doodler to you, truly one of today's biggest kit values. The Doodler was designed by Dave Thornburg who wrote an article several months ago for RBM entitled 'Slope Soaring in the Colorado Rockies.' In that article, Dave was flying an all-balsa sailplane - the Clod Nine (oz12261) - which he hurriedly constructed to take along with him on the motorcycle trip through the Rockies. It had to be a quick-building, all-balsa, sailplane that could be easily transported. This basic design eventually resulted in the Doodler kit, which Dave is currently kitting.

The design is quite simple in concept in that it contains a fuselage, wing, and empennage. But here, all similarity ends! This 72 inch span all-balsa sailplane has up to 500 square inches of wing area and is designed for 1 to 3 channel digital systems, single channel, or free flight! And, believe it or not, it flies quite well in all of those modes!

The kit contains two 3-foot pre-cambered sheet balsa wing panels that need only be sanded, butt glued together, and covered with two pieces of Celastic provided in the kit. Selected sheet balsa has been picked for the fuselage and tail; the nose block is included; all pushrod material; control horns; adjustable hook up links; hinges and everything but the glue and the radio is included in order to get you airborne in 3.6 hours.

When we mentioned that there was little or no prefabrication, as we are accustomed to the word, what we meant is that the simple box-like fuselage is drawn out with ball point pen (quite accurately, we might mention) on the sheet balsa fuselage sides as is the nose block on the 3 x 3 inch balsa block. All that is required is 6 cuts with your Dremel Jig Saw, or a hand saw, to completely cut out the stabilizer, elevator, vertical fin, rudder, fuselage sides, and nose block.

First, the wings are rough sanded and butt glued together with 5-minute epoxy, blocking up the proper dihedral under each wing tip. Then, a panel of Celastic is soaked in dope thinner and applied to the top center section of the wing. The wing is then turned over and another piece of Celastic applied to the bottom of the under-cambered sheet balsa wings. The wing is now ready for final sanding.

The fuselage is assembled by cutting out the two fuselage sides, gluing the two plywood stiffeners to each side as well as the triangular stock top and bottom longerons. The two fuselage sides are then glued to the nose block and the tail is spot glued together.

The fuselage contains no bulkheads and is quite thin for a minimal amount of frontal drag. Next the fuselage is turned over and the flat rear section of the fuselage is glued to a piece of 3/32 sheet balsa provided in the kit. When this has dried, the excess top sheet is trimmed off and the bottom of the fuselage is planked with 3/32 balsa with the grain running crosswise for maximum strength..." 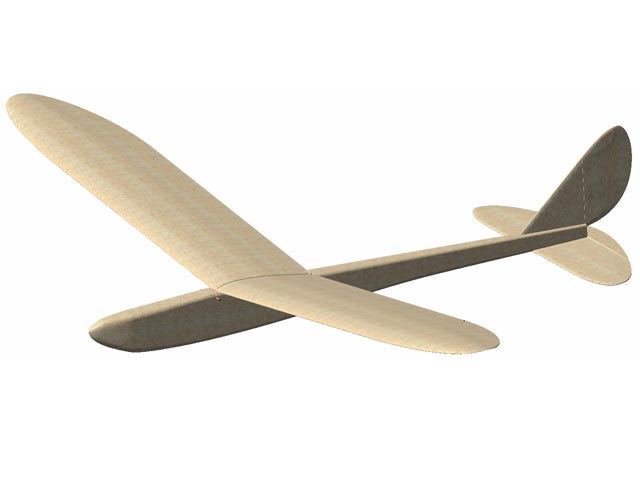