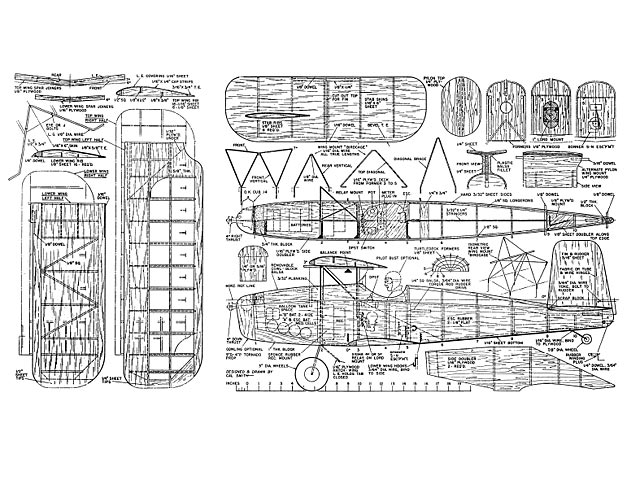 Quote: "Fast, maneuverable bipe for stunt work will bring you plenty of compliments and many hours of flying fun. Wonderwings by S Calhoun Smith.

Biplanes have long been the step-child of free flight, and we haven't heard of any rash of them breaking out in R/C, either. Here's an attempt to change all that!

It was felt that the biplane configuration should be well suited to R/C flying for a number of reasons. The biplane has been a top-notch stunt airplane in full-scale aerobatics, so obviously the type would seem well suited to R/C stunting. The biplane packs a lot of wing area into a -small space, making transporting easier. Biplane flight characteristics are well suited to R/C flying, notably stall recovery is much smoother than monoplane, and the extra drag slows speed a bit so that the model can be kept in close for maneuvering. A short-coupled model such as this can turn on a dime, and has a snappy roll tendency.

It would seem that all these factors might add up to a pretty wild flying machine, but experience showed just the opposite. When properly adjusted - repeat - when properly adjusted this ship left little to be desired in the rudder-only flying department and is a veteran of months of Sunday afternoon flying sessions.

Wonderwings has taken its share of bumps and cart-wheels too. Its structure was designed with a view to withstanding all the hard knocks test flights could give, so that something would be left for flying when adjustment and trimming were completed.

Liberal use of plywood and Weldwood glue is the answer for crash resistance and as a result this ship is rugged - no foolin'.

Making the biplane setup fly well is controlled by the wing-tail incidence and proper CG location. Free-flight maestro Frank Ehling showed us the proper set-up for this ship, so if the redesign bug hits you read just one more sentence, please. Don't change the incidence angles of wings and tail from those shown on the plans!

Model specifications are span 44 in, length 34 in, total wing area 480 square inches, weight 46 oz, wing loading is 9.5 oz/ sq in, and power loading is 328 oz/cu in with the .14 engine. The ship has been flown with a throttle-down Arden .19 and results were frantic; to say the least. An .09 engine would not be quite enough power at present weight.

Plans differ from the original model a bit, but the changes are for your benefit and will not affect flying. The nose was lengthened 1/2 in to move battery weight forward a bit for proper CG position, 1-1/2 oz of lead was carried in nose originally. Wheels are bigger, 3 in dia instead of 2-1/2 in. Fuselage width increased from 3 to 3-1/2 in to allow more payload room.

R/C flying has been done with home-built RK61 two-tube receiver on 27-1/4 mc. The sponge-rubber receiver mount is standard practice and is fine for crash resistance. Batteries in forward compartment are packed tightly in sponge rubber to prevent their flying around in a crash. We prefer the separate relay mounting to subdivide weight of components and the Lord mount takes care of vibration problems. Both ED Mk III and Bonner escapements have been used, and rubber drive is popular torque rod linkage. 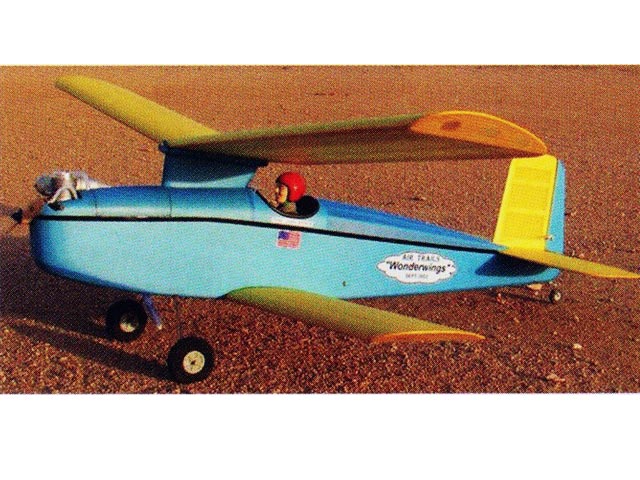