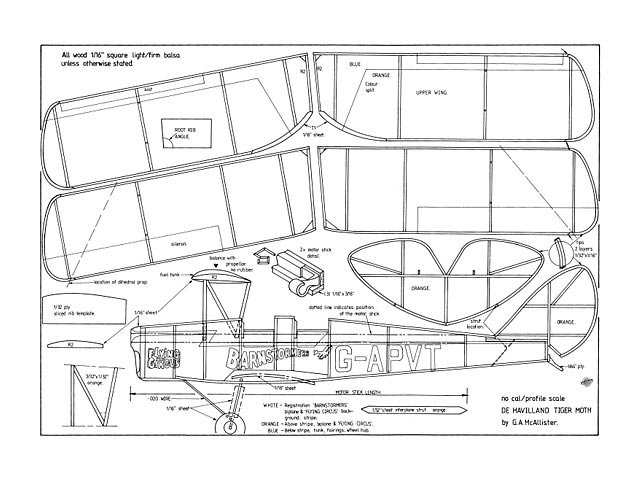 The afternoon was grey, heavy cloud, drizzle. Netherthorpe, a true farmers field aero club, had picked a bad day for its airshow. My brother and I dodged in and out of our father's car, avoiding the heavy showers, not wanting to miss anything that moved. Joy rides were cancelled, sky diving too, you wouldn't have needed a chute to jump from cloudbase. I recall a pylon race, a sedate affair, around the field with a variety of light craft and enormously handicapped "dutch racer" (according to the programme) relentlessly "having 'em in".

I have a murky black and white photographs to pro-ve it. Then, "The Barnstormers" seemingly bringing their awn sunshine, flashing on orange and blue wings. Their classic Tiggies swooping, rolling, looping, cavorting on the very tips of grass and those long low side slip passes, wing tip low and left aileron, bootful of right rudder to hold a straight line, memory etching stuff.

Many a jet-filled RAF show has faded with time, but that rainy day at Netherthorpe shines on.

This No-Cal Tiger Moth oozes character that belies its simple structure, for simple and quick it is. Although with the Barnstormers colour scheme the preparation of the covering took probably twice as long as building the structure. But Tiger Moths abound in as simple or complex a scheme as you wish, take your pick.

A word about laminations: The elegant curves of the Tiger Moth's extremeties are best represented with laminations. Don't be put off as I used to be, they're easy.

Taking the fin first, place a piece of hard 1/16 balsa under the plan and prick around the inside edge of the outline. Join these marks, extending at each end with a straight line for approximately one inch. Cut out this shape and smooth with a sanding stick to keep the edge square. Position the template on the plan to mark the ends of the required shape. Now wax the edge of the template, simple rub with a candle.

Also make one template for half the tailplane and two identical templates for the wing tips.

Cut a number of 1/16 strips from flexible 1/32 sheet 8 inch long. Submerge them in water for a few minutes, while you cut lots of 1/2 in wide strips of masking tape. Pat any excess water from the balsa strips, take one and tape it to the fin template, well away from the end mark. If right handed, place your left index finger tip on the strip, and push away from the taped end with firm pressure while feeding the template between your right thumb and index finger, and your left thumb and forefinger. Work slowly around the curve, especially the sharp tip. When you reach the other end, tape the strip to the template.

Now go around and tape the two strips every half inch, closer on the sharp curves, onto the template Gently squeeze the strips sideways to make sure that they are aligned. Be careful not to crush the damp wood with the tape.

Repeat with half the tailplane and two wing tips, then leave 24 hours to dry in a warm place. Carefully remove all the tapes and release the templates. If any of the strips crack, start again don't attempt any repairs. Make one more tailplane half and two more wing tips, you won't believe how much easier they make building the structures later..."

Quote: "Hello, this is a model which I designed in 1992. It was published in a locally produced (Sheffield, England) magazine called Flying Model Designer & Constructor. I've scanned the article and the free plan which came with the magazine. Hopefully the pdf files will come through correctly. The wingspan is 15 in. Thank you, Graham McAllister" 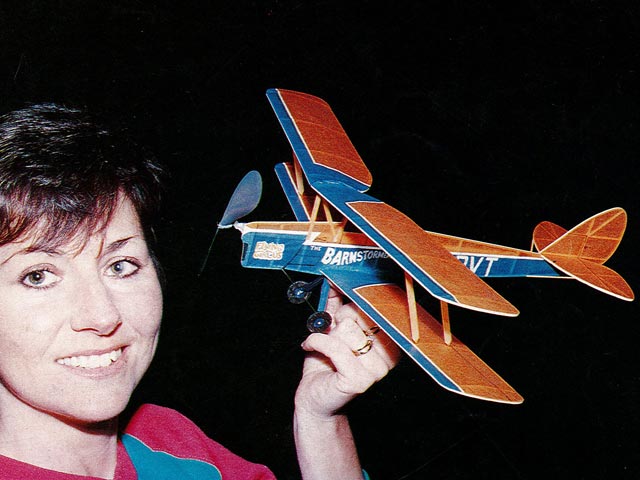