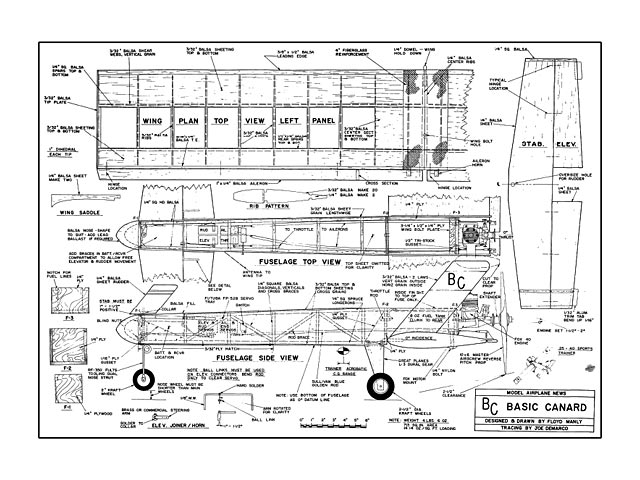 Quote: "Why a basic canard? The answer is simple! Because a backward-flying airplane is fascinating, particularly from an airshow standpoint.

The design of the Basic Canard came to me one day when my 4-year-old grandson Derek needed a babysitter. Since I was volunteered, I needed something to entertain a very energetic and highly intelligent little rascal. We got a dime-store balsa glider and used up 10 or 15 minutes putting it together, balancing it, and attempting to explain why it flies. The next 30 to 45 minutes we tried to wear off some of his energy by chucking it all over the backyard. Then for some reason Derek tried throwing the glider tail first. Naturally it didn't fly worth a darn and he wanted to know why! Why? Because it's not designed to fly backward, but maybe we can fix it so it will. We moved the clip-on weight to about 1/3 of the way behind the wing and tried it. It flew, but with a yaw that fell into a flat spin (try and explain yaw to a 4-year-old), so we pulled the vertical fin off and glued two new ones out on the tip of each wing. It flew beautifully!

When Derek's mother came to pick him up, he fascinated her with the backward airplane that he and Gramps had 'zigned.' Her casual question of whether I was going to make an R/ C model of it was answered after only a moment's pause. Sure, why not! This lead to the BC.

I think now it would have been easier to have put the motor up front, but for some reason I first drew it in as a pusher, so that's what it remained. The only rationale I had was that if the wing was on backward, the motor should be backward also. I built positive incidence into the carnard surface because the backward glider had it. I set the wing incidence at 0 degrees, figuring that it would stop flying before the canard. I estimated the size of the wing fins to be approximately the same are as ones I would have put on the tail, and approximated the CG as the same as the glider. I set the motor at 1 degree up (prop down to the rear), thinking that since the center of thrust was higher than the center of mass, it would tend to hold the nose down under power. How wrong I was!

The last assumption I made in the design was that a small rudder would be more effective on the nose than two would be out on the vertical fins. It would be a lot easier to build and it would put the weight where I needed it. Because this was to be a test-bed aircraft, I just stuck it on top of the extended nose wheel strut. It looked goofy up there and would it work? Would anything I had assumed work? Would it fly?

Well, you're reading this article and you can see the accompanying plans, so you know that it did work. Read on to the final flights and you'll be only two weeks away from flying your own Basic Canard.

Why am I suggesting a canard as a basic trainer? Because, in spite of what people on the bus say, they're stable, easy to fly, and more forgiving of all a beginner's mistakes than any design currently available. Why then aren't all basic trainers canards? Because they're different, as different as front-wheel cars were 10 years ago. In a very short time, as manufacturers rediscover the canard, you'll start seeing more and more new models at the field.

If from no other viewpoint than the cost factor of learning to fly R/C, a canard as a trainer makes sense. Broken props are almost non-existent and broken engines never happen. The cost of a canard is no more than a standard model and there isn't any exotic equipment that makes them different, just the arrangement of the parts. It's entirely possible to take, say an Ugly Stick (oz5175) and turn it into a canard with just the parts in the box. This is almost what I did with the BC. I made no attempts to develop anything but a very basic trainer: no frills, no fancy shape, no criteria, except to make it fly. Well, fly it does and beautifully too, exceeding my expectations.

I questioned the use of a symmetrical wing, but by using the TLAR theory of design aiming at a mid-range performance aircraft, I was pleasantly surprised by the low-speed stability I stumbled on. The BC handles so well at all speeds that I haven't considered a flat bottom wing any further.

I want to caution beginners that a .40 will haul the BC around faster than any other trainer, and she'll be out of sight or shape in two blinks. I strongly advise a .25 for power to begin with. If you must use a .40, a 9x6 or 9x5 prop would be plenty. Unfortunately, to my knowledge pusher props are only available in 10x6, so it's up to the pilot to use the same discretion he would with any other trainer. Keep the power down!

Construction: Mike, my cohort and strictest critic, helped me with this project and we tried to keep the BC as simple as possible. The plans show where to glass, brace or gusset, and if you study them you'll have no trouble. The following hints and sequences will make assembly go much more smoothly.

For the wing, cut all ribs and mark their tops with a felt-tip pen. They're supposed to be symmetrical, but home-cut ribs don't always end up exactly that way.

Build the left wing over the plans, then build the right panel over the same layout by putting the pen marks down. Finish the wing by joining the halves, glassing the center section, and adding the ailerons. Hold off installing the dowel and drilling the bolt hole until you have the fuselage ready.

When you have the fuselage complete to the point of sheeting its bottom, place the wing in the saddle and check its alignments of incidence and skew. Hold it firmly in place, then drill through the hole in former F-2 into the wing leading edge..." 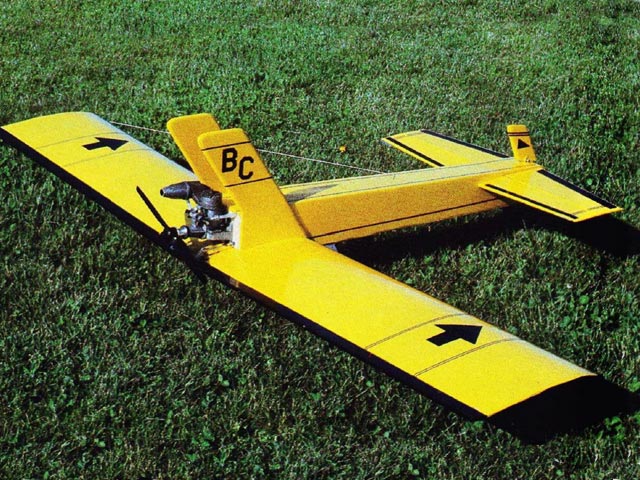