Quote: "Just as the original Spirit of St Louis was rushed to completion in a crash program against time, so was the 'Peanut of St Louis', in order that modelers would have plans and documentation necessary to enter Model Builder's special event in this year's Parcel Post Proxy Peanut contest!

Even those only dimly aware of aviation history know the names Lindbergh and Spirit of St Louis. To air enthusiasts the names are inspirational and create visions of the best in human ingenuity, resourcefulness, and daring. May 20, 1977 will mark the 50th Anniversary of Lindbergh's famed New York to Paris flight, and the Golden Anniversary of the event will be celebrated in many ways. Since 'Lucky Lindy' and the Spirit did so much to stimulate aviation awareness and since they no doubt contributed to the boom of model airplane building in the late 1920's and early 1930's, it is entirely appropriate that a tribute be paid by the model builders of today. Hence, Model Builder's Third Annual International Parcel Post Proxy Peanut Scale Contest will feature a special Spirit of St Louis event in which peanut-sized Spirits will soar in tribute to their revered prototype and armchair Lindberghs will dream and plan their own conquest of lime and space.

The Spirit is a high-wing monoplane and, without seeing scale views of it, you might think it is a natural free flight subject but, after examining scale views, you will realize that the Spirit is a subject to be reckoned with - particularly if you intend to attempt creation of a reasonable facsimile. The wing has a Clark ‘Y’ airfoil, but otherwise it is proportionally huge (being substantially greater than the Ryan M-1 and M-2 monoplanes after which the Spirit was patterned) and there is no dihedral (imparting a characteristic droopy look and almost guaranteeing side-slip problems).

By comparison with the wing, the fuselage is dainty and short, short, short! A reasonably long nose gives some encouragement to the would-be free flight trimmer, but the microscopic tail surfaces are a flying scale buff's nightmare. Then there is the landing gear. Built to scale, it means ROG's will be impossible for a rubber powered ship and also that every landing will be a replay of the tumblin' tumble weed! In short, friends, the Spirit of St Louis is a challenging, possibly tormenting, subject.

In the hopes of making your Yuletide a bit brighter, I have concocted a set of peanut plans for the Spirit showing both the true lines and suggested deviations for improving flight. A set of proof of scale three-views also accompanies the plan, so you will have all the documentation required when you mail your version of the Spirit to the Proxy Peanut Contest next spring.

Construction is conventional, with an emphasis on weight saving. The model is built almost entirely of 1/20 x 1/32 medium, straight grained balsa.

Fuselage construction begins with the building of the sides from 1/20 square strip. Once these are completed, they should be joined by cross pieces directly over the plan. Figuring that nose weight would be needed and also, taking into account the rather abrupt change from a rectangular section at the wing to a circular section at the nose, I elected to construct the nose or my model from block balsa which was hollowed to the approximate lines shown in the plan by the use of Dremel tool, after the external surface had been carved and sanded to shape.

Experience has taught me to avoid balsa for rear motor mount peg supports and these, on my model, are made from 1/32 plywood cut wide enough to comfortably admit a short length of 1/l6 diameter aluminum tubing, which serves as my rear motor peg..."

Quote: "Just what we need, yet another Spirit of St. Louis/Ryan NYP; this one's a Peanut scale plan by Dennis Norman from the December, 1976 issue of Model Builder. The following changes have been made to the original: a complete re-draw of the wing with equalized rib spacing, the LE, TE and spar aligned to the ribs, the center section spaced to the fuselage width, the overall span corrected and the horizontal tail equalized. Regards, Jan Novick" 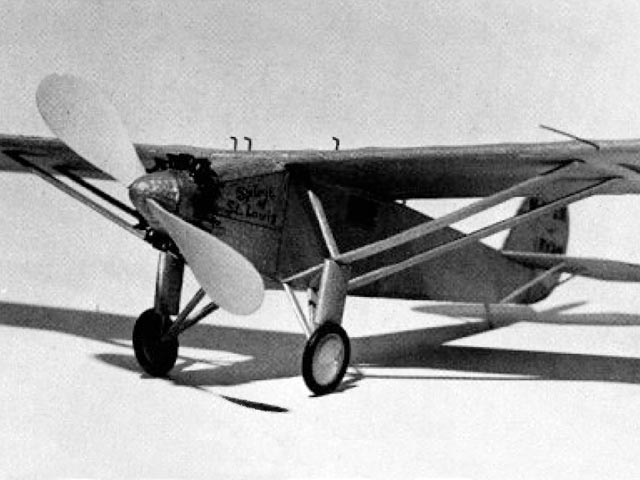