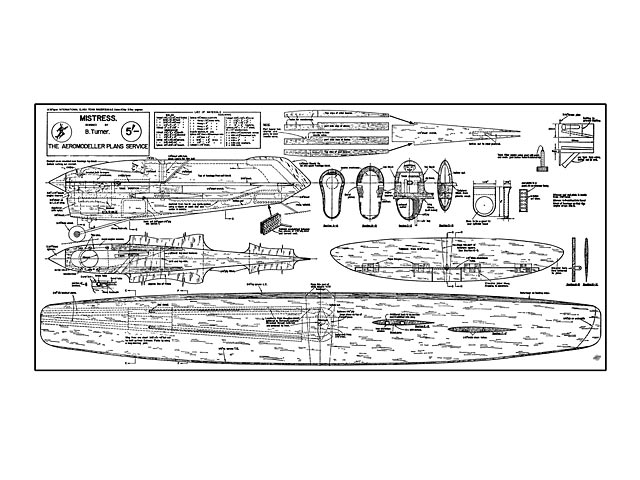 OVER the last few years the Turner/Hughes team have developed this Racer for serious competition flying and have achieves a most commendable record of successes.

A good Team Racer must fly as fast as possible, handle well in the air and on the ground. But, above all, it must be consistent in its performance. Every endeavour has been made to incorporate all these points in the design, but consistency can only be obtained by the team of a pilot and mechanic operating the model.

Many people think it necessary to do 95-100 mph to have a chance of winning, but this is not true. In good conditions a model doing 90 mph with two stops can turn in a time of 4:45. However, when one refers to 90 mph a genuine 90 is meant. It's no use whipping in practice and kidding yourself as this only leads to bad settings for the race. If you let the model fly itself, you then find its true speed and how many laps it is doing.

One thing which spoils many a good T/R is a bad tank design or a badly positioned tank. This can cause both loss of speed and laps. The tank in this model has been found to work very well. However the position cannot be guaranteed as this varies from model to model.

It is preferable to have the motor slightly rich on the ground and leaning out in the air. This effect is obtained by moving the tank to the far side of the fuselage. By doing this, one ensures that the model gets off the ground when otherwise running very lean.

T/R fuel has to be a compromise because you need speed, laps and easy starting. Brian Turner favours a high oil content fuel which works in both Oliver and Etas equally well; 27 per cent Castrol M, 27 per cent Ether, 43 per cent Paraffin, 3 per cent Nitrate. Recommended propeller is a 7 x 8 in. Tornado Plasticote, they seem to rev a little higher than any other wooden props. However, these are almost impossible to obtain and the next best in this team's opinion is a 7 x 8 in or 7 x 7-1/2 in Rev up which is almost as good anyway.

The model is of purely simple construction being mainly of block balsa. Commence construction with the engine mounts, these are of hardwood with 1/8 Dural strips screwed and Araldited to them. When dry, bolt the motor in position, thus during the fuse-lage construction, you ensure the engine lugs and mounts are parallel, this prevents distortion of the motor when the model is complete. Now cement the 1/2 in balsa crutch between the bearers and the 3/16 strips on top.

Cement the 3/8 sheet under the crutch, a piece of 1/8 sheet between the engine and the LE of the wing position and the piece of cowl in front of the engine.

This forms the centre section around which the model is built. Now cut the top and bottom blocks roughly to shape and hollow out first around the engine. Cement a piece of sheet under the cowl to cover the top of the cylinder head. Cut the top block at 45° where the cowling detaches and let the fin into the rear. Very lightly cement the blocks to the crutch. Then carve and sand the fuselage to its finished shape. Now carefully remove the block and hollow out to about 1/4 in thickness. On the bottom block it is suggested that one carves the exhaust duct first, then the clearance for the controls but leave enough to hold the undercarriage.

Cut the wing from 3/8 sheet and cement the spruce LE and TE in place. Now sand it to section leaving the centre square. Put in the ply bellcrank support and make the lead-out pipe grooves. Fit the controls and cover the lead-outs with sheet strips. Shape the tail in the same way as the wing, leaving the centre square. Cut out the elevators and join them with the 16 swg piano wire horn. The elevator horn is hard soldered to the elevator joining wire in the centre..." 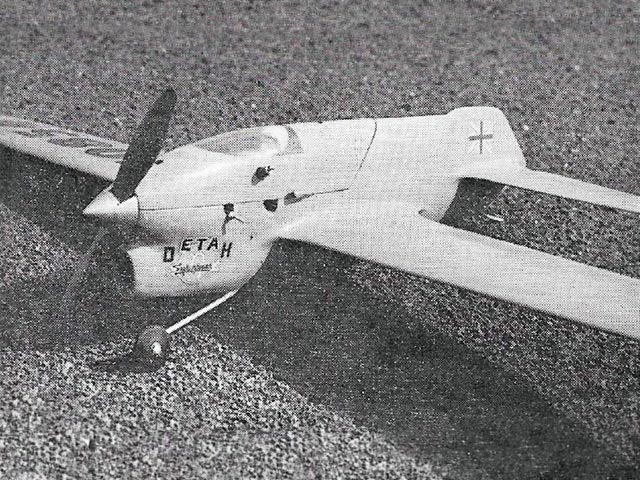