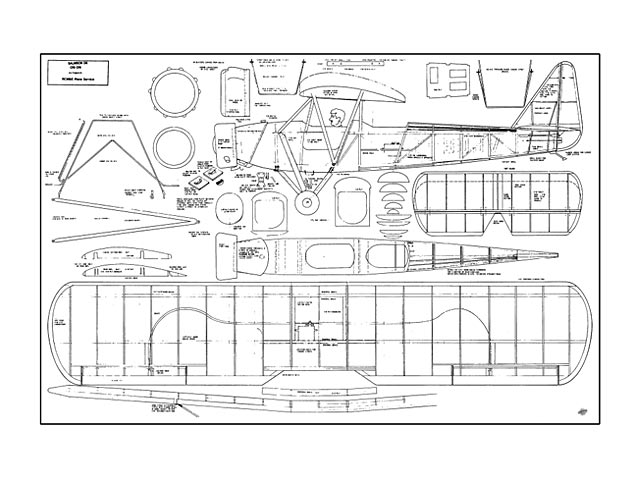 In recent years a Frenchman named Michel Colomban has become well-known for his tiny, twin-engined monoplane Cri-Cri, distinctive because of its pair of single-cylinder engines mounted on outrigger struts at the nose. However, the model featured here is a much earlier design, built by Salmson in 1936, which was the first to be so named.

This D6 Cri-Cri was designed as a low-cost trainer for the French aero clubs, and 300 were constructed by various manufacturers with 60hp Salmson 9Adr power. Some aircraft were fitted with the 85hp Salmson 5AP-01. A later version featured enclosed cockpits and an 85hp Salmson 5AQ; this was known as the D7 Cri-Cri Major, a few of which were put back into production after the war. A small number of Cri-Cris are still in service today. Now to the model construction!

A French fuselage: Use hard 3/16 longerons and forward cross-members, with medium grades at the rear. It will be necessary to split the forward portion of each longeron to allow bending without stress. Actually, I rarely use any balsa thicker than 1/4 for I am a great believer in laminating structures; it has become a natural habit so it is no bother to split the longerons before assembly with a stripper. When glued up a stress-free structure results. Note also that there are no ply doublers in this model; totally unnecessary!

The side frames are filled-in with 3/16 sheet back to the rear cockpit and the top and bottom of the fuselage are planked to the rear of the cockpits, so who needs plywood? Of course, I have chosen 1/8 ply bulkheads to carry the stress of cabane and undercarriage mountings. A word of warning here. Make sure you use a plywood (preferably birch) with three equal-thickness veneers, not the stuff which has crept in lately which features a thick core and two thin facing veneers, and is useless for our purposes.

Assemble the basic box frame from the two fuselage sides, the 1/4 in ply nose former and the two main 1/8 ply formers. Make sure that side and downthrust is incorporated. Use a fuselage jig if possible to ensure even curvature of the sides in plan view. Next task is to form and locate the two undercarriage mounts, fixing with 8 BA bolts. Remaining wire-work may now be added with the rest of the formers and the tank of your choice can be fitted. Now plank it all in!

Engine mounting is quite straightforward. A SLEC (or similar) mount is bolted to the nose former into which holes are drilled for fuel tube and throttle linkage. The cowling is created as shown on the plan and screwed directly to the nose former. Fit the 1/8in ply tailskid mount. The skid itself consists of 16 swg wire. Note that the fuselage door hinges to starboard, allowing access to radio gear even with the wing fitted. As the undercarriage radius rods are pivoted you may care to fit a sprung oleo leg. I chose not to, relying on the tyres to absorb landing loads. A double-wire rear radius leg is essential to prevent buckling.

Tail feathers: Nothing unusual here. The centre core is from 1/16 sheet, ribs and outlines are added afterwards, as is usual practice these days.

Undercarriage: Having fitted brass mounting plates to the formers, and with the oleo legs and front cabane braces fitted in place, it remains to bend the front and rear radius rod ends and feed them through the plates, soldering a short piece of brass tubing to the projections, thus locking them in place. This method allows the radius rods to pivot freely.

Mainplane: Completely standard construction again. I chose a 1/8 liteply centre-section base for two reasons; it is a strong base for the cabane struts, mounted by self-tapping screws through into its 3/8 wide doublers. It also makes for a strong spar mounting.

The aileron servo is side-mounted on the baseplate; the lead passes down a strut into the radio compartment. The wing is made in one piece. Thanks to self-tapping screws into hardwood blocks it takes only a minute or two to dismount the wing. In truth, I hardly ever dismantle my model as it fits into my car quite happily. Strut and oleo leg/ axle fittings are Lucar solder tags; whatever you do, choose substantial ones.

Film wing covering allows the use of this material as the hinge. Solartex is most realistic. To ensure free movement I split the covering along the hinge points, leaving 3/4 in wide sections at appropriate hinge points. This gives a close-fitting aileron which can accommodate any wing bending under load.

Rib stitching is simulated by laboriously chopping fuse wire into 1/8 lengths, gluing to the covering over the ribs and then fitting 1/4 in strips of masking tape over the lot. When sprayed silver (I use acrylic Pactra paint) the result is very good.

Flying your Cri-Cri: Take-off is very scale-like thanks to the model's rigging angles. The tail is up immediately on release, and after a run of about twenty feet a touch of up will lift her off beautifully. Climb is steady and controlled easily with throttle. Turns cannot be accomplished on aileron alone but require some rudder input. Loops present no problem. Just remember to keep the CG position well forward (recommended for all scale aircraft).

At approximately 3 lb flying weight the glide is most impressive. I originally thought it advisable to incorporate an oversize tailplane because Cri-Cri has a relatively large wing and is quite short-coupled, but now I am certain that a scale tail would be just as effective.

Scale note: the actual aircraft modelled, D6-3 No.48 was owned by Cie Francaise d'Aviation; it was all-silver with black lettering. A photograph of this machine was published in Aviation News, Vol.14, No.3 (July 1985) and reprinted, at a smaller size, in Flying Review, Vol.19, No.9 (May 1964).

Now go out and enjoy some .20-powered scale fun flying!" 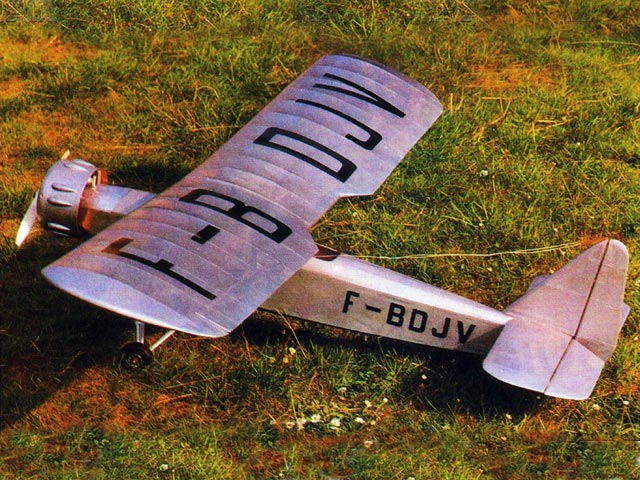