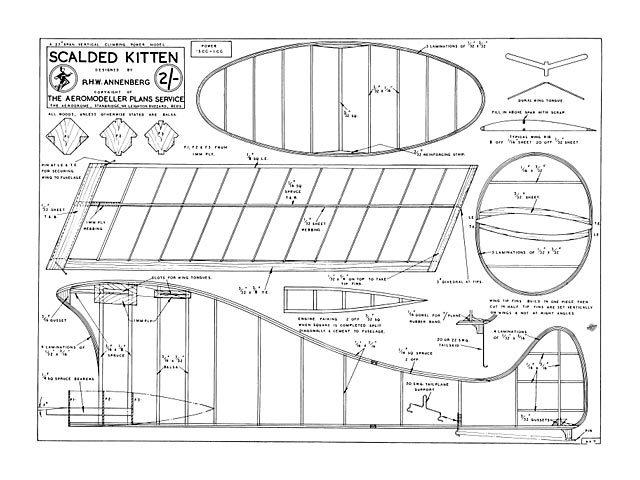 DESCRIPTION: Any model from the LSARA stable is of interest to keen aeromodellers, and Scalded Kitten is of sufficiently startling design to whet the appetites of all contest flyers. Parallel chord swept forward wings with end plates are attached shoulder high to a profile fuselage to which a square pod like body has been added. Tail unit is attached below the fuselage. Construction is simple, embodying a careful mixture of balsa and spruce for great strength.

PERFORMANCE: Scalded Cat - a development of this design but requiring considerable trimming skill - was demonstrated at this year's Nationals and had a climb excelling any model entered in power events at that meeting nearly 3,000 feet per minute at an angle of about 85°. The Kitten will not quite achieve this, but is certainly offered as the simplest vertical climbing model we have yet seen. Those who wish to attempt Cat performance may enlarge the plan to 1-1/2 times full size and fit an Elfin 1.8 cc in lieu of Amco .87 cc, or similar fitted to Kitten.

POWER: For Kitten, Amco Mk II .87 cc fitted to original, but any engine of .5 to 1 cc will suit with modifications to 'stick-on' fuselage body. Airscrew 7 in diameter, 4-5 in pitch.

NOTES ON CONSTRUCTION: All spruce - spruce or spruce - balsa joints should be made with Durofix or lePages' cement. Body is made separately from profile fuselage, slit diagonally and cemented each side of profile. Those desiring greater engine accessibility can move forward engine another 1/4 in. Wing end-plates are set vertically, not at right-angles to wing. A small trim tab may be fixed to tailplane to assist in getting maximum climb angle. An optional trim tab may also be added to port wing, 3 in by 3/4 in, located with its centre 3 in from tip.

NOTES ON SCALDED CAT: The larger version obtained by scaled up 1-1/2 times originally had a profile depth of 6 in, but straightforward scaling up will produce a reliable model. The final version illustrated without end plates to wings is very tricky to trim, though magnificent in performance, and builders are recommended to stick to plan design, at any rate until flying is fully mastered. " 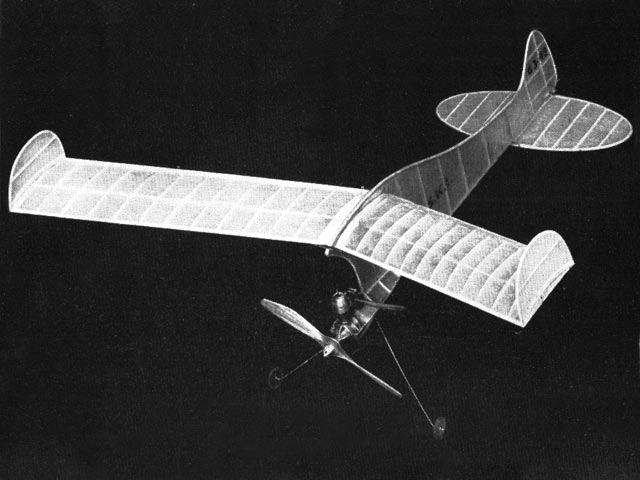