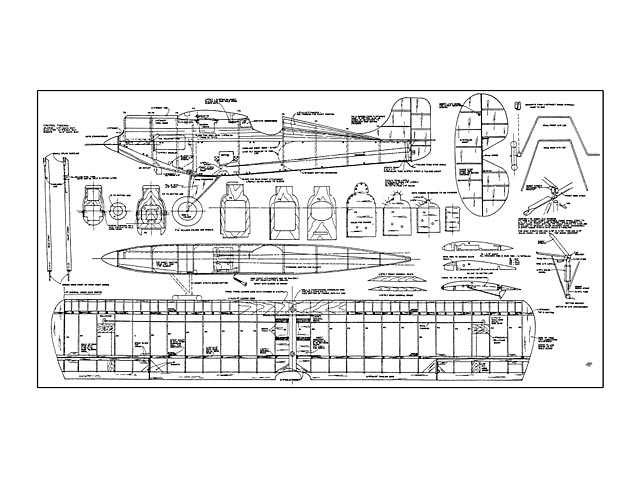 Orlan Corben designed a whole series of different lightplanes such as the Baby Ace and Junior Ace in the 1930s. The Super Ace was featured in a series of articles in Popular Aviation in 1935. The aircraft was powered by a modified Ford Model A car engine. Originally the span was 25 feet, but Corben increased this to add extra area for people who lived at high altitudes.

The model is designed to the original 25 ft span as that was the available documentation, ie the Williams Brothers' plastic kit three-views. It is as accurate as possible.

I designed it so that Dave Perryman could use his OS FS 20 in it. The model did fly on that power, but really needed more, so he fitted a Super Custom 30 FS which is exactly the same physical size. Flying the model Most of my designs fly straight off the board, but this one didn't. The first flight was made in a 10 mph breeze and the model was found to be in dire need of downthrust. The test pilot had one heck of a job controlling the model, but did get it down in one piece some distance downwind.

Dave added two degrees downthrust and the following week in calmer conditions we tried again. This time there was a lack of sufficient power for some reason and I swapped Dave my SC 30 for his OS 20.

On the third weekend, the model took off with ease with me at the controls. This time it flew with authority and we found out why it had been so difficult to control on the first attempt.The ailerons are virtually non-effective most of the time. Apply full aileron and nothing happens. Touch the rudder and it tries to turn on its back.

Now I know of a full-size Aeronca Chief that flew in exactly the same manner and my model of the Aeronca Defender has the same characteristics. It was soon found that the Super Ace must be flown with co-ordinated turns. Apply aileron and a touch of rudder and she goes round perfectly - a good case for using a CAR (coupled aileorn and rudder) mix on your tranny.

I handed over to Stuart Pickett who flies while I take photos and he was soon doing low passes with turns round the camera as the photos show. The result of this is that we can say the model flies very well, but does call for an experienced pilot who is aware of its peculiarities.

I consulted Alasdair Sutherland, my aerodynamics guru, who suggested that this handling is caused by a very strong lateral stability, partly because the wing is well above the CG and because of the interference effect of the fuselage. Alasdair suggested that rigging the ailerons 2 or 3 degrees up might help. He did have one or two other suggestions such as slats or a turbulator strip, but these would be non-scale.

Dave Perryman is still gaining experience, so will be shelving this model until he feels more confident of flying it safely. Unfortunately he had removed the engine and radio before we could try out these ideas.

Construction: This model is remarkably easy to build because (a) it is a simple shape, and (b) I spent a lot of time working out the easiest way to do things. I am lazy!

The fuselage is built in the conventional way. Two 3/32 sheet sides with 1/32 ply doublers are made up and these are joined with Formers F-3 to F-6. The rear part of the fuselage is pulled in and joined at the tail with a piece of scrap wood in the middle. This takes the hinge at a later date.

It makes life easier if you prepare F-2 at this stage. Glue the 1/8 ply doubler behind the engine mount location and fit the blind nuts for the engine mount. Now the front of the sides are pulled in and joined to F-2 and F-1. This must be done over the plan to ensure that it is true. 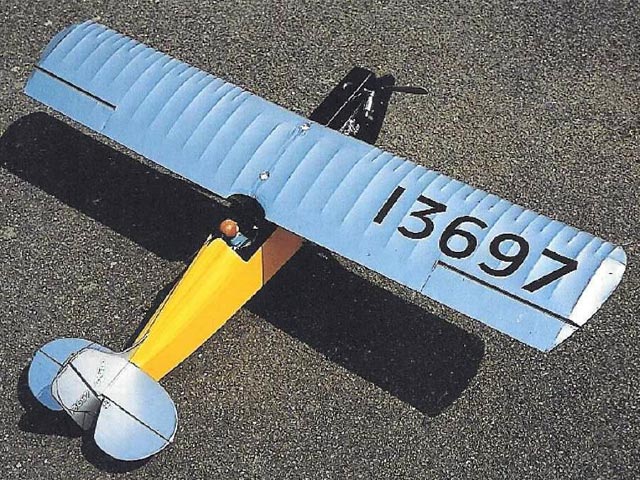