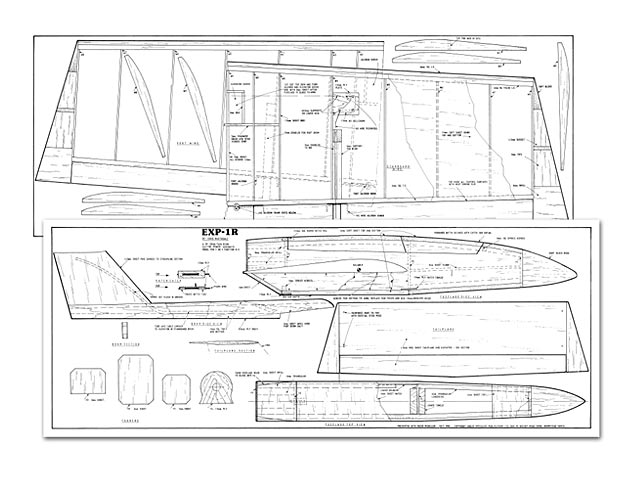 I have been flying electric powered models for almost two years now, and I have been striving to produce some unusual but attractive electric aircraft. Readers will have probably seen my previous design Electro Jet (oz11303) in another modelling magazine, which has proved that electric flight is not all large area, lightweight and flimsy aircraft but can be compact, attractive, manoeuvrable and lots of fun.

I decided to continue my efforts in producing attractive, unusual models and this, my latest creation, has seemed to spark off quite a lot of interest both in my club at Widness and a couple of others in the North West area. This model with its twin booms, high mounted tail and pusher engine configuration does look very different in the air to say the least.

What's in a name? The name 'EXP 1R' was arrived at mainly due to my hopelessness at making up names and also making templates for letters!

The original was named EXP 1, but unfortunately it met its demise on its first outing, due to radio problems. After analysis of the disaster I discovered to my horror that I had been flying with no aerial on my receiver yet was able to achieve some 80 metres range which, for my Century Systems club receiver, is exceptional (excellent bit of kit, I would recommend this equipment to anyone - provided it has the correct antenna for proper reception). Anyway, I digress; the original model flew so impressively while it was in the air I just had to build another to replace it, hence the birth of EXP 1R.

Many people have asked me why I use a flat-bottomed wing section on my electric models. The answer is simple; (i) for ease of construction, ie the wing can be built flat on a board and requires no jigging, and (ii) flight performance - for a given speed a flat-bottomed airfoil section will generate more lift than a symmetrical airfoil, so, at the end of a run when power is at an absolute minimum, landings can be stretched that much further using a flat bottomed wing without the model falling out of the sky. Now, let us cut some precious balsa.

Wing: I always seem to opt for constructing the wing first when I am building a model. Commence by forming the two wingskins by butt jointing two 100mm wide by 1.5 mm thick sheets of balsa for each skin. The top skin will require a further 25 mm wide strip glueing on to allow for the curvature in the wing section. Set the skins aside to dry and, in the meantime, cut out all the ribs and make them all the same size.

Once the wingskins are dry, sand them smooth and lay the bottom skin on a flat building board and transfer all the planform and rib spacing measurements from the plan to the bottom skin. Glue on the 6mm square false leading and trailing edge strips and trim up all the ribs to the correct length, cutting them off at the trailing edge.

The correct taper in thickness of the wing can be achieved by skewing the template on a full-size rib and trimming to shape. Glue in all ribs, 3 mm horizontal grain spar and the extra supports for the booms (note that the starboard side is different to accommodate pushrod exit). Glue in the 6 x 3 mm balsa supports and the 1.5 mm ply bellcrank plate, fabricate belicrank and pushrod assembly and install into the wing. A good tip here to keep the bellcrank at neutral is to make the pushrod from the bellcrank to the centre of the wing the correct length so that when it hits the centre rib the crank is at neutral.

Plane the leading and trailing edge strips to profile of wing section and glue on the top wingskin. Use plenty of pins to hold every joint down both to the ribs and the leading and trailing edges. You will find that the top skin will require trimming along the leading edge to facilitate the adequate securing of the sheet at this point. Once this assembly has dried overnight it can be lifted from the board, all waste ends and edged trimmed up and the leading edge capping fixed in place. Add tips, tip gussets and filling pieces and sand to shape when dry.

All that remains now is to make up the ailerons from 32 x 6 mm trailing edge section and glue on the aileron cranks. The bearings for the cranks are formed by grooving a piece of TE section and fill with epoxy, grease the cranks with Vaseline and put this assembly in place on the wing. Once the epoxy has set the cranks should remain free..." 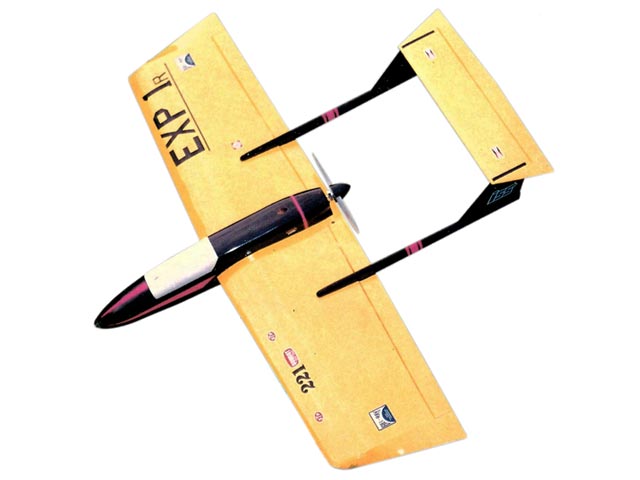