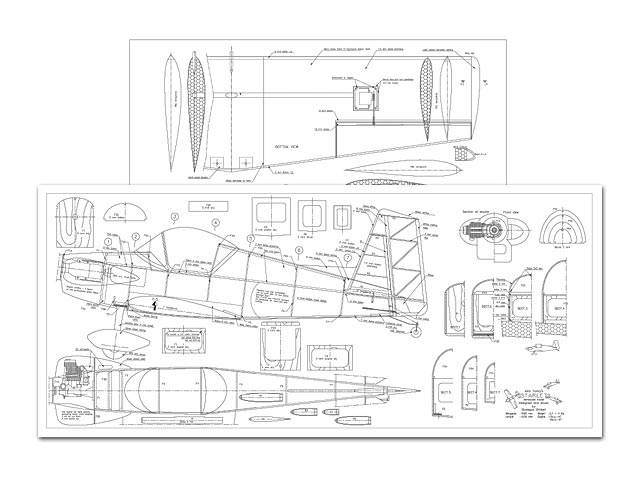 Quote: "Hi Mary, One more from Italy. Published on Italian magazine Nov-Dec-1999, designed by me, built by the late friend of mine Claudio Rizzi. Was once powered with 4T - 90 engine and now refurbished to fly with a gas 20 cc engine. Fast and manouverable, yet not prone to unpredictable manouvers and tip-stall resistant as proved by the current pilot. Last week end I was looking at the 180 turn with rear wind and low throttle as landing manouver waiting for it to occur. Ciao, Beppe"

Note the 'original' drawing here is the CAD zip download (in dwg format). That's the file that Giuseppe sent us, and that is his design, his work. The PDF file you see here is really just a taster, a PDF file in this slot for Oz users who don't have a CAD viewer.

Note the article text is in Italian.

The Starlet is a 'home-built' single-seat aircraft made entirely of wood. It was designed by Australian aeronautical engineer John Corby to participate in a competition sponsored by the Rollason Ardem Engine Company. Originally it should have fitted a VW engine suitably adapted to the power of 60 HP, but recently Rotax engines up to 75 HP have also been installed.

The Starlet is a small aircraft with a wingspan of 5.63 m, total length of 4.5 m, wing area of 6.35 m2 and all up weight of approximately 340 kg, maximum speed of 256 km/h. He is able to perform aerobatic maneuvers with a load factor not exceeding +/- 4.5 G. In Australia he has participated in various aerobatic competitions in the most distant years, even managing to win some. The structure, as mentioned, is in trellis wood, the fuselage and the leading edges are covered in aeronautical birch plywood.

In an issue of Volare magazine a few months ago I saw a photo of a model built in Italy, I think in Veneto, while I understand that there is another one under construction in Rome.

Model: The model was designed three years ago for a friend, who took it easy on the construction which is, moreover, extremely simple. It was finally tested in November 1998. The Starlet was designed for an OS 90 - 4 stroke engine, but any 10cc - 2 stroke engine is more than capable of powering this model.

The prototype with the Surpass, which pulls a 13.5 x 8 Graupner propeller, is capable of performing any aerobatic maneuver. For realistic level flight it is advisable to use the engine at half throttle. Although the depth lever arm is quite short, with the center of gravity placed at 25% of the average string, the Starlet has proven to be an extremely stable and easy to fly model. Take-off requires only a pinch of rudder to the right for the first few meters of travel and when the tail wheel rises, a tap of the elevator is enough to take the model into flight.

The prototype required only a click of up trim; no other corrections were needed. To stall it, the elevator must be pulled to the limit with the engine at idle. Only after the model has slowed down to the maximum is there a hint of a wing tip falling. Within a few meters, gaining some speed, the model fully regains its maneuverability.

In the prototype we used a loaded nylon trolley, produced by Aviomodelli, with the relative fairings for the wheels, which adapts perfectly to the line of this plane..." 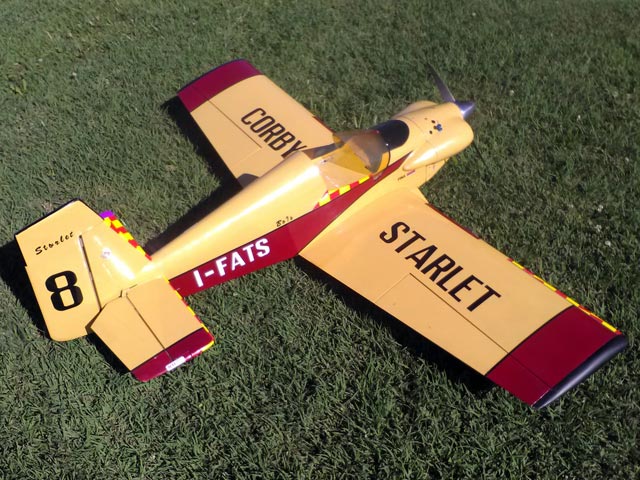