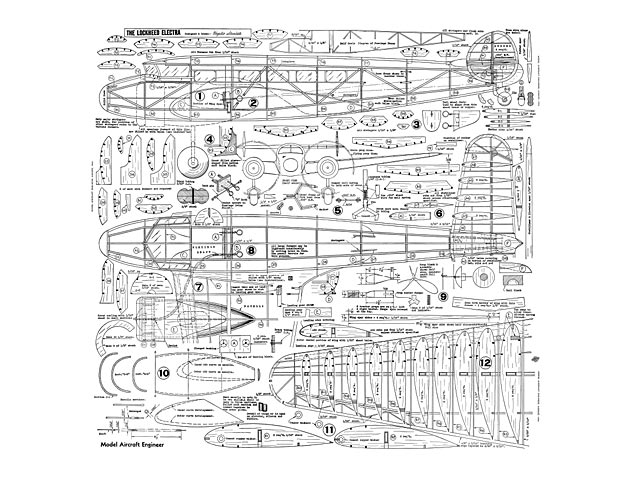 Quote: "Opening a New Era in Model Science! An Enclosed Power, Flying Scale Lockheed Electra. Embodying the first successful solution of the power transmission problem for twin engined scale models, this 3/4 inch to the foot reproduction of the World's fastest transport is the trail blazer to a whole new field of Model Building. By Vigilio Sturiale.

Model Aircraft Engineer is proud to present herewith its contribution to the ever advancing science of miniature airplanes. The gearless, pulleyless, angular drive, power transmission used for the first time on this model of the Lockheed Electra, allows almost 100% efficiency for the two rubber band motors. The device described in this article not only allows accurate scale replicas of twin or outboard engined planes, but also allows you to build successful flying scale models of autogiros, one of which we expect to make the feature model for the October issue.

The real Lockheed Electra, with its fifty-five foot wing span is an extremely well designed ship, and for that reason, we have been able to keep the same proportions in our flying scale model of it, with changes in the landing gear and props only. It is rumored that the Electra will be entered in the Australian Race, and the speed of the big ship is easily great enough to allow its competition. The model shown here will be like its prototype, an extremely fast ship.

Notes Before Building: The master model from which these plans were drawn, balanced perfectly upon completion. Before cementing in place, all the large formers were hollowed out with a sharpened pencil ferrule and tubes sharpened at one end. The wing, stabilizer, and rudder ribs were also hollowed out. Medium balsa was used extensively. The author advises the builder to hollow out all of the above mentioned parts.

Fuselage: This fuselage is the usual frame and former type. Two fuselage sides are made exactly alike and coupled together by cross braces. A 1/4 in section of the bottom longeron is cut away to allow the wing spar through. It would be advisable to build a jig for the sides of the frame so that accuracy may be assured.

The solid nose block is cemented to the front formers. The window outlines are cut to shape from sheet balsa and cemented in place. One part of the front window frame will have to be curved both ways, ie curved from the side and also from the front, so as to follow the contour of the fuselage accurately.

The following instructions will be found helpful in filling in the nose of the model. Take a piece of 1/8 sheet balsa about 3/4 in wide and about 3 ft long. Bend this strip (over a candle flame) around in the shape of a circle. This in turn is cut up into sections about 3 in long. These pieces are then cut slightly larger than the opening they are to fit in, beveled, on all edges, forced in the opening and cemented. This is done to all the openings of the nose and when cement has dried thoroughly, the projections cut off and the surface sanded smoothly.

Wing Construction: The various wing ribs are cut out from the required stock, two of each required. The ribs should be hollowed out for lightness. Holes are made in the ribs through which the flexible shaft passes, and these holes are reenforced by cementing copper washers, full size given in the drawing, to both sides of these holes. Cut all slots for main spar, stringers, sub-spar and leading edge.

The wing spars are of the box type, ie two sides, a bottom piece and a top piece. As the names implies these spars are built like a box, and therefore need no detailed explanation. It would be wise to build a simple jig to hold the ribs in perfect alignment while the cement is drying.

The spar should first be laid over the drawing then the ribs cemented to it. The leading and trailing edges, sub-spars and stringers are also cemented in at this time. The spar is sunk into the ribs and therefore there will be little openings in the ribs after the spar has been cemented in place. These openings should be filled in with rib stock. Cut out landing gear spars and cement them in place.

The ailerons are built independent of the balance of the wing. Diagonal ribs in the ailerons should not be forced in place. The tips and fillets are made as shown, and cemented in place. Leading and trailing edges are sanded to the proper shape. A section of the leading edge is cutaway to allow the flexible shaft to pass through it.

The leading edge covering material is of 1/32 flat stock and is very pliable when doped. Before the dope dries, the stock is bent around the leading edge and pinned in place. When dry, remove it, cut to proper size to fit from the first upper stringer to the first lower stringer, and cement in place. A small hole is cut in this covering through which the flexible shaft passes. This hole is reenforced by cementing a copper washer over it.

Flexible Shaft: Cut the coil spring into two lengths, 6-1/2 in long. The solid shafts which are to be soldered to this coil are cut to 3 in lengths. These shafts are inserted in the bushings, flatened at one end, at the flatened end hammered back into the bushing, thereby cutting a keyway into the latter. The bushing is filed a. little so as to make its diameter a trifle less than originally, and forced into one end of the coiled spring. Make four such devices. Now with the proper soldering equipment, the bushings and shafts are soldered into the coiled spring.

Bearing Block: The bearing block is built from two-ply laminated stock 3/16 thick, with flanged bushings cemented in place. The flanged bushings are made by soldering a copper or brass washer to a piece of brass tubing..." 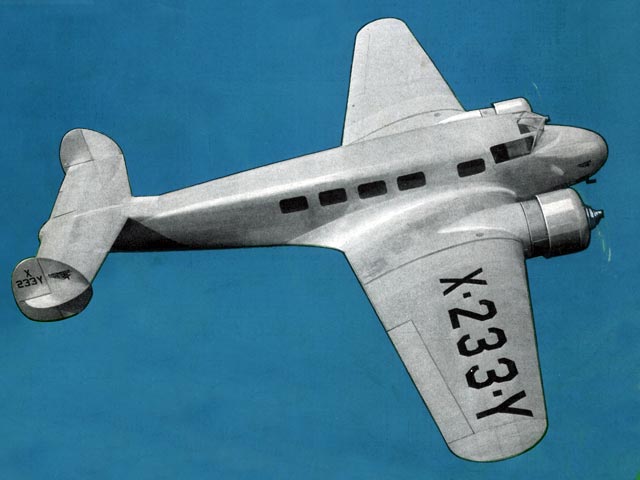 Doh. Have just corrected the spelling, and now I see this is a duplicate of the old (low res) plan at oz3181. But this one here is a much clearer scan, and also complete with full article and pics, so we'll redirect from the old page to here.
SteveWMD - 27/09/2021
Born in 1916 from an Italian immigrated family in USA. Died in 2015 at the age of 99. In 1939, he joined Grumman Aircraft Corp. There, as an aeronautical engineer, he was a key contributor to designs of tail hooks, now an integral feature of U.S. Navy planes. He helped design and develop the lunar module landing gear used on all Apollo missions.
Pit - 27/09/2021
Add a comment