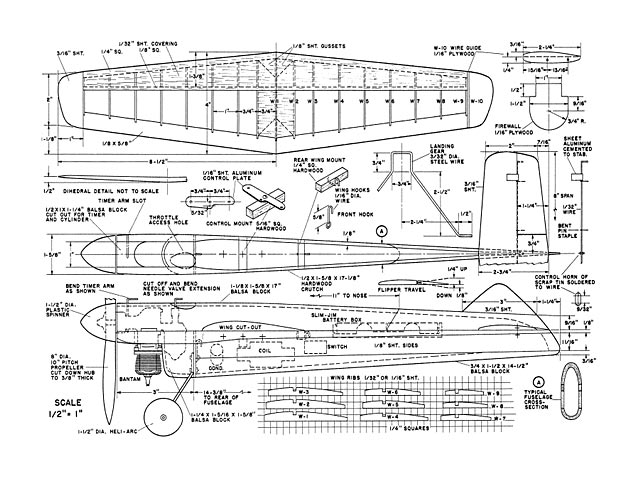 Quote: "Smooth and simple is about the best way to describe this sleek little Class II U-control model. This model represents the results of a great deal of effort to develop a Class A U-control model that would compare favorably with its larger, more powerful contemporaries. Its amazing record of ability and consistency, which includes the official Class II world's record of 72.58 mph made at the Wichita Nationals, is ample proof of its success toward this goal.

Construction of the model is so elementary that it presents a joy second only to its performance.

The first step in construction is to select a suitable' piece of mahogany or similar wood for the crutch and proceed to cut and taper it to the dimensions shown on the plan. This process' is greatly simplified, if a band or jig saw can be used.. If one is not available it is almost certain that with a little persuasion the saw at the nearest high school may be used. After the crutch mounts have been cut to size and tapered, they are laid inverted on the enlarged top view of the plane and the firewall of higrade 1/16 plywood is added.

Now, two pieces of medium 1/8 sheet are selected and cut to the required dimensions for the side walls of the model. After the addition of these, the bottom fuselage block may be marked and carved to approximate shape. It is then hollowed out with a grapefruit knife to the depth indicated on the plans and glued to the rest of the framework. Next, the lower front cowl is marked and cut to approximate shape and then laid aside for future hollowing.

The fuselage may now be removed from the plans and the top body block marked roughly, carved, and hollowed exactly as the bottom was.

At this point it is best temporarily to mount the motor with the regular 1/2 inch wood screws. With the motor in place, the lower cowling can be hollowed out to fit around the gas tank. Upon addition of the spinner, a small block may be placed between the front extremities of the crutch and carved to serve as a timer housing cowling. After the cowling and crutch have been carved to fit the spinner, add the top of the fuselage and fit it to the spinner. The motor may now be removed and laid aside.

A medium hard piece of 3/16 sheet balsa should be selected and the rudder carved from it so that the grain of the wood is parallel to the trailing edge. The rudder should be glued to the body top, using extreme care to attach it so that it is perfectly straight ahead. This part should now be set aside and allowed to dry completely.

The mahogany wing and control mount beams should now be added and given several coats of glue.

Hard 3/16 sheet balsa is advisable for the stabilizer, since it is struck by flying stones while landing and taking off. The stabilizer should be cut to the indicated outline and then sanded to an airfoil comparable to that of the wing - not a symmetrical foil. It is then cut down the line of the flipper and the flipper cut from the rear center section. One thirty-second music wire is used to connect the two flippers and is more firmly attached by the use of small staples made from straight pins. The control horn which may be made from an old tin can scrap should be soldered firmly to the center of the wire. Small U-shaped sheet metal hinges are used to attach the flipper to the stabilizer..." 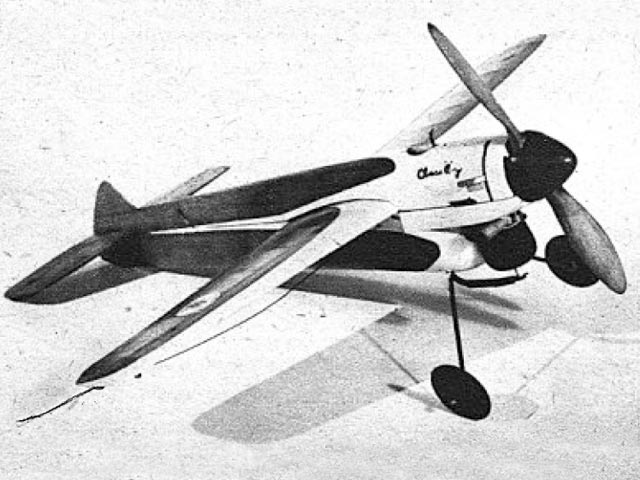