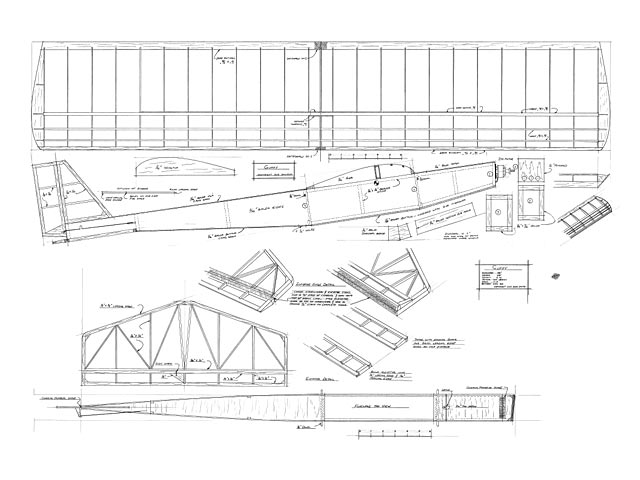 Quote: "Hello Mary and Steve. Please find plans for the Guppy, built by members of the Old Pharts Club of Alabama and others, at least 12 built so far and another under construction.

The first two Guppies were all styrofoam, but after those two, no more good foam was available, all local supplies were the recycled kind, not suitable for hot wire cutting. The Guppy was then re-designed for traditional balsa construction.

Its purpose is to provide an easy to build and easy to fly RC model anybody can handle. If you can't fly a Guppy, there's no hope for you. I've flown mine on a calm morning, after a hand launch just letting it fly in big circles by itself, never giving a command until it drifted too far away. It's like free flight with occasional RC interference.

My Guppy, number four, is 5 years old without a scratch, used mostly for new members and to test unknown receivers. I've let people fly it who have never seen a transmitter, no problem as long as I stood close by for safety.

We've built several for others who didn't have time to build. One for Robert Worsley, who built RC twenty years ago, still flies after three years of heavy use at his farm in darkest Georgia. Fiberglass covering on the deep Guppy fuselage lands smoothly on grass, better than any landing gear, thus the name. Lots of dihedral plus a big rudder makes for easy turns without ailerons, easy to build wing.

I still have styrofoam Guppy #2, now with added floats, calm water required with no wind.

Included with the plans is Guppy Notes, a complete manual for assembly and flying, maybe more than an experienced builder needs but helpful for the beginner. Also, there are separate files for fin, stab and rib pattern so you won't have to cut up your big sheets [see supplement named sheets zipfile].

Guppy will glide better if you program the brake to stop the prop for the glide It will ride a thermal better than most gliders because of its tight turning ability. You will learn to find and stay in thermals if you fly a Guppy.

I hope you will enjoy your Guppy as much as we have. Any questions, email me at duckwork@bellsouth.net
Doug Smith"

Quote: "Guppy Notes: It’s named Guppy because of the deep fuselage bottom, covered with fiberglass, that it uses instead of a landing gear. On small light park flyer type models, a landing gear is a pain, with wheels too small to roll well in the grass. The Guppy lands so much better on the belly, skidding to a stop in the grass.

It was designed to be easy to build and easy to fly, slow enough to hand launch without taking a step, just run the motor up a little past half throttle and ease it into the air. It’s a little larger than most park flyers but built light at 15 oz with battery. A wingspan of 48 in means it has a very light wing loading.

The little 370 motor pulls it very well on an 800 ma 2 cell lipo. I used a Master Airscrew 7x4 prop to survive belly landings better than a slow flyer prop. There are no ailerons to complicate building, with the amount of dihedral shown on the plans, it turns just fine on rudder.

The fuselage is all sheet balsa, while the wing and tail feathers are built up from sticks.

Don’t expect your Guppy to do much in the way of aerobatics, that’s not what it’s meant for. It will do nice loops but not much of a roll, no spins at all, inverted is possible, but not so great. It’s a nice, slow relaxing flyer, most at home when the wind quits completely at dusk. It’s light enough to ride the weakest of thermals if you enable the brake to stop the spinning prop, turns tight enough to circle in tiny morning lift.

Lots of beginners have flown my Guppy, just throttle it down and add a little up trim for a slight climb and hand them the transmitter. If you can’t fly a Guppy, there’s no hope for you.

I like to build the tail assembly first, then the wing, and finish up with the fuselage. For me, this gives me a better chance of finishing the model in a reasonable time period. OK. Let’s start cuttin’ some balsa.

Tail Surfaces: The entire tail assembly is built up out of sticks, a light and strong construction method. Medium weight balsa is the way to go here, hard balsa is too heavy and soft balsa won’t be strong enough. The stabilizer is 1/4 in thick, while the fin and rudder is 1/8.

A word about balsa - most of the hobby shops don’t carry a lot of balsa these days, since the ready built models have largely taken over the market. If you have to order your balsa, Balsa USA has given me good service. Order about three times what you expect to need, then you can pick the right pieces for your project. Some of what you order will be good, some not so good, and some will be firewood. All of it will be usable at some time for some purpose.

I don’t buy any sticks, but cut my own from sheet balsa. That way I get all the sticks the same hardness. But not everyone has an antique Dremel Table Saw like I do, so there’s other ways.

You can cut all the sticks you need with nothing but a straight edge and an X-Acto knife. I have two, one 48 in and another at 36 in, both aluminum from Lowes. Little patches of sandpaper glued to the bottom keep it from slipping. Without the sandpaper, you’ll never cut straight strips. Anything up to 1/8 thick is easy, but 1/4 inch is harder to get the edges square... 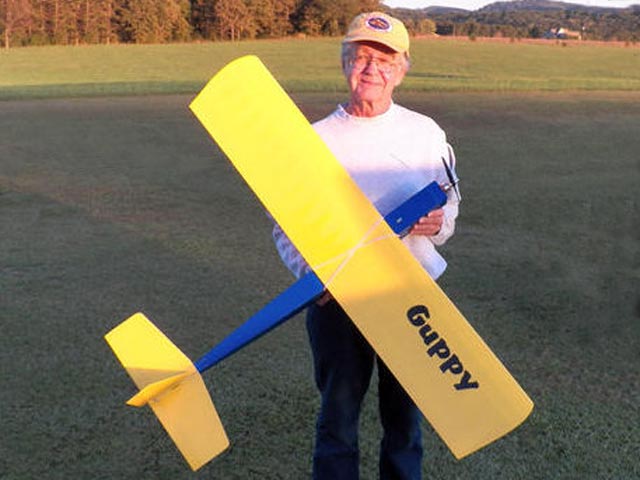 My Guppy is Smith's No. 5, or No. 6. Countless number of flights and always smooth as silk. Great for encouraging and training youngsters in RC. Smith didn't say this in his submission but we've flown these in 15+ mph winds with no problem, even flying backwards and descending like an elevator at Macy's by reducing throttle into the wind. It's my "GoTo" fun airplane.
George Ash - 24/09/2021
Add a comment