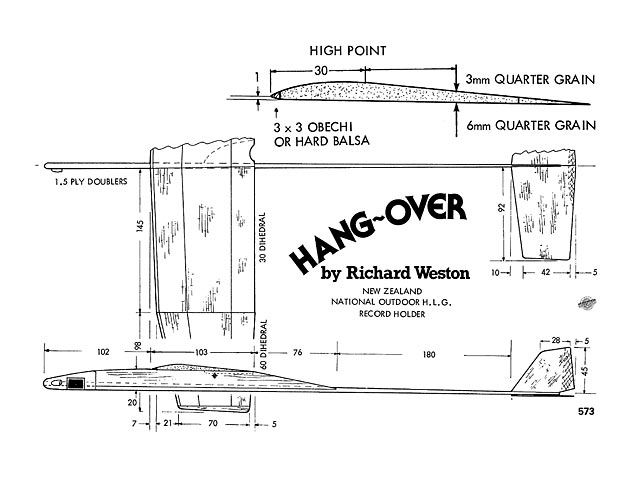 Quote: "NEW ZEALAND RECORD HAND LAUNCHED GLIDER. Richard Weston is one of New Zealand's most success-ful HLG flyers and this month we have a 3-view of his record holder, first published in South Island News. Fly-ing this model,Hangover, Richard achieved six consecu-tive 90 second maxes at the '77 Hamilton Nationals, and a number of later wins.

The model uses a wing of constant thickness, so the tapered planform gives an effective airfoil thickness changing from 6% at the roots to 9% at the tips, and results in aerodynamic washout. Hoerner-type vortex tips may result in some improvement in efficiency, and, if the tip itself has its grain running chordwise, it will at least minimise tip warping. It is important to use only good quarter grain balsa for the tail surfaces to prevent trimming problems due to warps; trailing edges are left un-sealed to allow them to be breathed on for easier bending during trimming. Two coats of sanding sealer are used with a drop of castor oil to prevent brittleness, the first coat being almost sanded off to smooth the grain, while the second is lightly sanded without cutting through to the grain.

A falling weight D/T is used, attached to the rear of the fuselage. The left polyhedral joint is cut through about 10mm, so the tip trailing edge can be washed-in about 1mm, and then cemented. All the other panels are flat, and 1.5mm of left rudder is bent in. Trimming details were described by Mike Fantham P319 June 78 Aeromodeller F/F Scene, but Richard Weston stresses the importance of 'warming up' your arm before attempting full power throws."

Quote: "G'day Steve and Mary. Not many competition HLG's on the site. Here is a competitive Free Flight HLG that I scanned for somebody recently. The plan is not full size but easy to build from the info supplied. My version won the Australian Nationals a few years ago at it's one and only competition and was lost OOS on the last flight. There were no decent lightweight d/t's back then (such as a Button or Badge) and fuse d/t's are banned in Australia due to the fire risk. I am thinking about building another one so I may have some photos to add in a few weeks. Regards, Danny"