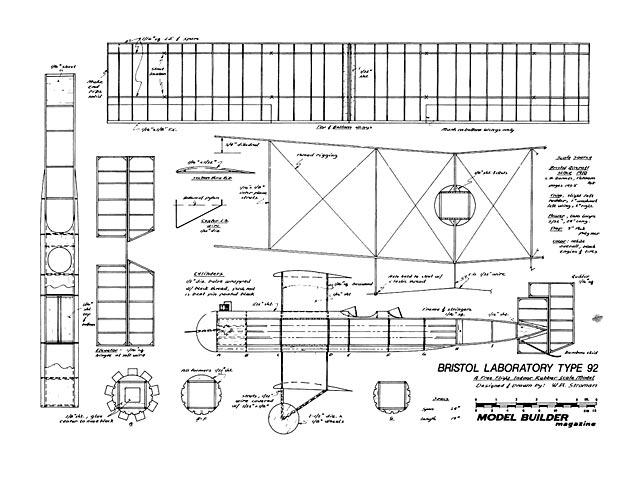 The author is well known for his good-flying models of strange and obscure aircraft of the past. This time it's a flying test stand! Don't be fooled by its appearance, though - it's a great flier.

Good Grief, what the heck is that? Was there really a real airplane like that? You sure build the weird ones. These are a few of the statements you will have to endure if you build the Bristol Laboratory. But when you wind it up and watch it fly, it's worth it, for this is really a good model. It's not hard to build or trim, and it sure is a crowd pleaser.

The full-sized plane was built as a flying test stand to check the cooling problems of the Jupiter engines. It had a square plywood fuselage to which one or two round fairings could be attached. One was three feet in diameter, the other five (I chose to make the three foot one - less frontal profile). The large wing gap was to avoid any turbulence on the fuselage during the tests. The wide track landing gear was to avoid any ground looping. One good thing about this plane is that it was never registered, therefore, no markings appear on the wing or fuselage. Just to balance that, the one bad thing about it is that there were only two photos ever taken of the plane. Oh well, one can't have every-thing!

Before we start on the model itself, let's discuss the material we are going to use. I have not indicated on the plans what weight of balsa to use, and this is important, If the model is to be flown indoors, it should have the lighest balsa one can get. Take a small, accurate scale with you to the model shop and weigh each piece until you find the lightest piece. This may get some laughs from the R/C crowd in the place, but it will insure a better flying model. The same goes for the tissue; I used Peck-Polymer white Japanese tissue on mine and it worked great, so be selective. By the way, if you can't get light balsa, send for the price list from Superior Balsa, they have great stuff.

Well now, let's get to building. I like to build the fuselage first, as all the other things must fit onto this. Make the frame on the side view. Be sure to include the post for the rubber peg and the 1/16 sheet insert at the rear. Remove, and make another just like it. Put the two frames over the top view, and put in the cross pieces. While you are doing this, be sure to have the sides square to the table; use a small square or any right-sided object to do this. After this has dried, glue in the insert at the rear as shown; also put the 1/16 sheet on top and bottom between section C and D.

Cut and fit the formers for the sides, top and bottom. By the way, do you have trouble getting the stringers straight from front to back? Here's a method I picked up from Jack McCracken. Cut the slots out on section A only. Then, cut slots in section F. Now lay a straightedge from A to F and draw a line at each slot. This will insure a straight stringer when the remaining slots are cut. Install the stringers now, doing one on each side at a time so as not to warp the frame..." 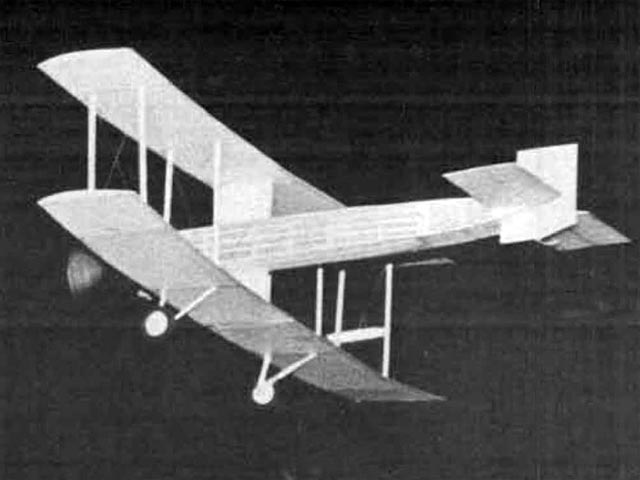 Hi Steve, hi Mary, the "Laboratory" was officially named "Bristol Type 92" and it has its own article on Wikipedia: https://en.wikipedia.org/wiki/Bristol_Type_92. Should make an ideal subject for my first self-constructed papermodel. Cheers,
Martin - 22/09/2021
Got it, thanks, have added new ScaleType and link now.
SteveWMD - 22/09/2021
Add a comment