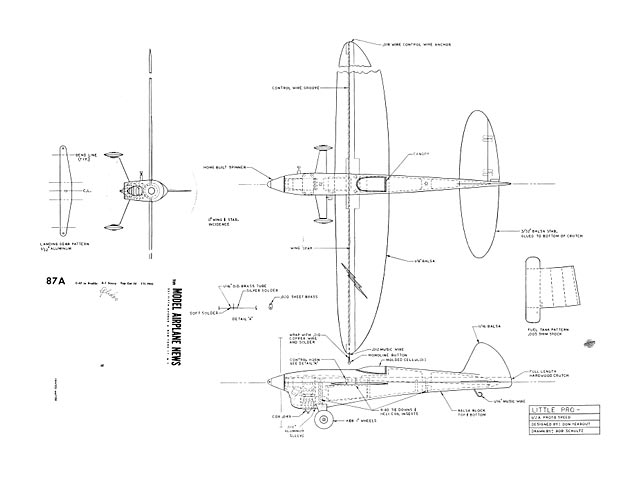 Scanned at 400 dpi from full size.

Quote: "1/2A Proto Speed, fastest growing event in speed, has many adherents who believe that it will soon become the one control line speed event that will have the largest number of contest entrants. Our Li'l Pro should help it along. By Don Yearout.

The new 1/2 A Proto Speed event which replaced the old straight speed class offers a new and somewhat different challenge to the control line flier. The rules are designed to help assure that a large percentage of contest entries make official flights since possibly the greatest criticism of the 1/2 A straight speed has been that in the past only a few of the entries were able to make officials.

This has been especially true at the annual AMA Nationals meet and has been attributed to the difficulty of the event itself, although that may not be the whole story. Since Nationals entries must be in well ahead of time, many contestants enter the event just in case they want to fly it later for championship points, etc. and never get around to it.

It remains to be seen how much easier 1/2 A Proto will be to fly than 1/2 A Speed. The Proto rules call for an 18 inch minimum wing span which will contribute to poor handling in the wind but also should help takeoffs and landings. They also require a fixed landing gear which will eliminate dolly problems and save propellers. At any rate it should be fun so Jet's give it a fair trial.

The fixed gear and large wing requirements will keep speeds comparatively low and emphasize small differences in the design and flying of the competing ships. The times between a first and fourth place finish will probably be very small with the winner being the plane that has had extra care taken in design and construction. With this in mind, 'Little Pro' was built.

As you can see, frontal area has been minimized with a very thin wing, slim fuselage, and clean landing gear. The lightweight construction helps give 'jack-rabbit' starts and increases the top speed. Little Pro handles exceptionally well, even on Monoline and should he a joy to build and fly.

Begin construction by laying out the main crutch on a piece of 1/4 in thick close grain hard maple and saw to shape both inside and out. Drill and tap directly into the wood, the engine mounting holes, wing mounting holes, and two fuselage tie down holes for 4-40 Helicoil inserts. When installing, put a dab of epoxy on the insert. Now epoxy the crutch to a piece of medium weight balsa 5/8 x 1-1/4 x 12 in and set aside to cure.

While the fuselage epoxy cures, it might be a good time to make the wing spar. Use a piece of 1/2 x 1 x 18-1/2 in hardwood. Mahogany was used on the original but maple or other wood can be used; birch works very well. Cut the spar to shape as shown on the plan. One trick I use to trim wood to exact size is to use an end mill in a drill press and mill the pieces to size after roughly sawing to shape..." 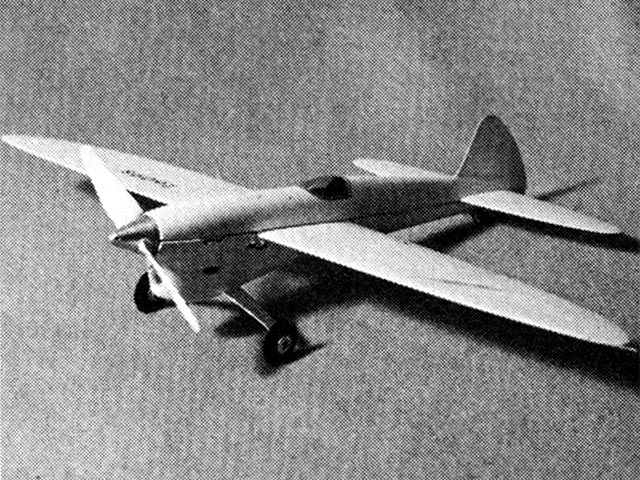 I'm guessing the date is Jan 1969, that would match up with the C-47 and A1 Saucy models, as listed in bottom left corner.
SteveWMD - 17/09/2021
When you bought a MAN plan, if planes are small, more than one of that you ordered where placed in the same sheets, independently of date release. In this case is Sept 1968.
Pit - 17/09/2021
Ah, ok so that was wrong, my mistake. Correct date is Sept 1968, have changed this now. Thanks Pit, Ray.
SteveWMD - 17/09/2021
When the plans were printed, not made with the Ozalid process, MAN liked to use both sides of the paper sheet so they usually printed all the construction model plans that appeared in one specific month. And the printed batch had a limited number so when the plan set was a sold out, no re printing was ever done.
Eduardo Barriga - 20/09/2021
Add a comment