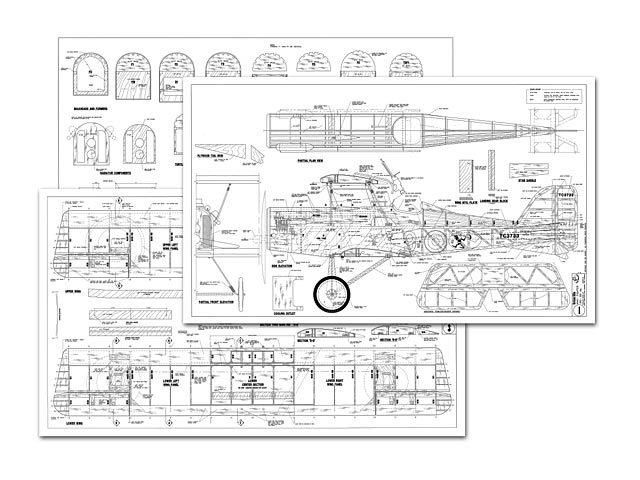 Note this plan is derived from the raw scans posted by ocoee96 on the AF site (see datafile). This version has been aligned and had some minor cleanup.

Note this design is based around using a pair of Balsa USA 'Stick 40' wing kits. But the plan is complete and can also be built from scratch. All ribs are shown.

Quote: "Dear R/C Aircraft Enthusiast, Thank you for purchasing these plans for the 60 inch span RAF SE5a. Although it was designed around a Saito .65 four stroke, it flies well with a .65 K&B Sportster.

If this is your first scratch building project don't worry. It was my first too. I have tried to make these plans as easy to follow as possible. Maybe as time goes by and I do more plans the process will become easier and result in better and better plans. If any errors are discovered please let me know so that I might correct them.

This plane is an offshoot of a 1/5 scale SE5a designed by Vern Sheffield of Dalzell, SC. Vern has a habit of showing up at our clubs events with really nice planes and going home with Best-of-this and Best-of-that Awards. One Fly-in we had a while back he showed up with his SE5a. I wanted one. But it was scratch built and he had no real plans. We struck up a conversation. Vern had sketches and Xeroxes of parts and would be glad to let me see them so I could draft a set of plans. Well the set I ended up with (about 80% completed) turned out to be too large a plane for me at the time. I scaled them down to a more space-conscious 60 inch span and the rest is history. The SE5a is perhaps my favorite WWI fighter so I had no trouble with motivation - just time.

Because it is a 60 inch plane I thought I could utilize a wing kit from a BALSA USA Stick-40 Trainer. I have built 10 of these little planes for myself and others so I was familiar with the construction. This wing must be destined for the Sport Scale SE5a because it fly's like a dream. In fact it has worked so well that I plan to-do a series of WWI planes around the wing kit. Some additional material is needed along with the wing kit but it is probably in your scrap balsa bin in your work shop. All wood, LG wire, Solartex Covering, etc, came from the good folks at BALSA USA.

The drawing was generated on an IBM compatible computer using AutoCAD version 10 c7. A student version that I bought at my local Technical College. I have been working with AutoCAD in my line of work for ten years. I am a professional draftsman with a background in Architecture.

It is assumed that you have some building experience. My best advice to you is to pre-kit the plane. That is, cut out all of your parts first and then build the plane form your 'kit'. It tends to make the job go faster. Thanks again and happy building. Tom Connor"

The Royal Aircraft Factory Scout, Experimental number 5: She is a handsomely proportioned aeroplane. She is admittedly robust, but has an elusive charm and subtle gentleness. But don't take her lightly. It's apparent she means business. After all, she is packing two machine guns.

I've always liked the SE 5a, and a lot of you do too. For a little history I'll quote from the book 'Sagittarius Rising', by Cecil Lewis, a British WWI ace who had plenty of success with the SE 5a. He has just told of his assignment to join No.56 Squadron:

'The squadron was to be equipped with the SE5, the last word in fighting scouts, turned out by the Royal Aircraft Factory. It was fitted with a 140 HP Hispano Suiza engine and two guns: one Vickers, synchronized, and firing through the propeller by means of the new Constantinesco gear, and one Lewis gun clamped onto the top plane and firing over the propeller. To change drums the Lewis could be pulled down on a quadrant mounting. In this position it could, if necessary, be fired straight upwards. The machine (for 1917) was quite fast. It would do about 120 mph on the level, and climb 10,000 feet in twelve minutes. It could be looped and rolled and dived vertically without breaking up. Altogether, it was a first class fighting scow (probably the most successfully designed during the war), and was relied upon to re-establish the Allied air supremacy lost during the winter.'

Of course, these great expectations were later seasoned and a little complaining creeps in:

'In the SE 5, the long stationary engine, the tanks, and the pilot's cockpit behind them meant that the load was spread over more than half the length of the body. It was this that made the machine impossible to turn sharply, and unwieldy in aerial combat.'

Well, lucky us! That's just what makes it an easy to fly it as an R/C model!

Why another SE5a model? Well, most existing designs and kits were under 60 inch span, and we wanted a model that would qualify to fly at IMAA meets. The search for the next size up revealed a jump to 80 in and above, which is larger than we wanted. It had to be powered by .60 to .80 size engines, and use standard radio gear. Tom's SE 5a was built specifically for the Saito .65, but there is plenty of room for other 2C or 4C engines. Tom actually ended up powering his very well with the economical K&B .65 Sportster.

Tom had built lots of Balsa USA Stick 40s for himself and others, and had also kit bashed them into creations that no longer even resemble their humble roots. Well, he noticed that for a 60 in span SE5a, the Stick 40 wing chord was just right, and the kit wing tip could be turned around and re-cut to the SE5a shape.

Tom is a professional draftsman with an architectural background. Using AutoCad Version 10, he developed a set of construction drawings for the RAF SE 5a.

The outlines and surface placements are nearly true scale. The only obvious deviation is the wings' thicker and flat-bottomed airfoil. This model can be sport flown with modest scale detailing, or you can go all out and detail it to the max. The Stick 40 wing kits (available from Balsa USA) not only cut building time, they fly great. They have worked out so well that a series of designs are planned around them. An Albatross DII is already framed up, and a Fokker DRI Tripe (yeah! three wings!) is bound to show up before long. Get on the stick now, and order your plans and materials to join the dawn patrol before the Hun threat shows up!

At first you may have thought that RAF stood for Royal Air Force, but that didn't come into existence until after WWI. Now
you see that RAF means Royal Aircraft Factory, which was true in the days of the full size version. But times change, and around these here parts, RAF stands for Redneck Aircraft Fabricators, and as such we do things a little differently.

First, gather up your plans and all the needed materials. Second, assure that your building surface is perfectly flat, not bowed or twisted, and definitely not bowed and twisted! If your building board is as crooked as the crankshaft from a Rolls Royce Merlin engine, don't expect a good flying aircraft. Third, rather than cutting out a complete kit of parts to begin with, only cut out the parts necessary for each major component just before building it. What? You already did it that way? Well, then you just might be a red - well, never mind that. It's time to put saw, knife, and CA to balsa for your SE5a.

CONSTRUCTION: Begin construction with the tail pieces. There are very few special shapes to make templates for, so cutting out your sub-kit will go quickly. The stabilizer, elevators, fin, and rudder are mostly stick stock - just like you would be provided in a kit.

When I began building I found I had neglected to order any 1/4 x 1/2 balsa sticks. Since I had a Master Airscrew balsa stripper and plenty of 1/4 in balsa sheet on hand, I readily stripped out the 1/2 in sticks I needed. I highly recommend owning a balsa stripper. It can save a trip to the hobby shop, and the sticks are cheaper if you make them yourself.

A disc sander comes in handy for stick construction. You can make accurate joints which will require less glue and be stronger. Cover the plans with waxed paper. Begin by cutting and gluing the perimeter pieces first. Then fill in with gussets and the 1/4 sq balsa braces. The elevator halves can be joined as shown with hardwood like Tom did. I made a joiner from 1/8 music wire and that also works well. Mark center lines on the leading edges of the elevators and the rudder. Then use a razor plane and a sanding bar to bevel the control surface leading edges as shown in the plan cross-section views. Sand rounded shapes into the fin and horizontal stabilizer leading edges.

FUSELAGE CONSTRUCTION Cut out your fuselage sub-kit. Pre-drill the firewall (FW) for engine mount, throttle cable, and fuel lines. Install blind nuts for the engine mount and secure each with a drop of glue. Glue B2b to the lower front of 82 and pre-drill 1/4 in holes for the wing dowels.

Cover the fuselage plan side view with waxed paper. The right fuselage side is framed first. Cut and glue all 3/8 sq and 1/4 in sq balsa pieces. Glue in the 1/4 balsa stab saddle piece. Use a square for alignment and glue FO, FW, B1, B2-B2b assembly, and B3 perpendicular to the right side fuselage frame. Remove from building board. It may look a little flimsy with nothing in the wing saddle area at this point, but it will hold together. Go ahead and remove it so the left fuselage side can be framed..." 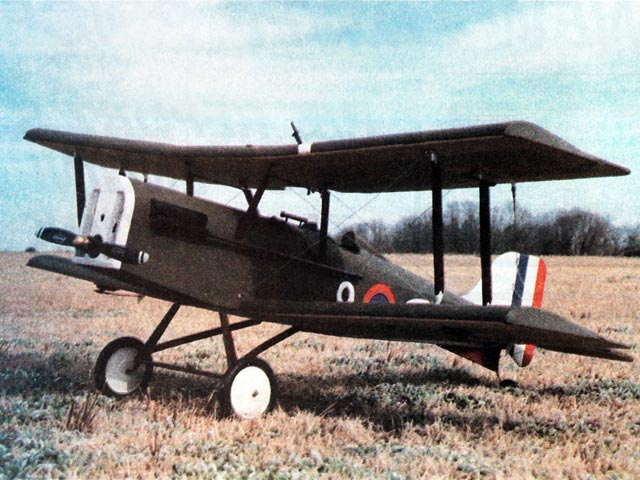