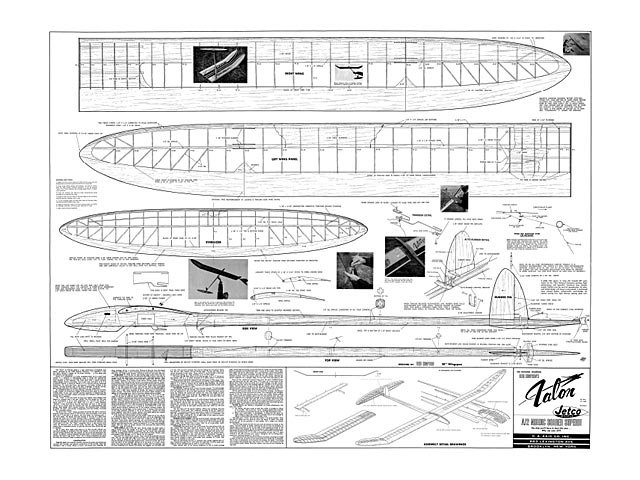 Quote: "The Talon A/2 Nordic glider is a high performance competition type soarer, designed by the 1965 National Champion. It is beautiful in line and highly refined in design for its prime function - a fine glide ratio and thermal hunting ability.

Nordic A/2 competition is a hotly contested event, be it a small local contest or a national or international meet. It draws the experienced modeler, flyers capable of building warp-free airframes and getting the most altitude on the towlines. You must start with a sound practical refined design, build it accurately, trim it with care, and learn to fly it in a scientific manner. A trophy for Nordic A/2 is a hard to come by treasured possession. You really earn them, and become a far better modeler in the process. Success demands days in the field, knowledge of thermal activity, good towing technique and careful observation of the competition.

All contestants start on an equal footing. 164 feet of line and no more. To get a glider up to maximum height is where the skill starts to creep in. It boils down to you, your aircraft and the elements in determining the moment to tow, the climb, release and proper trim setting to ride whatever thermal lift is available.

The Talon is the end result of many such flights, many designs and dozens of contests over a five year period. The first design we tried was a bit inconsistent, a hit or miss proposition. If a thermal was gentle it would turn in a 3-minute max flight, but if it was a more powerful 'boomer' it was more apt to tuck its nose down and spin in. We learned not to use an overly long tail moment arm with an undercambered stab design. Next design had a shorter moment, flat bottomed stab, followed by glider #3 with a still shorter configuration and new airfoils. It proved to be a consistent winner.

The first of the Talon series pre-dates this kit by two years. It was an elliptical tipped version similar to this aircraft, with the lessons of the years built into it. It did well in its season, and even better the following year in Air Force meets. The design met with disaster at the end of a flight after making the most out of a weak thermal when a spectator drove his car forward to watch it land. It struck the antenna of the car, cartwheeled in and was badly damaged. An older glider was used to complete the officials, but it just wasn't our day. The Talon presented here is a new version, built since the Nationals, and is without doubt, the best yet. The design has always been a consistent winner, so give the ship your best efforts and get to building.

We at Jetco have made every effort to kit this aircraft without any structural changes or omissions from the original. It is strut for strut, part for part almost identical with the original, as near as kit pre-fabrication will permit. In addition, special attention has been given to wood selection and grading. We hope to see these Talon kits in active competition for years to come, and hope you'll keep us posted on your contest successes with them.

CONSTRUCTION: THE KIT: Study the contents carefully, examine the wood, and familiarize yourself with the plan and general construction of the aircraft. Clear the workbench with a shovel, broom or brush, and layout your materials for wing, fuselage, tail etc in various piles. Remove all die-cuts from the sheets carefully, helping with a razor if necessary here and there on the ply. Trim and sand any rough spots smooth, and group parts for the wing, stab etc.

STABILIZER: 1/8 thick die cut stab trailing edge section S-12 and 3/32 thick stab trailing edge parts S-13 should be test fitted, given a thin film of cement to fill the wood pores, then permanently cemented together. Wipe excess cement off, then position over the plan layout, and pin flat before the cement hardens. S-12 being a trifle thicker should project above the S-13 pieces, which will allow you to trim it to proper airfoil later on.

Experienced builders may prefer to taper the trailing edge before further assembly, carefully planing to a flat taper with a sharp razor, model knife and sanding block. If you feel uneasy about this, wait until the stab is fully assembled, then use the rib sections as a visible guide in fairing in the trailing edge to airfoil. Just a little more unwieldy to handle, but easier to visualize the angles to taper. The airfoils toward the tip will require slight changes in the degree of trailing edge taper, but this becomes obvious as you proceed.

Block up the front edge of the trailing edge, (S-13, S-12, S-13) as indi-cated on the plan to meet the airfoil. Stab ribs S-1 thru S-11 are now in-stalled, carefully cemented and fitted into the trailing edge notches. A poor fit here means a bump in the covering unless sanded off, and that is no solution, as it then will be undercut on the opposite surface. You can't build Nordics carelessly.

Cement tip pieces S-14 in position, then bend and cement three laminations of 1/16 x 3/16 strip provided for the leading edge. If this was formed of one piece, bent as it is, it would be most difficult to install, and create serious warping problems due to the unequal stresses created. By laminating the leading edge, as the cement dries, it forever holds the wood in this same position, attached or not to the structure. Cement the three strips together, wipe free of excess cement, and install before the cement has time to set, pinning in position along its length.

S-1A false ribs, and top spars are now added. These are 1/16 sq and 1/16 x 1/8. While the stab structure is still pinned down, all 1/16 sq diagonals must be cemented in place. Take care to make each a good fit, not too tight, not too loose. These stress against warping, and are particularly important on elliptical configurations such as this. Allow the stab to dry at least overnight before removing from the plan. Install the bottom 1/16 x 1/8 spar and triangular center fillet etc. Clean up excess cement, trim and sand the stab to final airfoil etc, ready for covering.

WING PANELS: Due to the 80 inch span, Nordic wings are often made in plug-in halves as on this design. It is clean, neat and practical, with two lengths of 1/8 tubing installed in plywood ribs. 1/32 music wire extending from the fuselage slips into the tubing, positioning the wings. Simple, easy, and lessens crash damage, as it is free to flex to a degree.

Start with the inboard main panels. These should be positioned over the plan, with the rear edge tight against the plan, and the front edge blocked up 7/32. Install all balsa ribs at this point, carefully cementing and aligning into the blocked-up trailing edge tapered stock. There are 16 ply ribs in all. Two will attach to the fuselage, leaving 14 on the wing. (7 on each center panel. One long one along the edge where it mates with the fuselage, and six more following it to support the tubing..."

Quote: "Steve and Mary, Please find included PDF of Reid Simpson Talon, kitted by Jetco. I built this kit in 1967. It has always been one of my favorites. Reid and Roger Simpson were very active in the late 50’s and 60’s when they were actively competing, while serving in the USAF. Larry Jolly" 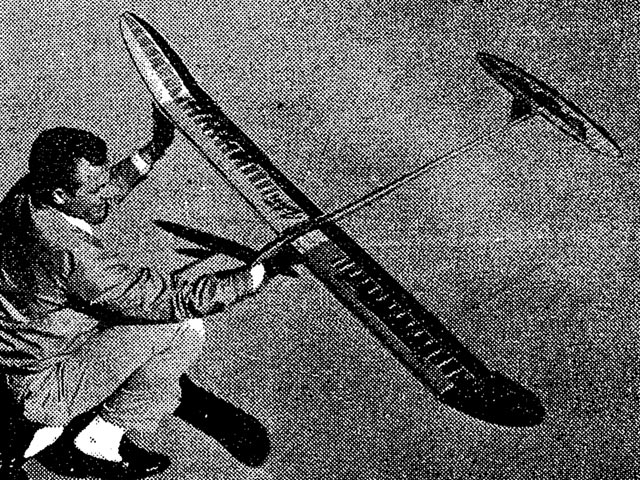