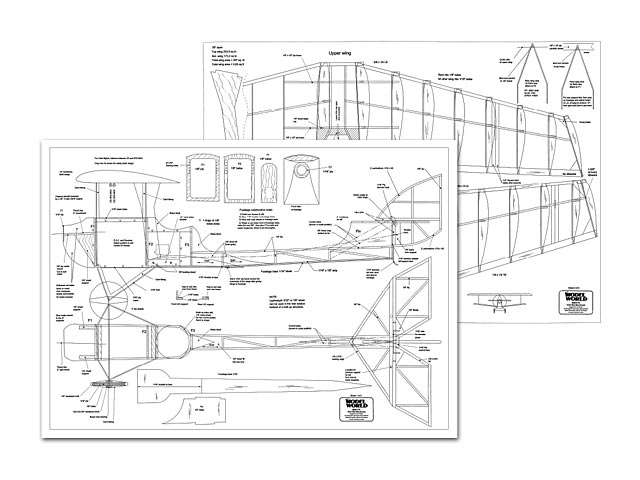 As I sat reading my tattered, December 1919 edition of Aerial Age Weekly it was easy for me to transport myself back to the year in which it was published. Fully absorbed in the article about the new Hild-Marshonet, I pictured myself sitting thinking, I need one of these! After all, look at all its great features; it has a swept back upper wing with no dihedral, a swept forward lower wing with 6 degrees of dihedral, and the wing beams are of spruce beam section and are of 'A' formation resulting in great strength and stiffness. A twin-cylinder 20 hp motor - wow! And all backed with 10 years of aeroplane engineering! And not only that - it looks great too!

Back in today's world it is apparent that all those great features ended up not being so great after all. Hild-Marshonet didn't make it into the aviation history books and most of the features it has aren't seen in aircraft today - at least not all in one aeroplane.

So, like any other obscure aircraft what do you do if you want to see a Hild-Marshonet in the air? You build a model of course! You'll find that if you build this model, despite its 'ungainly' look, it is a nice stable, easy handling model to fly. It certainly looks different and will attract plenty of attention at the flying field, as Tim Hooper has found out.

The only information I had to work from when designing this model was the article previously mentioned which had a tiny 3- view drawing, a couple of blurry pictures, and a written description of the prototype. This is all I needed to make a model, which would look right, though not strictly scale. Some liberties had to be taken in regard to structure and colour, but overall the final model gives the right look and feel of the era.

In 2003 I built and flew the original model then posted some photos into the scale forum. It was there that Tim first saw it and prodded me to get a copy of the plans to him. The results of his work you can see here.

Equipment: An inexpensive speed 400 'can' motor will provide adequate power, working through a 2.33:1 gearbox swinging a 10 x 6 electric prop. Two Mini 9g servos (rudder and elevator) are perfect for this size of model (three if you choose a glow or diesel engine as one is needed for the throttle). An electronic speed controller is also a requirement. 14 to 18 Amp types are more than adequate and any brand around that rating will work. I used a Jeti. A lightweight receiver is necessary to control all this. All the popular radio equipment manufacturers make one. I'm still using a 20-year-old Futaba Conquest transmitter with a new Hitec 555 receiver, a set up that's proved itself reliable many times over.

A good 7-cell pack of 500AR NiCads works well, or an 8-cell pack of 1100 NiMH. I'm sure a 7.4 volt LiPo pack would work too, saving weight and increasing flight times, but having no experience with that type of cell, I'm not qualified to give advice. There are plenty of people around that can help if that's the way you want to go. Tim chose a Graupner Speed 400 with a Mini-Olympus 2.33:1 belt-drive for his version. The nice thing about the Mini-Olympus belt drive is it gives off a nice 'rattly' sound in flight, which seems very appropriate for this plane. In fact one of Tim's flying mates mentioned, as Tim did a low fly-by that the tappets on his engine needed adjusting!

Construction: Let's start with the fuselage. As with everything on this aircraft, the fuselage is a little different in that it is a sort of 'pod and boom' affair. It basically has a box in the pod that houses the motor, pilot, and radio gear, and a long 'boom' used to hold the tail assembly in the right place.

So, first cut out the formers F1, F2 and F3, two sides, and the fuselage base and doubler. Next, over the plan, build two rear sides making sure that you use 1/8 x 1/16 on the lower longeron. When these have dried thoroughly, glue them vertically to the base. However, whilst those are drying, bend the wires for the cabanes, then bind and cement them to F1 and F2.

This is where the assembly process is a little different than normal. Pin down (or weight down) the front portion of the base, then slide a piece of scrap wood under the rear portion until the point at the rear is 5/8" above the surface. When that looks good, glue F3 in position ensuring it is perpendicular to the front portion of the base. Add the sides, F1, F2, and the sheet fill areas. Be sure that the cabanes line up squarely to the fuselage. Allow to dry thoroughly before lifting from the building surface.

Now add the motor mount making sure you have a couple of degrees of down thrust and a couple of degrees right. Build up the cowl with sheet or block balsa and sand to shape. You may want to make the cowl removable for access to your equipment as Tim did. On my model the cowl was fixed in place and I accessed everything from a hatch in the bottom of the fuselage. When that's complete it's time to turn our attention to the undercarriage.

Bend the front and rear wires as shown on the plan then bind and solder it all together. Before binding and cementing the assembly to the fuselage however, it is best to cover that part of the fuselage with your chosen covering material. It makes for a much better looking finish than trying to do it later..." 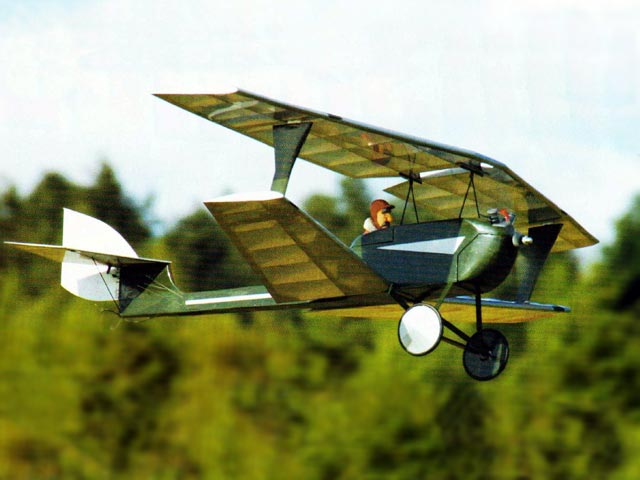 Mini Olympus is a gear drive unit. Rattly sound is from the pinion gear set screws.. when ineptly overtightened.
dan - 15/09/2021
Hello Mary, Steve... with this plan, there is now on Oz a total of 55 plans from Radio Control Model World. However, 46 are under the RC Model World tag, 4 are under the R/C Model World tag (notice the slash between R and C), and 5 plans under RCMW. For the sake of assuring that all the plans come up on searches by this specific publisher, maybe it would be nice to consolidate all of this plans under one singular tag. Sorry for using the "comments" facility to suggest this, but given that this affects various plans, I couldn't think of a better venue.
RC Yeager - 15/09/2021
Ok, will take a look at this and sort it out. Good feedback, thanks.
SteveWMD - 15/09/2021
Ok, have set these all as "RC Model World", for now. Total 55 plans. Done.
SteveWMD - 16/09/2021
Add a comment