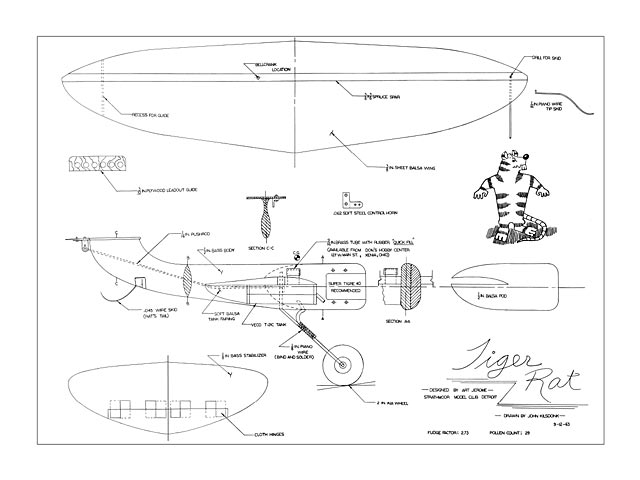 Quote: "Tiger Rat, by Art Jerome. Tiger Rat looks and is different than most conventional rat racers. Its simple and rugged construction gives a fast and maneuverable rat capable of taking hard punishment, and coming back for more. The monowheel landing-gear eliminates the tendency of other short span planes to torque on take-off. The side mounted engine combines fast restarts with ease of construction.

To build the Tiger Rat, first glue the spar and wing panels together, After the glue has thoroughly dried, plane the wing down to the airfoil in the plan. Cut out the fuselage and shape to the cross-section in the plan, making certain to leave enough thickness to support the stab. Drill the motor mounts to suit your engine, and shape the balsa pod to clear the crankcase and shape down to a streamlined front. Now cut out the stab, also the elevator, and hinge them. They should move back and forth very smoothly.

Now that all the major parts are made, the wing can be slipped into the fuselage slot, and the hole drilled for the LG wire. This hole should extend through the fuselage and spar, locking them solidly in place. Mount the stab to the fuselage, making a good sturdy joint. After the wing and stab are in place, mount the modified Veco tank on the outside of the wing and against the fuselage. Add the hollowed-out balsa fairing behind the tank, and reglue all major joints. Solidly glue the balsa pod in place after adding the blind mounting nuts. Mount the landing-gear, also its brace. Fiber-glass the entire engine-mount and wing-joint, giving the plane added strength.

After the fiber-glass has hardened, drill both the bellcrank hole and hole for the tip skid. Add the control system, using only solid lead-outs and check for smoothness in operation. After the bellcra.nk is in position make the lead-out guide, containing several holes. These holes will adjust the angle of the lead-outs. Glue in place the lead-out guide, and tail skid. Finish the completed model as desired. Use 2 in or 1-1/2 in K&B speed wheels, depending on the type of flying surface. Adjust the controls to give 45 degrees elevator movement up and down.

You are now ready to fly your Tiger Rat!"