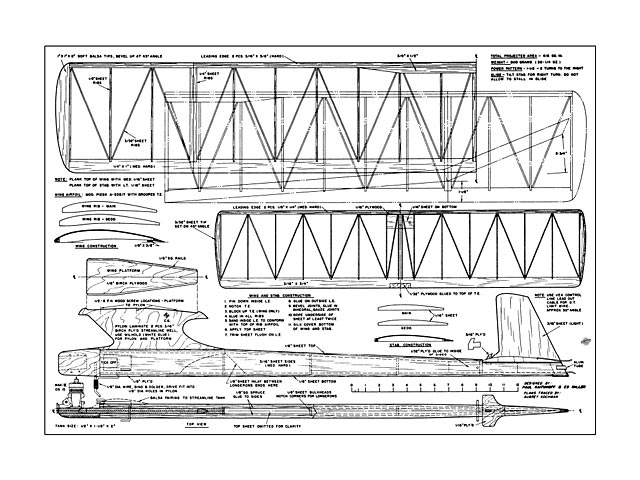 Quote: "Hailed as one of the world's best free flight designs at the International Championships! Texan FAI-Ton, by Ed Miller and Paul Kaitukoff

The Texan FAI-Ton is our attempt to achieve a rugged, all weather aircraft and still have a maximun climb and glide. There are many years of designing, building, and flying behind this model.

The original FAI-Ton was designed by Paul Kaitukoff to meet the requirements for a clean, rugged, functional F.A.I. power model.

The design proved to be highly successful, and earned a place on the 1959 US power team. However, it was not flown in international competition, because no FAI finals were held in 1959. So the design went through another year of modification and testing.

The Texan FAI-Ton evolved when Ed Miller combined his Texan with the FAI-Ton. The composite benefitted from larger wing area, top rudder, improved stressing and streamlining.

The Texan FAI-Ton was as successful as its predecessor in making the US power team. In the 1960 international competition in Cranfield, England, it scored five max's and helped earn second place for the American team. Much has been said about three minute and five minute airplanes. Rather than get involved in a discussion of such planes, we will say only this: The Texan FAI-Ton has the potential.

Much of it depends on you, the builder, on how well you build and trim the ship. The rest depends on how wild an engine is in the nose. Oh, yes, don't forget the weather has a bearing on this, too! We have compiled a brief performance record on the two variations of this model. The data represents flights in official competition under FAI rules with prop stop at 15 seconds or less. This does not include test flights!

This gives an average of almost 81%, which could mean eight out of every ten flights would be your three minute maximums. What else can you do when holes and bad air exist?

If you're ready to try the Texan FAI-Ton, begin with the wing construction.

WING: As will be noted, there are no spars in the wing or stab. Therefore, it is necessary to select extremely firm wood for leading and trailing edges. Use medium straight grained 1/16 sheet balsa for top and firm sheet for ribs. LE is two piece. Pin down inside half of LE Notch TE and block up 1/8 inch. Glue in straight ribs only.

Glue sheets of 1/16 together before sheeting top of wing. Top of inside half of LE must be sanded to rib contour before application of sheeting. Fair all ribs with a long sanding block to assure a smooth top sheeting.

Apply glue to one edge of the sheeting, and butt against TE, trying not to get glue on ribs. Pin down sheet to about halfway up the ribs. Allow to dry.

Apply glue to top of LE Pull down sheet and pin. Allow to dry. Remove panel from plan, turn over and apply glue to both sides of straight ribs. Then glue in diagonal ribs. Glue well.

Trim sheet flush with LE. Then glue on outside half of LE When dry, sand to airfoil shape. Glue on soft balsa block tips and shape when dry.

Dihedral is installed by beveling the 1/4 inch sheet ribs to the desired angle. Pre-glue all joints and allow to dry. Now glue in dihedral. Sheet entire bottom of center section. Sand, then gauze all dihedral joints..." 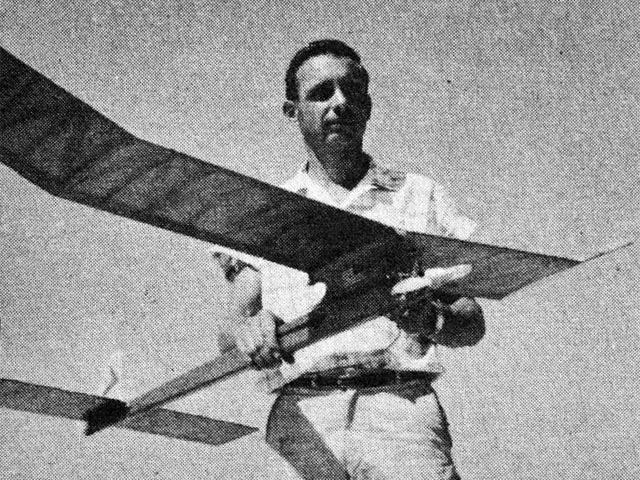