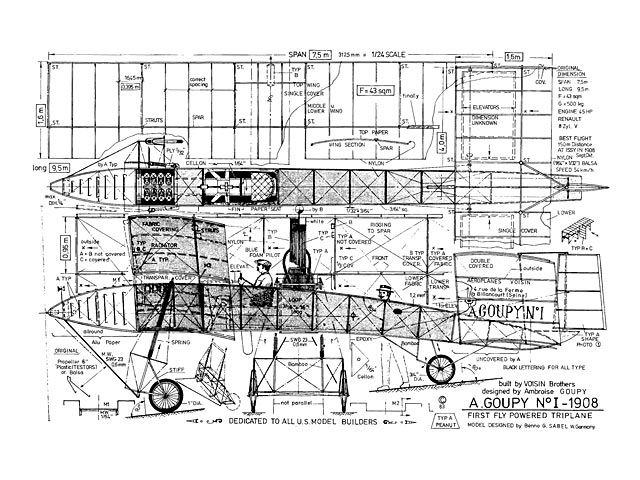 Quote: "Goupy No 1, by Benno Sabel. Here is a Peanut that you will NOT stick together for next weekend's contest - next month's maybe. But when you do get it finished, you'll have a rare and flyable conversation piece!

Benno Sabel (60) from Frankfurt, West Germany, a technical draftsman and in-dustrial constructor by profession, has been building models of planes and sailing ships for nearly 50 years.

His favorite subjects are Indoor, Wakefield, Coupe-d'Hiver, and tailess planes with rubber drive. In 1940, he designed and built a lightweight model of the ME 109 with a 12 inch wing span, which could be considered his first peanut model. From 1975 till 1979 he was the only German competitor in the Model Builder Parcel Post Proxy Peanut contest.

His professional capability for perspective drawings was of great use for his reconstruction of old pioneer planes from historic photos and old sketches.

I have designed and built this model in a 1/24 scale, based on many photographs, one three-view, and exact measurements. Goupy One had its first experimental flight at the contest in Flemalle (Belgium) in 1982. The model was first flown with the Pacific (Sleek Streek) propeller. The cross section of the rubber had been increased from 4mm2 to 9mml, now enabling the model to make short and fast flights (up to 19 sec.).

The test flights reminded me of the moderate results of the original machines (ie 150 m distance in Oct 1908, first flight of a triplane). The brothers Voisin built three machines, as can be seen in rare workshop photography. Unfortunately no photograph could show the exact size of the motor, (Four or eight cylinders, V-motor). According to description (Allen Andrews, Back to the Drawing Board) a 50 hp. 8 cylinder Renault motor is mentioned. Views of the motor show either a water cooled 4-cylinder or an air cooled 8-cylinder v-motor (information found in 1910 books).

At two contests in Belgium and West-Germany in 1983, better results were achieved with a plastic propeller from Testors. Now flights up to 34 sec and 800 revolutions (with hand-starts) were possible, although the weight of the model (25g) was rather high because I did not use special indoor balsa wood. Also, a start from the ground was now possible.

As the rear motor-peg for the rubber was too far back, more ballast was needed at the nose of the model, causing the high weight. In the MB plan, I have moved the peg a bit to the front (one space). Therefore less ballast will be needed in the front,

The rubber should be wound up according to the scheme of Alfred Genther (Switzerland), a successful peanuter who flew a non-official world record with 9 min, 4 sec in Switzerland in 1983 (Micro-X Piper). The rubber with this system is wound up in a U-guide rail outside the model.

I have shown three versions of the Goupy No 1 in my plan. Version A should be at least 9o% correct. Better or other photographs would probably eliminate any doubt. Benno Sabel West Germany." 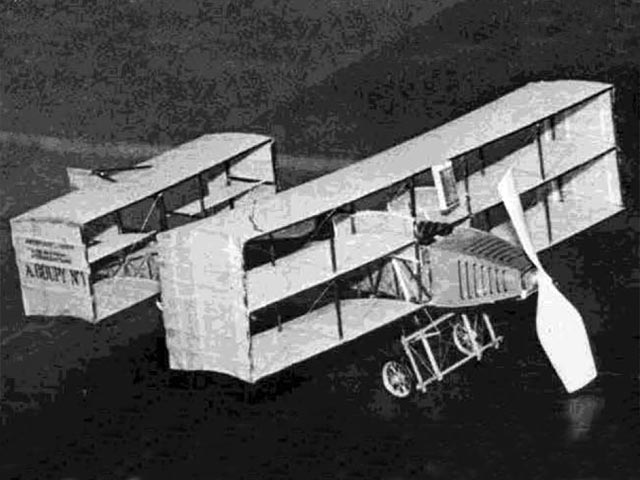 Three peanuts in one ! A triple thank you for this 40 year old masterpiece, Jan, I expect that with all this rigging this will be quite a seamstress job :-)
Miguel - 12/09/2021
Miguel, perhaps you can borrow Neal's spider.
Jan Novick - 12/09/2021
I did think of the eight-legged weaver but didn't believe anyone would recognize the allusion. Mea culpa: I misunderestimated the Outerzone learned following :-)
Miguel - 12/09/2021
Add a comment