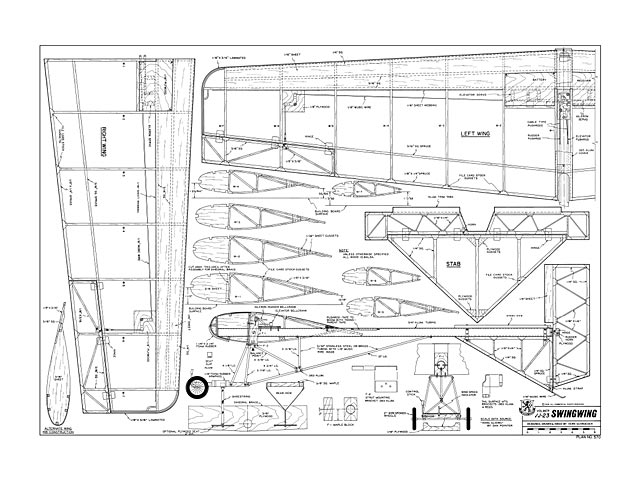 Quote: "Near the corner of National and Coronado Avenues, on the rim of Otay Mesa, south of San Diego, stands a monument, a tribute to a pioneer of human flight. The inscription reads: JOHN J MONTGOMERY made man's first controlled winged flights from this hilltop in August 1882. He had flown some 603 feet and accomplished what others had dreamed of for centuries, opening for all mankind the great highway of the sky. Although much work was done with gliders by such men as Otto Lilienthal of Germany, Sir George Cayley and several lesser known, Montgomery has been credited with the first completely controlled hang glider flight.

In succeeding years such notables as Wilbur and Orville Wright, Glen Curtiss, Octave Chanute, James Doolittle, Eddie Allen and the Schweizer brothers, plus many more, all began their aviation careers with hang gliding, commonly called skysurfing, or self-soaring.

Another name which has contributed significantly to the sport of skysurfing is Francis M. Rogallo. Not as a pilot, but because his kite has been developed into the most common form of hang glider in use today.

In the early nineteen hundreds, the Wright brothers spent several years experimenting with gliders until finally they added power to their latest creation, catapulting into the realm of powered flight, and pushing aside the development of skysurfing for nearly seventy years.

There was one exception, however. In 1941 a pilot named Volmer Jensen, frustrated by the Government ban of all flying within 150 miles of the California coast, built a different type of hang glider. Instead of relying on weight shifting and wing warping, he installed a full set of controls and it flew. This 100 lb biplane glider, named 'SO-LO', enabled Jensen to fly when all other aircraft were grounded. Over the next 30 years Volmer built more gliders, powered aircraft and amphibians. Today his hang gliders are among the best designed and most professionally produced available.

In 1971, to celebrate Otto Lilienthal's birthday, a successful meet was organized and the hang gliding movement has been growing ever since. It was after this meet and several consultations with Iry Culver, former Lockheed advanced aerodynamicist, that the VJ-23 Swingwing was born.

The VJ-23 is probably the most advanced hang glider design available today. It was designed and developed over a 12 month period and has hundreds of successful flights to its credit. It is the first full cantilever, fully controllable monoplane hang glider. Using a conventional control stick and control system similar to that of the Ercoupe, it can take off in a 15 mph wind, gain altitude immediately and climb above the take-off point. The Swingwing has broken all records for altitude, duration and distance at the Sand chines of El Segundo Beach. A sling type seat is provided for long flights.

The VJ-23 has a wingspan of 32 feet 7 inches, a length of 17 feet 5. inches, and weighs 100 pounds less pilot. Anyone with woodworking tools and experience can build the Swingwing in about three months spare time. It can be completely broken down so it will fit into any normal trailer. Assembly and breakdown time is approximately thirty minutes. The 16 inch thick root airfoil completely eliminates the need for external wires and braces.

The tail boom is made from a 15 foot length of 4" x .035 aluminum tubing. The cantilever wing is constructed in two sections and joined by three bolts. The leading edge is covered with 1/32" poplar plywood and the remainder of the wing is covered with lightweight doped aircraft fabric. For insured cockpit safety, in case of belly landings, the hanger structure was completely redesigned and rebuilt. The wheels are not used for landing, but are used to roll the machine back up the slope and into launching position.

A 9-to-1 glide ratio puts the Swingwing far above most of its competition on the slopes. At one recently held meet on a 7 to 1 slope, it was the only glider capable of leaving the angle of the slope.

One of the most popular self-soaring sites in Southern California is located on the beach near the take-off lanes of Los Angeles International Airport, 400 yards south of Imperial Highway. There, Volmer Jensen and his Swingwing are a familiar sight as he makes one of his famous two-step take-offs from the top of the 33 foot sand dune and soars majestically out over the 23 degree sandy slope towards the blue Pacific; often to circle and rise as much as 20 feet above the slope and land near his original take-off point.

Our model is built to a scale of 2 in = 1 ft which gives it a. wingspan of slightly over 65 in and a length of 35 in. It was designed from a 3-view drawing supplied by Volmer Aircraft of Burbank, California. Construction follows quite closely that of the original aircraft except that all structural members were beefed up considerably to compensate for some of the abuse which we figured was bound to occur during the life of the model.

The wing and tail structures are built entirely of balsa except in a few places where we felt that spruce could be used to better advantage. All wing ribs are built-up as on the full scale aircraft. This proves to be quite a time consuming job and, when finished, the wing structure is quite a sight to behold.

We definitely do not recommend this project for beginners and only an experienced builder should attempt to tackle it. As much of the detail as possible is shown on both photos and on the plans.

We will not go too much into detail, but will try to explain some of the more difficult phases of construction..." 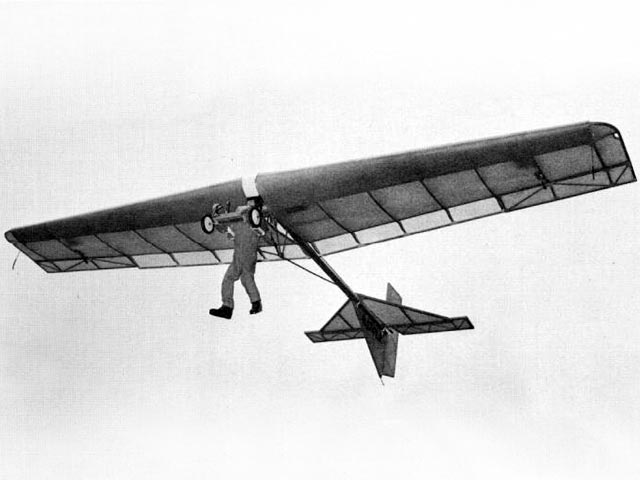 My brother was building a full-size one in the 70s but was unable to finish it due to his going on service and life took over. Coincidentally, he had a beard too but that's where the similarity ends :-)
Miguel - 11/09/2021
Its uncanny how much Volmer Jensen resembles G.I. Joe : - )
RC Yeager - 11/09/2021
Absolutely uncommon for a glider - wing profile seems to be symmetrical. Amazing.
Robert Schlickewitz - 12/09/2021
Add a comment