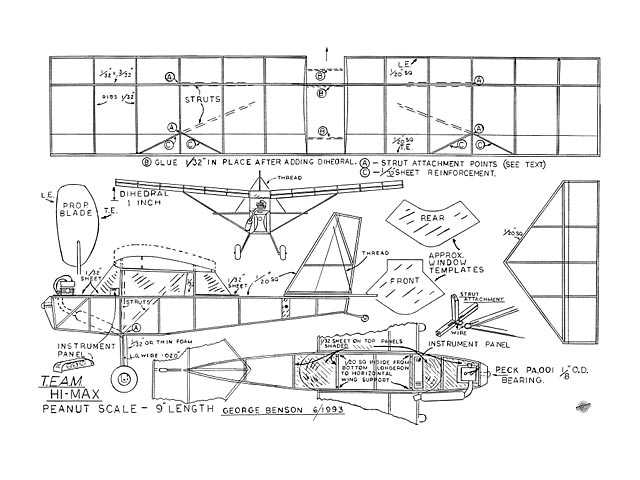 Quote: "A little model of what is in effect little more than a big model - one of a series of simple all-wood homebuilts kitted by Tennessee Engineering and Manufacturing. TEAM Hi-Max, by George Benson.

The Hi-Max homebuilt aircraft developed by TEAM of Tennessee lends itself beautifully to Peanut scale, having simple lines, a wide range of scale color schemes and detailing, various types of engines and exhausts, and last but not least, lots of wing area. This model follows MIAMA club rules, which permit an overall length from the rear of the propeller of 9 inches; in this case resulting in a wingspan of 14-3/4 inches.

The full-size Hi-Max which I modeled was built by Robert Macy of Cherryvale, Kansas. The attractive blue and white color scheme smartens up a simple rectangular design.

Construction: Standard stick-and-tissue construction is followed, so rather than give a detailed description I will elaborate only where variations from the norm are encountered.

Build the wing in one 14-3/4 inch long structure, flat on the plan with the center two ribs tilted slightly to conform to the dihedral added later. The leading edge is omitted between the two center ribs. The three B pieces of 1/32 balsa are put in later when the dihedral is added.

At C, insert shaped 1/32 balsa to stiffen the ribs where the soft wire is glued to attach the wing struts. The soft, thin copper wire is made into an eye and the two tails are glued to the ribs at two points A on each panel. 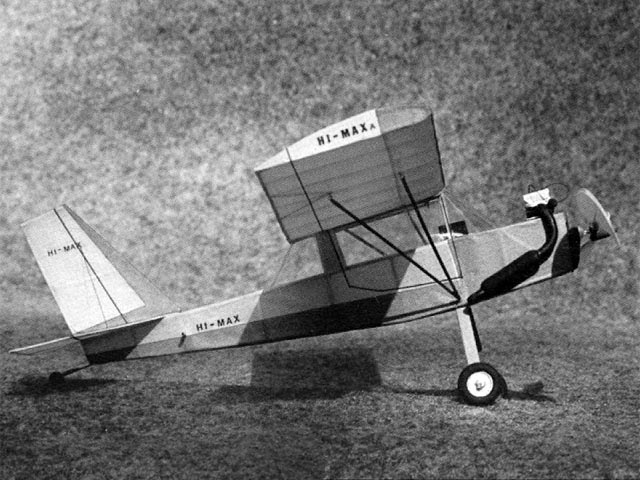