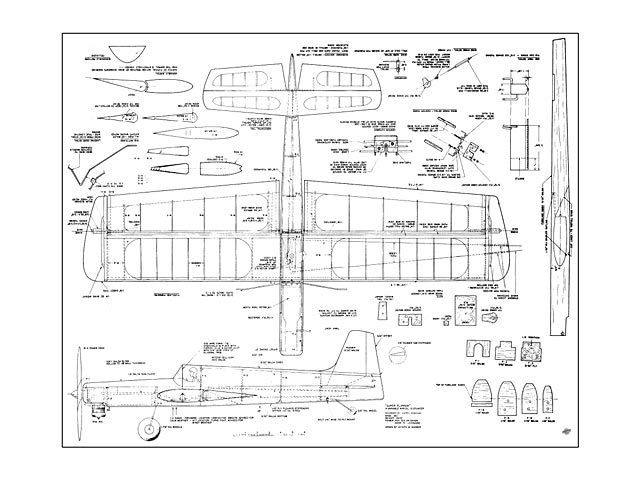 Quote: "The Super Flipper is a feasibility test model used to evaluate a somewhat different concept in stunt model design. The typical contest stunt model as we know it today uses flaps as an auxiliary lift device. This method has been tried and is a time proven concept, we will not attempt to argue against it. However, we do feel that other avenues are open to experimentation and we cannot eliminate from our thinking the possibility that other concepts that will work in stunt and perhaps show definite advantages in some areas.

Upon first glance at the photos, you will immediately notice that the wing is different. Built in two halves, the wing is split spanwise. Although the trailing half of the wing functions in a manner somewhat similar to that of a flap, we prefer not referring to it as such, but in more sophisticated manner as a device which effectively varies the airfoil of the wing.

It was a cold February when we began searching for ideas for a new stunt model to use in the Snowbird meet run by the Garden State Circle Burners MAC. Even though it is held in the rugged New Jersey winter weather, the friendly atmosphere and home-cooked food sold at this meet always make it a 'must' on our contest calender.

Having experimented with variable airfoils in the past, we recalled an unusually successful 1/2A design. Weighing five ounces the model flew through maneuvers with a smoothness usually attributed to larger models. Utilizing experimental results gained from these earlier models, work began on laying out the Super Flipper to accept a .15 size engine.

The wing and the control system are the heart of the airplane. Earlier test models have had flipper area equal to as much as 60% of the total wing area. It was decided to divide the wing span-wise at a point just beyond 50% of the mean chord. By virtue of the airfoil shape, this will allow some under camber when the flipper is actuated.

The pivot axis is geometrically located as to allow the rounded leading edge of the flipper to rotate in a manner that will add to or detract from the fore and aft distance that air has to travel over the wing surface when control is actuated. When the flipper is actuated downward, a portion of its lower leading edge moves up into the concave section of the stationary wing, thereby detracting from the fore and aft length measured over the lower wing surface. The opposite effect is had on the top surface. Study plans to clarify this point. Having increased the distance that air has to travel over the top surface of the wing, its velocity is increased creating a lower pressure area on the top wing, surface, hence lift.

The proper relative angle of movement of the big flipper with respect to the elevators is effected by many factors and has a definite relation to the flying characteristics of the model. In calm air the set-up shown will give you a smooth flying model with big ship handling characteristics. Good square maneuvers will be easy on the model as well as on the flier. In connection with this, please note that the plans show two CG locations. The foreward location will yield a smoother flying model and is advised for calm air conditions. As the wind tends to carry the model towards the earth during maneuvers, more reserve turning capability is needed in windy weather. The aft CG location is advised for windy conditions.

Weighing in at 19 ozs., a Fox .15X engine proved more than adequate in the original model. With Fox Superfuel, a mild fuel, the engine could be set slightly rich and still breeze through a smooth AMA stunt pattern at a steady slow pace. An 8-5 Power prop was used on the orginal with 52-1/2 feet of .010 diameter lines.

But let's get back to the Snowbird meet. The model was finished about 3:30 P.M. the day before the meet and test-flown in a bitter cold and biting wind on a snow-covered field. After several flights, we terminated our test flying for several reasons: a strong wind, fear of landing in a footprint and tearing the Jap tissue covering and - I was COLD. Although too windy to do a full stunt pattern with the small model, we learned that the airplane flew and that Super-fuel would run the .15X satisfactorily.

The day of the meet was cold but the wind had subsided. Because of the calm air, the engine was set rich for a slow pattern. Being over-rich caused difficulty with slacked lines on overhead maneuvers. Results put the Super Flipper in sixth place which is certainly nothing to rave about but I would like to use it as an indication that the model is at least capable of performing a resonable stunt pattern. Considering that it was the first time that the full pattern had been performed with the new model, I was satisfied with both the model and judging.

Now the big question. Is the model really capable of competing against its bigger brothers powered by .35s? In general, the answer would have to be 'No.' However, I believe that it could compete in the average area contest if there were very little or no wind. My negative answer was given as we very seldom if ever have a 'no wind' condition at any contest. Comparing a 19 oz, 25-inch long, .15 stunter with a 45 oz, 40-inch long .35 job is similar to compare a rowboat with the Queen Mary (Well! almost) so far as rough weather effects are concerned. Considering the degree of success achieVed with so few test models, I feel that further experimentation with this concept can be rewarding and interesting.

With the exception of the hinge system, the general structure of the model is somewhat routine. As usual, choose wood wisely as it has a definite effect on how well your model will fly. First, build the stationary wing and flipper segments. Carve the hollow in the trailing edge of stationary wing using an X-Acto gouge and finish with sandpaper wrapped around a dowel. Do not hollow center segment of wing as this must be flat to accept the 3/16 ply center hinge mount. Add the bellcrank, 1/8 sheet tips and 1/16 sheeting. Later, add the brass tip hinge assembly... " 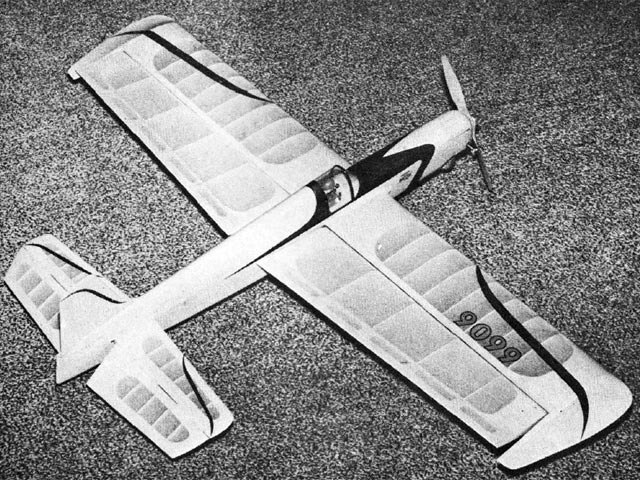