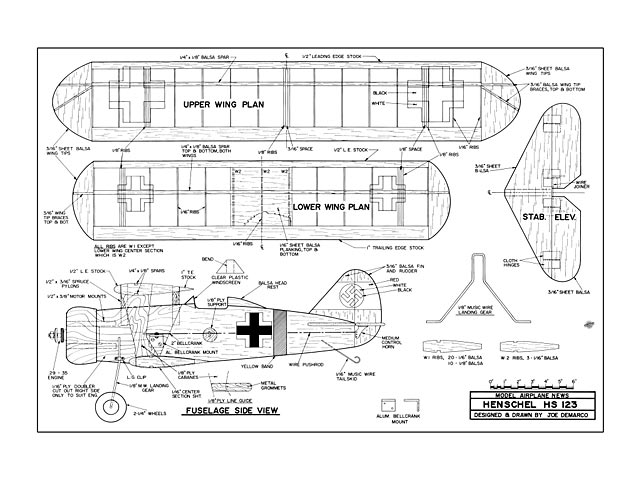 Quote: "HENSCHEL 118 123 by Joe DeMarco A 1930s German biplane in profile form for those of us with limited time who want a scale look; a great flying CL project.

I have, as all of us have, a few planes that are favorites. No matter what hobbies I get interested in or projects that turn me away from airplanes for a while, when I return, these old favorites still remain favorites. They seem to have an enduring appeal that causes some excitement whenever they come to mind.

Many of these planes have turned out as profile models because a lack of time prohibits full scale projects. Even though they lack some depth, they still have special charm. My favorites, to name a few, include the Douglas Dauntless, the Grumman Bearcat and Panther, the Boeing F-4B, and of course, the Henschel Hs 123, to which this article is dedicated.

The Henschel Hs 123 made its debut as an experimental biplane on 8 May 1935, flown by the renowned Ernst Udet. By the summer of 1935, three had been built and tested; two crashed and were destroyed. A fourth was then constructed with all the kinks worked out and it proved to be very satisfactory. By 1936, full production had started and delivery was made to the Luftwaffe. Five aircraft were sent to Spain by the spring of 1937 for testing under battle conditions by the Condor Legion.

In 1939, the Hs 123 was considered obsolete by world standards, but it continued to prove itself in Poland and France, and in the early stages of the Russian Campaign. Its greatest use, and best success, was in the role of ground attack work. Strangely enough, it continued in front line duties until mid-1944; quite a feat for an obsolete biplane whose production had ceased in 1940. It had even been suggested in 1943 that production be resumed to resupply depleted squadrons that badly needed the plane to continue in the Russian front where other aircraft showed serious shortcomings.

The Hs 123 owed its long life to its toughness and reliability. My Hs 123 also proved itself to be tough and reliable. Once, while flying inverted, it suddenly lost its engine. I don't mean that the engine quit running - it quit the plane and hurtled through the air. Thank goodness it landed without damaging itself, or any spectators, in a grass field (the plane was being flown over a macadam parking lot). After the aircraft lost its engine it was, of course, badly out of balance and appeared to be doomed. But no - its large elevator managed to keep its nose up enough to skid in on its top wing and rudder. The only damage was a half inch ground off the rudder, which was easily replaced.

I believe that you will find building the Hs 123 as easy as 1-2-3. Keep in mind a few simple tips: First, do all your gluing with aliphatic resin. Second, do all of your straight wood cutting along a metal straightedge. A jigsaw works wonders with any curved cuts. I have a Dremel which I find indispensable.

Start by cutting out the fuselage profile from 1/2 in balsa. A perfectly straight piece of medium to soft sheet will do nicely. A little care in laying out the wood will get the best mileage from either 3 in or 4 in butt-joined stock. Next cut out the stabilizer slot at 0° incidence, followed by the slot for the slower wing..." 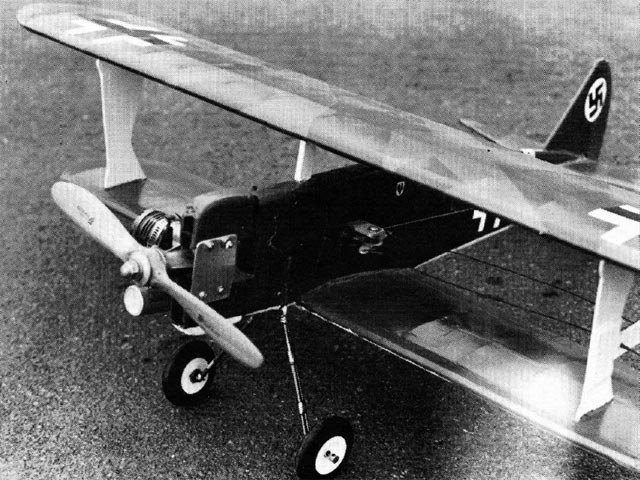