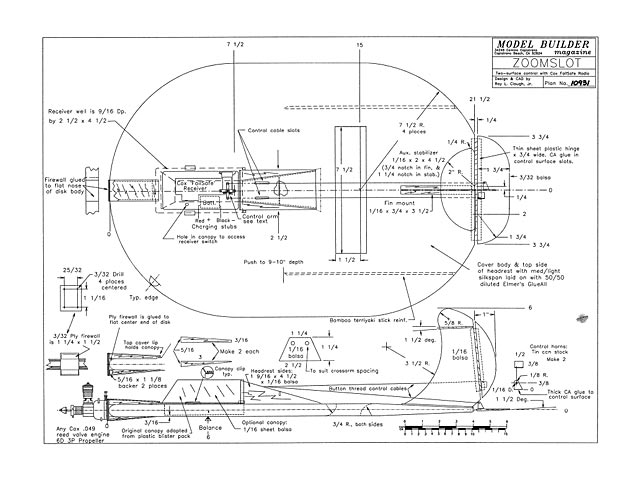 Note Zoomslot and Minislot both appeared in the same article in MB, Oct 1993.

Quote: "Not one but two great flying modern versions of the author's famous 'slot saucer' of the 1950s.

Zoomslot. A slab of foam, a single-channel Cox FailSafe radio and a reed-valve .049 are all that's needed to experience the thrills this strange flying machine can provide.

With a thrust-to-weight ratio near unity and abetted by a unique two-control surface hookup of the Cox FailSafe receiver, this latest version of my classic slot saucer design is a real mover and shaker.

From a hand launch this hotdogger will burn around in a low circle like a ukie, roll out of its launch pattern in the opposite direction with a touch of rudder and scream skyward in startling 200-foot zooms at the flick of its elevator.

Consecutive loops require no practice; wingovers, Immelmans and snap rolls require just a little. When the power quits, Zoomslot glides surprisingly flat and can be aimed to land where you want it with a neat little elevator flare on touchdown.

It would be difficult to imagine a simpler RC flying machine. The body/wing/fuselage is shaped from a slab of 3/4-inch thick bubble foam packing. (You could substitute pink builder's insulation foam, which is only slightly heavier.) Three-quarters of a sheet of 1/16 or 3/32 medium-soft balsa and a scrap of 3/32 ply covers the wood inventory. Medium or lightweight silkspan laid on with 50/50 diluted Elmer's GlueAll covers all.

The molded-looking canopy came from a blister packaged tube of plastic rubber. Use something similar or make a sheet balsa hatch to cover the radio recess. Sheet acetate or Mylar drafting film is used for the self-centering hinges of the fin and rudder. The elevator is deli tray foam. For power I used an old Cox reed-valve .049 with a 6x3 prop.

The Cox FailSafe radio system makes all this simplicity possible. It is light in weight, positive in action and can be bashed to do much more than it was designed to do. I added a toggle switch to jump the transmitter's timing capacitor so that I can disarm the transmitter's failsafe function if needed.

The receiver is powered with four 72- mAH NiCds stripped out of a
9-volt re-chargeable transistor battery to save the weight of the battery holder and bother of replacing AAA cells. An even better choice would be four 110-mAH Sanyo cells for more flights between charges. The battery pack is recharged through two red and black wire stubs until perceptibly warm .to the touch.

You'll need a new servo arm to operate the two-surface control system. Not having a spline-compatible Airtronics arm handy, added a Futaba 5133 4-prong arm using a 3-48 machine screw to replace the self-tapper. The Futaba arm sits on top of the Cox arm with an external prong star washer between them.

(Do not leave out the star washer if you use the Futaba arm. During my early experiments I decided that friction between the plastic parts would be enough to handle control loads and still allow enough slip to tweak in final adjustments. The fallacy of this notion is documented on a few seconds of videotape showing a spectacular 200-foot zoom followed by an equally spectacular 200-foot dive. Luckily, Zoomslot proved quite easy to repair. Foam excels at absorbing impacts.)

Construction details should be clear from the plans, but a word on working the foam might be helpful. Bring it as close to shape as possible with sharp razor blades and finish it off with 200-grit sandpaper, delicately applied. Be sure to push the reinforcing bamboo teriyaki skewers into both sides (rotating while pushing) to strengthen the slot area. Don't try to cover them with glue, even Elmer's, and push them in place before it dries. You may find yourself snapping off seized sticks and trying again, and besides, the friction and grab of the foam makes glue unnecessary.

Use silkspan for covering, laid on with 50/ 30 diluted white glue, but use UFO thick CA for all assembly. I used Red Devil water-based latex for paint and trim and have had no problems. Do not decide that once the surface is sealed you can use fuelproof dope. Solvent fumes will permeate the silkspan covering and collapse the foam underneath.

Self-centering elevator and rudder hinges are thin Mylar or acetate. The elevator's center position is slanted 1-1/2 degrees up by inserting its hinges into the foam body at an angle.

Mount the Cox FailSafe receiver with a few dabs of hot-melt adhesive on the corners. Control horns are made from tin can metal stuck on with CA. Control cables are black button thread. (Pushrods won't work with this split-control setup because the inactive side must slack off.)The thread hookup need not be violin-string tight, just free of appreciable slack.

Control moves are: Pushing the fight-hand button moves the rudder to the right. Torque effect is your left rudder under power. Pushing the left-hand button lifts the elevator. Flight trim is fairly important (by fairly, I mean that if you blow it you can probably white-knuckle the model down under some semblance of control but good trim gives you more elegant operation). The saucer is assumed to be absolutely flat and symmetrical. Thrust line is dead nuts zero - no offset of any kind. Same for the fin/rudder setup. In addition to the built-in up elevator, a small negatively angled auxiliary stabilizer on the vertical fin helps provide a recovery reflex for the otherwise symmetrical wing section.

Balance point is fine-tuned by moving the battery back and forth before sticking it down with a couple dabs of hot-melt glue. Test glide the model over tall grass if possible; it should shoot out fairly fast from a strong heave with just a suggestion of nose-up mushing.

The flight mode is to lean out the engine and hand launch about 10-15 degrees nose up. Zoornslot should move out rapidly and bank into a left-hand turn under the influence of torque. All things being equal, you should get a fast circling flight with a very gradual increase in altitude. Very brief touches of right rudder will ease the nose out of the circle into a shallow climb. Holding the elevator button briefly will produce a near-vertical zoom.

Climb is stopped by right rudder blips to bring the nose down. Holding rudder will produce a screaming spiral from which a punch on the elevator button will bring instant recovery. The elevator is very responsive and the model loops spectacularly fast. Wingovers and snaps come from nosing up vertically or a little past vertical and then hitting the rudder.

When the power quits the trick is to aim the model where you want it to land using a rudder that moves only to the right. It's fairly easy once you learn where to get off the rudder. Give Zoomslot full elevator a couple of feet off the ground and it will flare nicely to a soft landing." 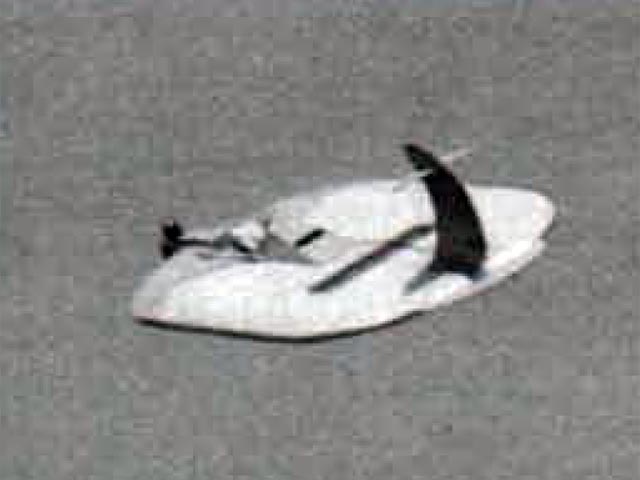