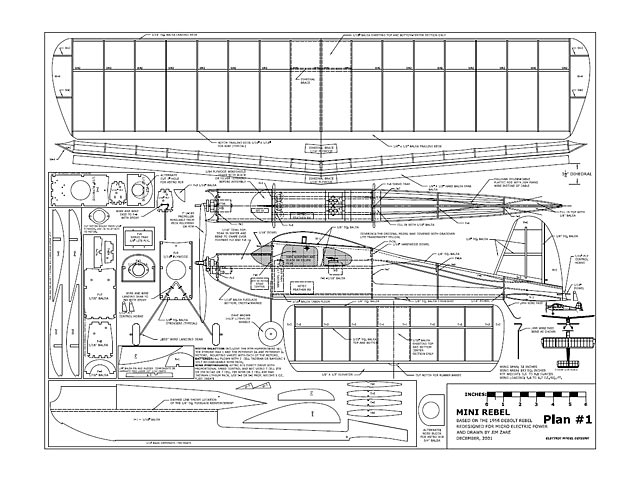 The original Live Wire Rebel (oz5553) was a single channel design by Hal DeBolt, kitted by DMECO in 1955. This here is a later version, redesigned for electric power.

Quote: "You mentioned your desire to build a smaller version of the Rebel. In 2001 I created a 2/3 version with a span of 32 in. I will attach a full size pdf of that plan called a Mini Rebel.

It was built and flown with a MTM (Mikes Tiny Models from Germany) Hummingbird motor and Tadiran lipos from Israel. The Tadirans were the first Lipos I ever used. Note this is the era before brushless outrunners.

The model was designed for golf domes, backyards and parks. It weighed about 7.5 ounces with this equipment and the RC gear of the time. It was a bit underpowered as I recall. I later added a nose block and flew it with an Astro 010 brushless motor. It flew well but was a bit fast for indoor flying.

A couple of years ago I cut off the Astro 010 nose block and mounted and Eflite Park 250 in the Mini Rebel. I fly it with a 2S 250 pack. It weighs 6.75 ounces with a wing loading of a mere 5 ounces per square foot. I hadn’t flown it for over a year. Yesterday I took it to a local park for a few flights. I did install a magnetic hatch at the bottom front for battery exchange. It is a piece of 1/64 ply.

It flies similarly to the original size Rebel. It gets buffeted a little more in the wind, but all in all it is a nice sport model. It will easily ROG from pavement or picnic tables. It loops repeatedly without any problem but since I used the original rudder configuration rudder rolls are more difficult. If I built one again it would enlarge the rudder area. Flight times are about 7 minutes with the 250 pack. It will also take a 450 pack. I’ll try one on the next outing.

The parts are laid out by size on the plan. It should be easy to bandsaw parts and scratch build. Some people have been able to laser cut from PDFs. I am not sure what is involved. 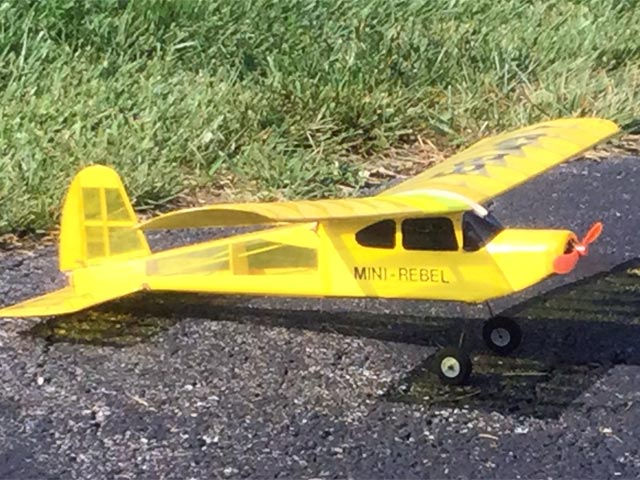