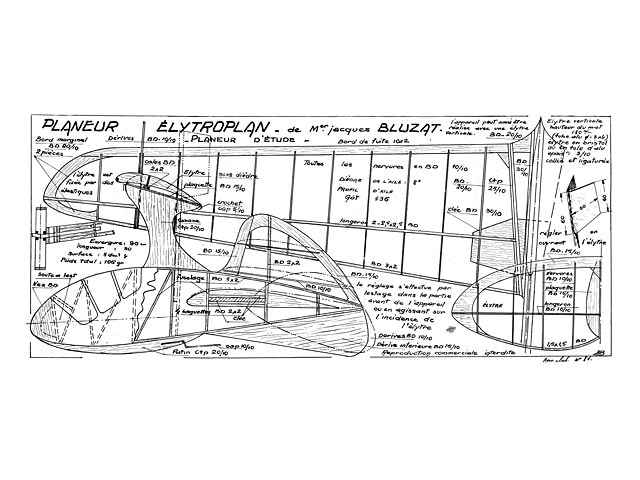 Is there any chance of supplying the article for this so unconventional aircraft? :-)
Miguel - 30/08/2021
Is it a tandem or a canard? Or in between?
Robert Schlickewitz - 30/08/2021
What an interesting design! I suspect that the small, undercambered upper wing mounted on a pod acts as a stabilizer. The main airfoil looks very close to a Clark 'Y' which on a flying wing would not be stable (possibly pitching over tendency's due to the non stable center of pressure). My feeling is that the undercambered stabilizer would cancel out this pitching tendency but at the cost of added drag. I imagine a reflexed main airfoil would negate the need for the stabilizer. However, it looks like an interesting design to build and experiment with and would look quite different in the air....... oh another model to build !! Does anyone know what year it was designed??
Mark Stanley - 31/08/2021
The Elytroplan would be the first "T" tail plane in aviation history. It was developed by Charles de Rougé. Assigned as a pilot in the Verdun sector during the First World War, it was at this time that he became aware of a problem that would direct all his future research: the stability of the aircraft. It was in 1930 that he patented what is commonly called the "T" tail, or more technically the elytroplane. Wind tunnel and flight tests will demonstrate that this invention provides devices with incomparable stability. One invention greatly improved the aerodynamic behavior of aircraft because the beginnings of aviation and even into the 1930s were synonymous with very frequent accidents, often as a result of wing turbulence applied to the elevators of aircraft. Charles de Rougé knew how to apply to aircraft what Nature developed over time. Thus, the Elytroplan was born. Apart from the elytron we also owe him the invention of the T-tail, well known today on airplanes of all types and on gliders, but that's not all because since 1940, thanks to him, France might also have had a guided anti-tank missile which would later be known as SS 10 then SS 11 ENTAC. Exceptional!
Olivier - 31/08/2021
Thank you, Olivier, I had no idea, exceptional indeed! So this is a T-tail canard!
Mark, the plan says the main wing airfoil is a Göttingen 436, it's right in the middle of the plan where it says "profil d'aile Göt. 436", you'll find it at http://airfoiltools.com/airfoil/details?airfoil=goe436-il . This appears to be somewhat iffy at low Reynolds numbers, but then what isn't? :-))
There's another Rougé feature mentioned in this plan, a vertical elytron on top of a 180mm mast, see the sketch on the right with what looks like a pair of opened flaps, this is why I wrote I'd like to see an article or photos. I know I've seen this before elsewhere, so I may come back to this odd contraption later.
Miguel - 31/08/2021
The plans I have in my possession date from the 1940s. That's all I could find out. To date precisely, you have to find out what journal number it might be in. You can find these journals on Ebay. From what I can see on your site, the length shots must be from the MRA journal. The format of the magazine imposing this type of plotting on a limited surface.
Olivier - 31/08/2021
Going against nature I happened to actually locate something locked in the dungeons of my memory, A Rougé Elytroplan can be found in M Cartigny's splendid website in http://www.peanut-scale.fr/a-les-cahier.... Look for issue no.75 and locate the four pages on Elytroplans. These explain the mast to perfection.
The article beginning with "... were tested, with great hopes and enthusiasm, but very little success." should be a bad omen to the wise.
Miguel - 31/08/2021
Hello Olivier, thank you for the approximate date for these plans, this is very interesting and will go on my list of models to build (haha, all modelers have a list!). Once I get onto it, I will post some photos.
Hello Miguel, thank you also for the info on the airfoil...I was way off the mark! I will take a look at the website you mentioned, it will be interesting I think. Yes, this could be a unique model. Cheers to all.
Mark Stanley - 01/09/2021
Hello everyone, What is interesting is that this plane looks like a beetle. So, I think the flight has to look like it. No, just kidding ;-) As written on the plan, it is a study... In any case, this is part of the original aircraft.... Olivier
Olivier - 01/09/2021
Have now set the date as Nov 1936, thanks to Pit.
SteveWMD - 02/09/2021
I'm having doubts about the relationship between this Elytroplan concept and what we normally call the T-Tail. For the T-tail, this will hopefully suffice: https://en.wikipedia.org/wiki/T-tail
As for the Elytroplan, I see a small number of more or less obscure references on the Net. In the main, I find:
- this Wiki page on C. de Rougé https://fr.wikipedia.org/wiki/Charles_de_Roug%C3%A9 ,
- this 2nd-hand book in Amazon with an extraordinary cover (at a good price too!), https://www.amazon.com/Elytroplans-Charles-Roug%C3%A9-a%C3%A9ronefs-extraordinaires/dp/2913788661 ,
- a discussion in the website below, very interesting and illustrated https://www.secretprojects.co.uk/threads/de-rouge-elytroplan-lateron-biplane-concept.12838/ . Not a proper T-tail in sight.
In the end, I see little connection between a conventional T-tail and this "two speed-brakes on a pole". Comically, Wikipedia says "In 1953, he ordered all French stabilizer devices at the Paris Air Show seized. Many lawsuits follows, however constructors carry on". Not a good sign.
Miguel - 02/09/2021
Add a comment