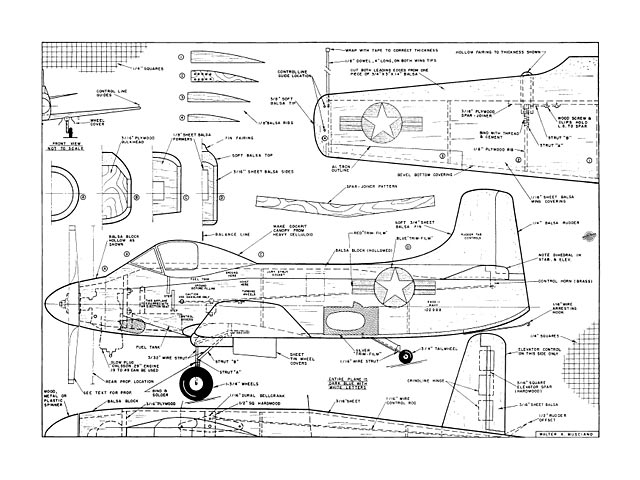 The high speed of the Douglas A2D design is so great that the standard 2000 lb bombs had to be encased in a long streamline torpedo-like shape because the plane flew faster than the greatest speed of the standard bomb shape. All performance figures are top secret; however it is known that the Skyshark carries four times as many bombs per gallon of fuel as former jet attack planes and takes off in two thirds the distance of jet fighters. The static thrust is so high that this Douglas 'brainchild' can take off from the smallest carrier, either as a fighter or bomber, with ample deck length margin.

According to EH Heinemann, Douglas chief engineer, the original idea was to merely modify the standard AD Skyraider: it soon became evident that an entirely new design had to be evolved. The main problem was to double the airplane's power without appreciably increasing the weight! The 5,500 horsepower twin Allison T-40 engines solved this problem. The powerplant is located behind and below the cockpit with the fuel tank immediately aft of the pilot. A firewall separates the tank and turbines. Air intakes are in the nose bottom behind the prop spinner while the exhaust blast emerges from the fuselage sides, aft of the wings. The powerplant is so arranged that one turbine can be shut down during flight, thereby increasing the cruising range of the A2D considerably.

The cabin is completely air-conditioned and an ejector seat is fitted. It is uncommon to see a fighting plane without the familiar bubble canopy; however it was considered necessary to use glass rather than plastic to meet hot sun, sea level and full throttle speed requirements. Double curvature glass of the type required was not available in time therefore the canopy was made as shown. Engine starting has been simplified to the point where the pilot merely pushes a button to start the turbo-prop engines. This is very important during combat preparations.

By combining high operating altitude, short take off, long range, high load carrying capacity and high speed approaching that of jet fighters, the Skyshark is particularly well suited as a carrier based attack, ground support or general purpose aircraft. Three planes are to undergo testing while ten more have already been ordered for Navy evaluation tests.

We wish to express our appreciation to Mr CG 'Chet' Miller, of the Douglas El Segundo Plant, for his kind cooperation in providing material to make this article possible.

Before we begin construction may we suggest that the A2D makes an ideal candidate for Navy Carrier Landing competition which was inaugurated at the Nationals this year. By fitting a two-speed engine control, using a Remote control handle and possibly a third line for releasing the arresting hook, brother - it's perfect! Oh, yes - for those modellers who like to indulge in the unusual, why not fit this model with contra-rotating propellers?

Now let's get started on the Navy's latest 'flying arsenal.' Select medium hard balsa for the fuselage sides but be sure that both sides are of the same texture. Cut out the bulkheads and cement the rear of the fuselage sides together and insert the bulkheads in their proper places. Apply plenty of cement. Install the engine and be sure all openings are sealed with tape. Add the bellcrank foundation and bolt the bellcrank to it. Cut the tail surfaces from medium balsa. Note that only one elevator is movable. Sand to a streamline shape and hinge the elevator to the stabilizer after the horn and spar have been added. Cement the stabilizer (both halves) to the fuselage top after the 1/16 wire control rod has been installed. Check for the correct dihedral. Install the fuel tank.

Cover the fuselage bottom and spot-cement the fuselage to and nose blocks in place. When dry carve the fuselage to shape, checking the cross-sections now and then. Sand smooth and slice the blocks off. Hollow to the approximate line shown on the plan and re-cement in place.

Cut the plywood wing joiner and ribs. Cement the rough cut leading edge to the joiner. Cement two pieces of 1/16 sheet together edge to edge, so you will be able to cut the wing covering in one sheet. Cement the bottom covering to the leading edge (one side at a time) and add the ribs.

Now bend the landing gear to shape and bind the joint with fine wire (milk bottle cap wire is ideal) and solder well. Install the landing gear by inserting it through the wing from the top. A portion of the leading edge must be cut away for this. Bind strut A to the plywood rib with strong thread and cement liberally. Strut B is screwed to the joiner by means of small clips..." 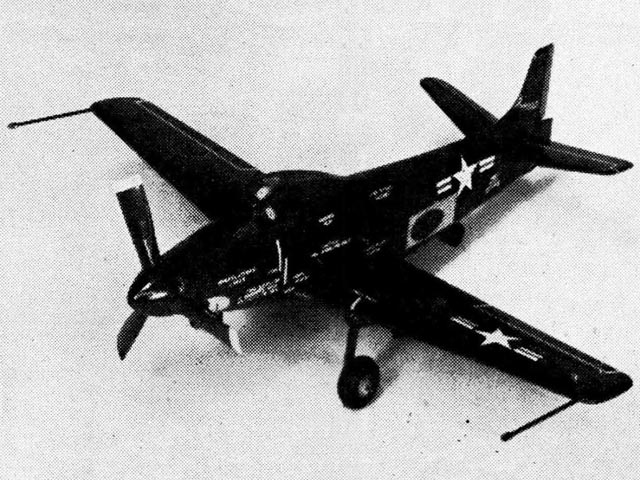