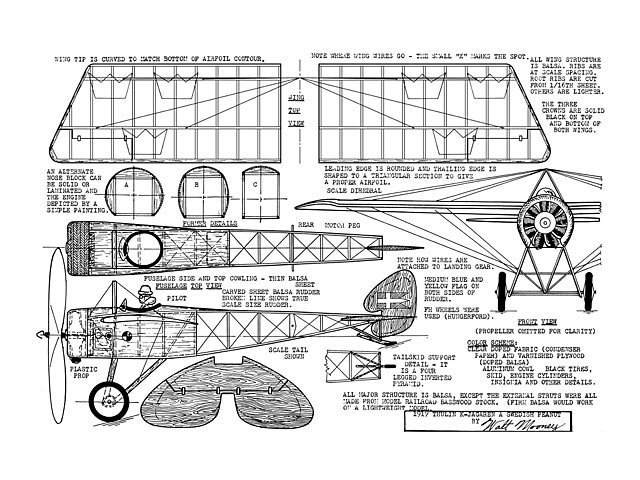 Quote: "This airplane follows a classic trend in aircraft configurations that was started by Morane before World War One, and was carried along by such famous names as Fokker, Phalz, and Siemens-Schuckert. Probably the most familiar similar airplane was the Fokker E-111. In any case, the design is not new or strange, so why build a Peanut Scale model of it?

There are several reasons that can be mentioned. First, there was an excellent 3-view of this particular aircraft drawn by Bjorn Karlstrom several years ago, that gave good documentation on structure, finish and color. Second, the Thulin K had a larger set of tail surfaces than most of the other 'lookalikes', and thus can probably be made to fly better as a model. Third, the tail surfaces were plywood covered and can thus be simply made of sheet balsa while keeping to scale type structure simulation. Fourth, the fabric was clear varnished, and a good simulation can be achieved with condenser paper covering. And fifth, the wing insignia consisted of three black crowns, easy to create out of black tissue and a nice change from black crosses or blue, white, and red circles.

This model follows the structure of the original airplane fairly closely. Sheet balsa is used wherever there was plywood sheet on the original. All ribs, spars, fuselage uprights and crosspieces are in the proper position. The tail is solid, however, and the ribs are not built up, but are simply cut from sheet. The rigid landing gear structure is made from model airplane basswood, which hopefully won't have to take up any of the landing impact loads. The wheels are carried on a wire landing gear that extends parallel to the front struts and is not attached to them. It is therefore free to flex somewhat and will not break even under an impact that might completely remove the rigid structure.

One benefit of such a landing gear concept is that in the event of a hard impact that destroys the other structure, you are not eliminated from the competition. Your model can still be operated from the wire landing gear because the wheels are still in place. Another advantage is that with the wire in place, it 's easy to locate the rest of the landing gear structure and hold it in the proper position while the cement is drying.

The wing bracing on this model is made from two-pound test monofilament fishing leader. This material is available from sporting goods stores, Thrifty Drug, and many other places. A roll is fairly inexpensive, and will last for a lot of models. It makes nice smooth wires and can be tightened by holding over a source of heat. It can also be retightened, which makes wing warp adjustments fairly simple if you find they are needed during flight testing.

The fuselage bracing is simulated by inking fine black lines on the tissue covering after it is shrunk and doped. If you want more authenticity, use monofilament line to brace the fuselage before covering.

The wheels are by Fulton Hungerford, and although they should be tissue covered to match Karlstrom's 3-view, it just seems a shame to cover up those beautiful spokes.

The engine on the model is a true rotary. It rotates with the propeller. It was obtained from a 1/32 scale Fokker Triplane plastic model airplane kit, and modified to go on the propeller shaft. It looks great spinning around, but if you are interested in maximum duration I would suggest that you make it fixed and only rotate the propeller. The cylinders pump quite a bit of air as they spin around, and that takes energy which could be driving the propeller. Almost surely you'll pick up more flight points with the energy, than scale points with the 'rotary' engine.

The 3-view shows a pilot, and the pilot adds a lot to the airplane. The head was carved from styrofoam, as was the fur collar on his coat and the fur rim on his hat. The top of his hat was made from half of a medicine capsule (The medicine tasted awful, but a cap for the pilot was worth the sacrifice).

Tail skid structure was built up using model railroad basswood. Most other details were drawn in with black pen. The movable surface outlines and hinges as well as the step and baggage hatch are so depicted. The surface hinges are painted silver inside the small rectangles to simulate metal. The engine cowl is painted aluminum.

The fuselage is a simple box structure made of four longerons, uprights and cross braces. Build the two sides over the plans. When dry, remove from the plan, separate the sides and add the cross braces to the sizes shown in the top view. Then add the top and the side formers at the forward end, and the sheet balsa forward panels..." 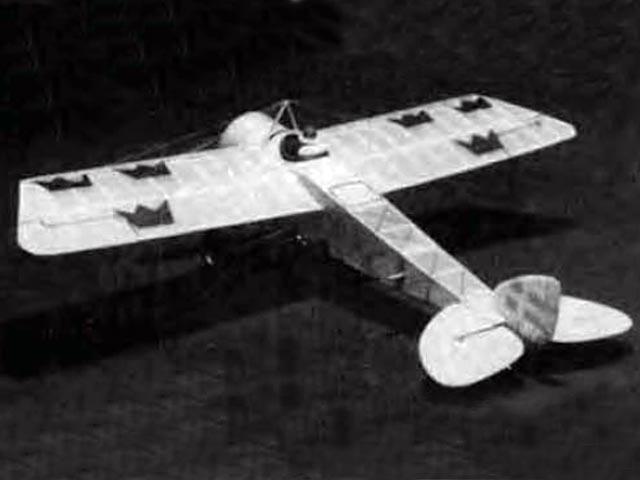