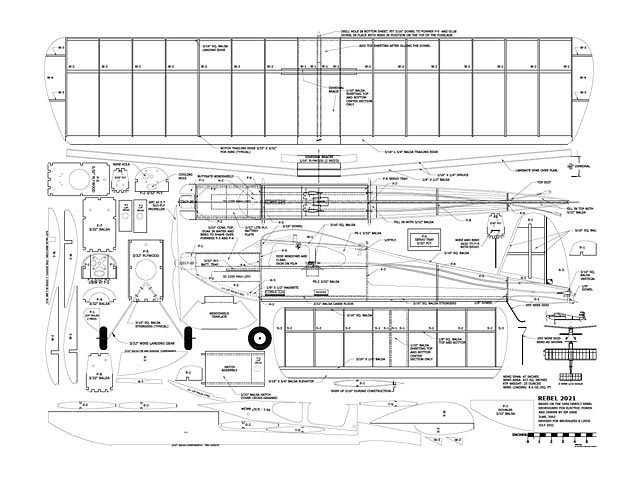 The original Live Wire Rebel (oz5553) was a single channel design by Hal DeBolt, kitted by DMECO in 1955. This here is a later version, redesigned for electric power.

Quote: "I just finished a redesign and build of the Debolt Rebel for contemporary electric power. There is a write up in RC Groups vintage category, see https://www.rcgroups.com/forums/showthread.php?395... for more details. Jim Zare."

Quote: "I have been a fan of Debolt Model Engineering kits since I got into RC in 1969. I bought a second hand Rebel with an OS Max 10 in 1970. I flew the heck out of it until I folded the wings in a power dive and loop. It was a fun flyer!

In 2002 I created an AutoCAD drawing for an electric powered Debolt Rebel using a Graupner Geared Speed 480 motor with Nicads. Bob Holman cut several sets of laser parts for this version which were built by friends. I bult one and flew it for several years until it was damaged in a crosswind landing.

While cleaning the hobby room I recently found a set of Rebel parts in a drawer and decided to build a version with contemporary brushless power, Lipos and a modern radio.

I had to touch up the 2002 plan and the result is the Rebel 2021 presented here. It is pretty close to the original 1956 Rebel with these modifications:

1. Planned for a Innova8tive Systems 2017-20 motor with a 3S 1800 or 2200 mah Lipo pack and a 20 AMP ESC. This will provide 150- 170 watts depending on prop selection.
2. Changed the center section of the wing to a flat section for easier alignment of a wing hold down dowel. This resulted in slightly less wing span and area.
3. The spar is laminated with balsa and spruce for strength.
4. Created a bottom magnetic hatch for battery insertion
5. Used piano wire landing gear instead of aluminum.
6. Landing gear was designed longer than the original for easier grass take offs.
7. Made the fuselage narrower.
8. Eliminated the bottom floor of the cabin.
9. Enlarged the rudder to make rudder rolls easier.

I was able to use most of the parts from 2002. It used the original Debolt airfoils and moments. I had to cut a new former for the motor mount and the hatch components..."

Note see see Jim's build thread on RCGroups at https://www.rcgroups.com/forums/showthread.php?395... for more details, some great pics, and a flight report. 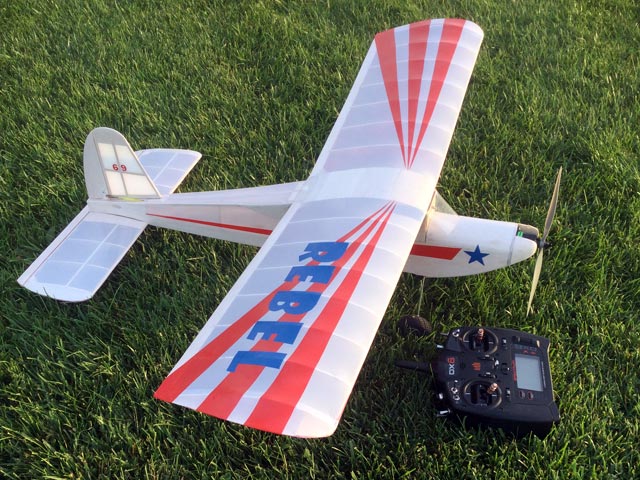