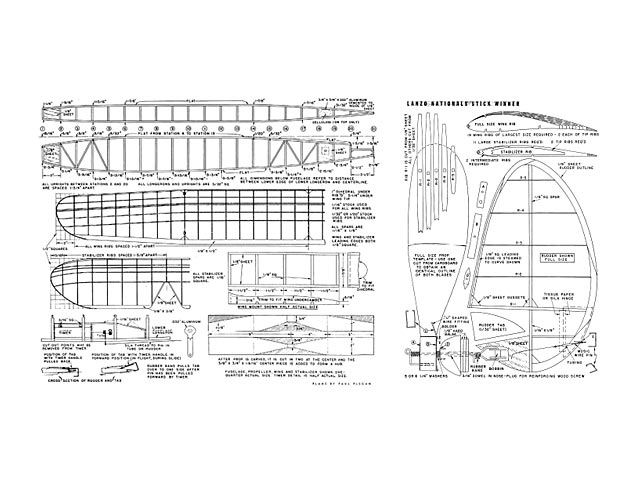 Note this is not a full size plan, this is a scan of the article and drawings as they originally appeared in the pages of Dec 1940 Air Trails. For an alternate full size version, see the later 1989 MB plan Lanzo Stick (oz3255) as redrawn by Phil Bernhardt.

MOST of the present-day rubber models have a wing area of approximately 200 square inches and weigh almost 8 ounces. This makes the average model 2 ounces overweight. When figured in percentage it gives one something to think about, and, with this thought in mind, I designed this stick model, which won the 1940 Open Stick Contest in Chicago.

I knew a large 300-square-inch model would not weigh much more than the former 200-square-inch job, yet it would have a larger wing area and a lighter wing loading. This would produce a ship with improved flight characteristics. The original model weighed 9-1/4 ounces.

On its first test hop this ship did 7 minutes and on its first official flew 14 minutes without gaining more than 300 feet altitude. Other contest flights by this ship went for 15, 10, 63, and 30 minutes. It is stable, consistent, and sensitive to the slightest risers. Second consideration was to produce a model of simple design and construction.

CONSTRUCTION The fuselage being of rectangular cross section, the usual procedure of building the two flat sides first, and then placing in the top and bottom cross pieces, was used. Details of the construction are included in the drawings. Before covering the fuselage round off the longerons and sand the outer framework, taking care that no bits of glue remain within the body, for if they do, they will surely cut the rubber.

The flight timer is optional and may be discarded if the builder wishes. Note that the usual rear hook has been dispensed with. A 3/16 dowel is slipped in place through the sides of the fuselage, and, in addition, small aluminum plates are cemented to the inside surfaces of the sheet-balsa fill-in. Upon finishing the nose block he sure to put in the proper amount of downthrust and sidethrust; otherwise the propeller blades will not fold properly against the sides of the fuselage. Paint a small red mark on top of both the nose block and the fuselage, so that the nose plug may be slipped quickly in place after winding.

When carving the prop try to leave as much blade area as possible. This will give maximum climb. When making the hinge fittings be sure that they are loose, so they will not bind after the tensioner catches. This might cause the plane to spiral in. The 1/16 holes in the prop and nose fittings should be a loose fit, so that the spring will pull the catch against the stop without binding. If the left-hand blade will not fold properly against the fuselage, a small rubber band will pull it up. Make two small hooks from .016 music wire and glue one at the trailing edge of the blade one inch from the huh. Glue the other one on the hub just one quarter inch from its center. To bend the prop shaft start at the bobbin hook, This hook should be square with the sides clamping the bobbin to prevent its turning and twisting, or 'climbing' the hook.

The bobbin has proved itself beneficial in preventing cuts in the rubber and rattling or wrapping around the hook.

The wing is of a high lift section and utilizes the multispar type of construction. Cut out the necessary ribs and assemble in the usual manner. Be sure to prop up the trailing edge with 1/16 balsa before cementing the ribs to it. If desired, the wing may be built in four panels. However, this necessitates getting the end ribs-on each panel at the proper slant to allow for dihedral. I have found bamboo tips the easiest to make. They absorb shock better than balsa.

The elevator is quite large. It is built in the same manner as the wing. The 1/8 square leading edge must be bent over steam and then baked in an oven for a few minutes to make it rigid.

The rudder is of a streamlined section and contains only one main spar. When gluing the rudder on the fuselage attach just the main spar, leaving the leading edge free to take turn adjustments. After adjusting the model the rudder may be fastened permanently in place.

Although E is given in full size, it may be necessary to make a second one (larger or smaller) to produce the right amount of turn in the glide. E is necessary if the flight-timer idea is not used. The flight timer does, however, tighten up the circle in the glide, enabling the model to stay in the thermals.

ADJUSTING: The hest climb and glide is obtained when the ship flies in circles of 400 feet diameter. Before putting the model into the air fully wound he sure the glide is perfect. In preliminary hand glides the leading edge should be at Station 8. A piece of 1/16 square under the leading edge of the stabilizer will improve the glide.

Side and downthrust may be adjusted temporarily with thin paper matehes. The nose block can be cut away or added to later. Wind the ship three quarters of the full amount of turns on hot days, as the ship will hit thermals at low altitudes. It has climbed ant cif sight on rubber run a lone.

The white rubber rope tensioner is used on the motor and the prop should fold hack at about forty turns. Use thirty-two strands of 3/16 flat brown rubber, 40 in long." 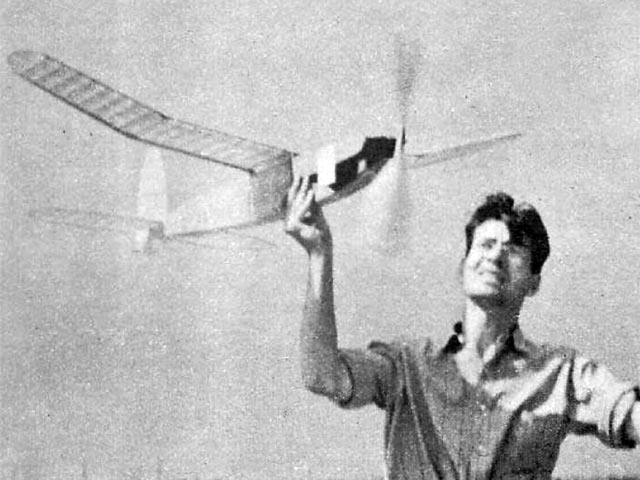