One of the world's best-performing home-built planes scaled down by one of the world's best designers. Result: a radio controlled model that performs almost like the real aircraft! We give you Cal Smith's version of Steve Wittman's famous W-9L. Not only did Smitty do the model engineering, he's responsible for this how-to article, the plans and photographs. By far the year's best R/C scaler, this is remarkably easy to duplicate. Strong? She thrives on rough treatment! For rudder-only use 15-size mill; multi takes a 19 for real 'he-man' performance

Steve Wittman's accomplishments in air racing and sport aviation make for a long and impressive record. His racers have been consistent winners and his sport aircraft which have always provided very rapid transportation are able to out-perform similar size and power factory-produced types.

Wittman Fan Club members will happily recall his Chief Oshkosh and his Curtiss Conquerer powered D-12 Bonzo of the late 30's. Champions of the Goodyear Race era were Buster and Bonzo. In the sport department the modern Tailwind had its ancestry in Steve's speedy Buttercup, a two-place cabin design built in the late 30's.

Credit must also be given for several design innovations developed by Wittman - the Scimitar propeller, spring-leaf landing gear (now standard on Cessna aircraft) and the tapered spring steel tube gear featured on the Tailwind, first used on Buttercup.

Simplicity and high performance keynote the Tail-wind design. That broad box-like fuselage may not be as handsome as some, but the smooth line from windshield to body top combine into an airfoil shape to gain lift from the fuselage. The 170-mph top speed is aided by a thin 9% wing section (NACA 4309 mod) and single strut bracing. The single tube landing gear produces a minimum of drag.

The Tailwind design offered to homebuilders by Wittman is his W-8. Fuselage is welded steel tubing as are the tail surfaces. Wings have wood spars and ribs and plywood covering. With the exception of the cowling and aluminum covered forward cabin section, the airplane is fabric-covered including the plywood wings. Various engines can be utilized including the 85 or 95-hp Continental and 108 or 115-hp Lycoming. Performance varies with the different power plants, averages are: Maximum speed 170-mph, cruising speed 150-mph, landing speed 55-mph.

Our model is based on the most recent Tailwind, the W-9L, built by Wittman for test purposes. It is basically the W-8 design with modifications. Wing span is shortened to 20-ft with area reduced to 80 sq ft. Wing tips utilize an aerodynamic shape designed to control tip vortices and spanwise flow which further aid performance and stability. Length is 19-ft 8-in. Most notable feature of the W-9L is its tricycle landing gear with castering nose wheel tube mounted with main gear. This gear design really absorbs the bumps while the aircraft literally floats along while taxiing. Engine in the W-9L is 160-hp Lycoming with Hartzell Constant Speed 70-in dia prop. Performance is upped with maximum speed at 200-mph, cruising 175-mph at 75% power, landing speed 60-mph.

The Model Tailwind: Few models we have built have turned in such smooth flying performance as has this one. This is because many of the big plane's good characteristics show up in the model. An unexpected bonus resulted from the airfoil fuselage shape. Exhaust oil is carried well up and over the top, leaving the model clean. We found the only concentration of oil on the fin top.

The model is very stable, turns smoothly, recovers to level flight quickly; climb is flat and glide is fast. With modest .15 power and rudder-only radio control it is an excellent up, around and down sport flyer. It is not a contest busting screamer. Nor is it a super-detailed Nats' winning scale job. Some compromises were necessary in favor of flying performance. Our miniature retains all the outward appearance of the big Tailwind but it is constructed with the idea that it is to do a lot of flying.

Concessions include a one-piece wing. Dihedral is 4° instead of zero as on the prototype. Airfoil thickness was increased to 12% (scale is 9%) to gain depth for spar strength. Wing is also partially openwork with fabric-covering, rather than being completely planked.

Fuselage structure is openwork, fabric-covered with members close to scale locations. Cabin area and nose are planked to simulate metal covering of original. Windshield and cabin windows are doped on over planking rather than utilizing open scale-like structure which in this area would be too flimsy in miniature. Horizontal tail area is increased over scale size. Vertical tail is scale size and full scale rudder is used.

One added feature found necessary for ease of handling: finger slots built into the fuselage bottom for no-sweat hand-launching! With the fuselage 6-3/4 in wide, it can be quite an awkward handful otherwise. The receiver switch can also be conveniently hidden inside one of these belly slots.

Our original miniature exhibited some ground-loving tendencies during its first flights. About 4° downthrust had been built in. This was removed and she now flies fine with 0° thrust line. Some right thrust is needed, however. Slightly more than a usual amount of negative stab incidence was needed to hold proper fore and aft trim.

Model is scaled at 2-1/4 inch to the foot, giving a wing span of 45-in, length 44-in and wing area of 397-sq in. Power on our original is an old K&B .15 Torpedo swinging a 9D-4P prop. With five pen cells or a medium battery load, a single channel receiver and an S-N escapement all-up weight is close to 3-lb. This weight and area is about right for a sport flyer, but if snappier performance is desired, you could go to a .19 engine. However, more controls will be needed to handle such power. There is ample room in the fuselage for additional R/C gear, but don't go overboard. Remember that wing area is under 400-sq in.

As is, this model Tailwind looks like a real airplane. And we ain't just whistlin' Dixie when we say her flight performance is a joy to behold.

Fuselage Construction: Begin by building complete side frames over the fuselage side view. Note marks above and below longerons showing upright positions when frame is built flat. Assemble one side frame and let dry thoroughly, then build second side directly over the first to insure identical sides. To prevent cementing the two together during building put patches of thin tracing paper (not waxed paper) over joints of first side before pinning down second side parts..." 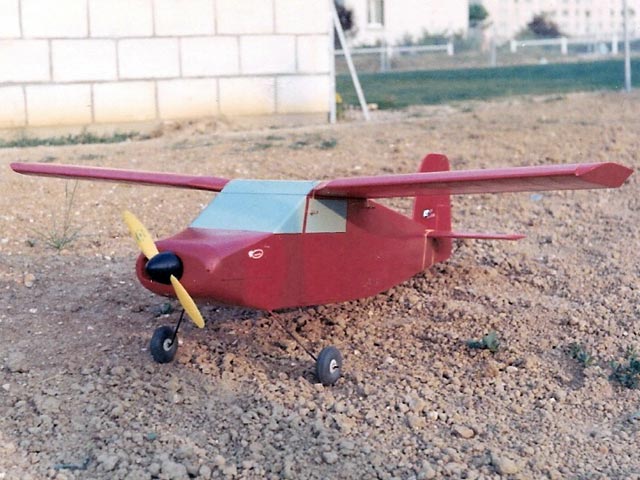 Been looking for this for ages! Huzzah and thanks
Charles - 25/08/2021
Steve, Thank you very much for cleaning up this plan and posting it. The picture shows my example built in 1965 and flown rudder-only. It was powered with a Fox 15 and first controlled by a Babcock compound escapement, later by an OS motorised single-channel servo with home made radio. Flying behaviour was all as the designer claimed. In fact a modeller airman from the neighbouring airbase was so taken by it he finally convinced me to sell the model to him. As a "replacement", I built the Hoh-Fang-Chiun Bébé Jodel (oz6939) which was another great flyer.
Jean-Marie Piednoir - 27/08/2021
Add a comment